The city of Warrenton is taking advantage of federal COVID relief funds to supplement employee raises as part of an $18 million spending plan for the next fiscal year. 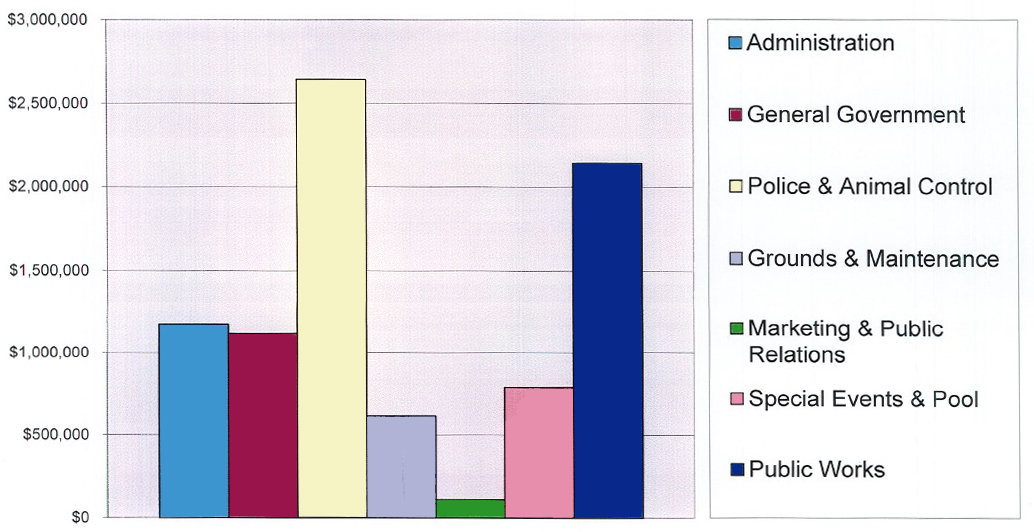 OPERATING COSTS — This graph shows how nearly $9 million in operating expenses for the next year are allocated among the city of Warrenton’s different departments. Separately, the city is also budgeting about $6 million for major projects and equipment purchases, and about $3 million for debt payments.
City of Warrenton image
Posted Monday, July 4, 2022 5:00 am
Adam Rollins, Staff Writer

The city of Warrenton is taking advantage of federal COVID relief funds to supplement employee raises as part of an $18 million spending plan for the next fiscal year.

It’s the second year in a row Warrenton has issued larger-than-normal pay increases, with a 7-percent payroll boost last year aimed at competing with the private market.

Warrenton is planning to spend about $6 million on public improvements and facilities over the next year. Over half of that is money carried over from the prior budget for construction projects that were funded, but not yet completed, according to city finance officer Dana Belaska.

Nearly $9 million will go to Warrenton’s daily operations, including staff payroll, while over $3 million is dedicated to paying the city’s debts for previous major projects.

Those costs would be paid for using a combination of $14 million in taxes and utility fees the city anticipates receiving this year, along with $15 million the city already has in the bank.

The use of ARPA funds, the most recent federal COVID relief money, to boost employee pay was a last minute addition by aldermen.

“We spent quite some time ... trying to come up with a reasonable expense for payroll to help retain our good employees,” commented Ward 3 Alderman Gary Miller.

Covering the gap between a 3 percent and 5 percent payroll increase will require about $57,400 in ARPA funding, along with an extra $18,200 from the city’s dedicated transportation and water/sewer funds, said City Administrator Brandie Walters.

Walters said the use of ARPA funds will make up for lost revenue and increased expenses incurred during the COVID pandemic. Over the next few years, the city plans for the ARPA portion of payroll to be replaced by tax income from new economic growth.

“We look forward to seeing the new approved housing developments, coffee shop, and gas station which will increase our tax base in the coming years,” Walters commented.

"As everyone knows, short staffed is the norm everywhere currently and we are no different," Walters added. "We hope that the higher payroll increase will help us retain the wonderful staff we currently have, as well as increase our starting wages to possibly fill some of our open positions.

The payroll support is only a small portion of the $1.7 million ARPA funds that Warrenton is receiving. Another $1.2 million is budgeted for equipment purchases and park improvements. The largest costs among those are:

About $6.3 million is budgeted for Warrenton’s general fund that pays for most city operations except for public works and major projects. By far the largest single portion of this budget is for Warrenton’s police department, which this year is allocated nearly $2.5 million.

The next largest spending areas for general operations are administrative staff ($1.1 million), the Warrenton Aquatic Center ($665,000), and grounds/facility maintenance ($614,000).

In the city’s funds that supply public works operations, Warrenton has about $520,000 for street maintenance and $1.7 million for water/sewer operations.

Over $6.4 million is allocated to major projects and equipment purchases over the next year (including the ARPA funds above).

$482,000 is budgeted for street department projects, including paving on eight roads and improvements to a public works shed.

$2.8 million will go to Warrenton’s sewer system, in large part for major stormwater construction across the city and ongoing installation of new sewer mains.
Just under $1 million in funds specifically dedicated to the area around the West Warrenton Interchange will be used to increase waterline capacity for future development in that area.

On top of the money that Warrenton is spending for public improvements in the next year, the city is also still paying for major projects in years past. Over $3 million is allocated to debt on these past projects:

Warrenton Board of Aldermen, Budget