Victim in near-fatal crash gets to meet rescuers

First responders rarely get the opportunity to meet with victims they treated at horrific accident scenes. On Saturday, Nov. 20, members of the Marthasville Fire Protection District (MFPD) and the …

Victim in near-fatal crash gets to meet rescuers 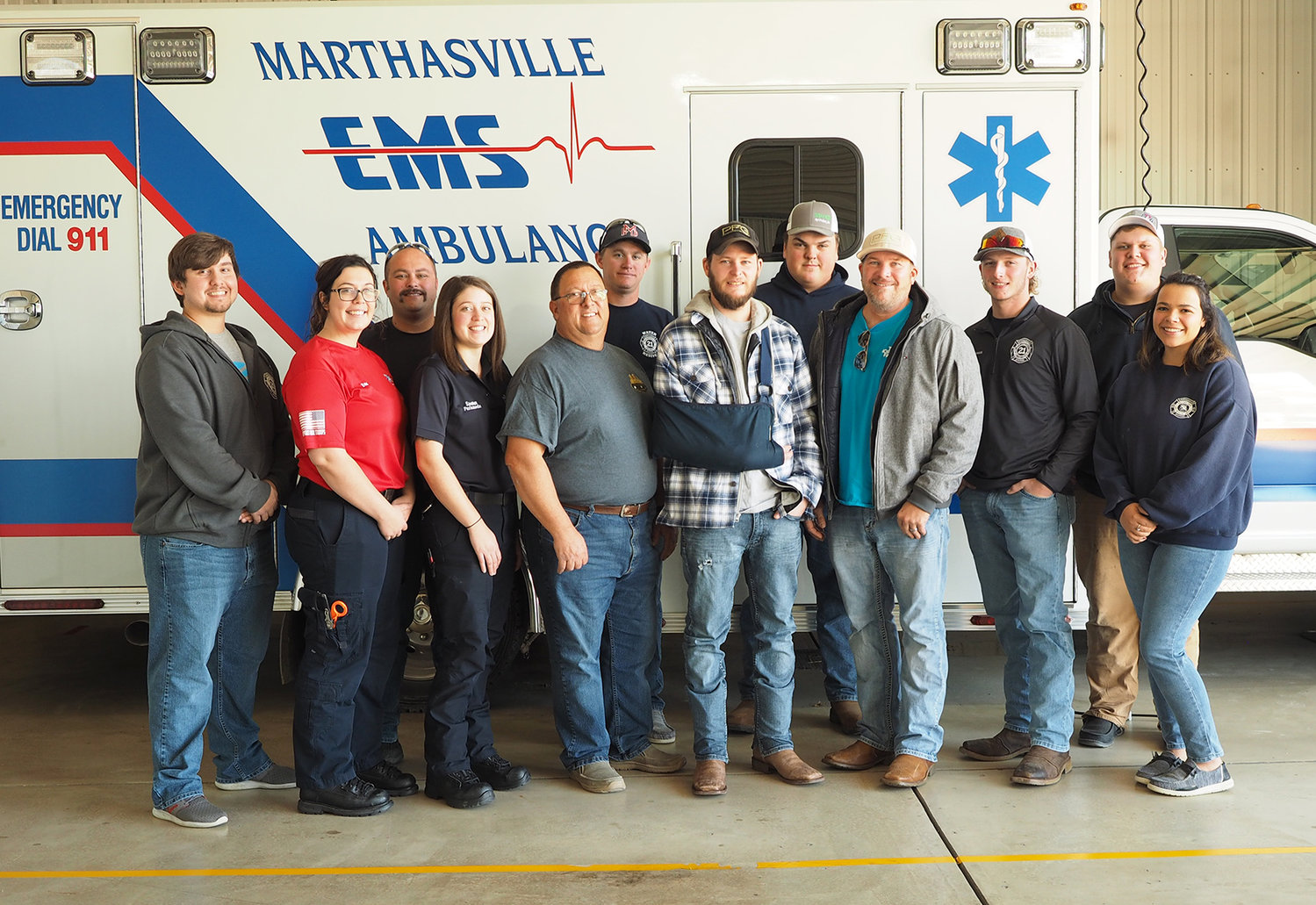 Britton Gillette, center, with his dad Michael Gillette to the right of him, met with first responders Saturday, Nov. 20, to thank them for helping him survive an accident that occurred Aug. 1. Also pictured with Gillette are some of the members of the Marthasville Fire Protection District and Marthasville Community Ambulance District who were on scene that day.
Cindy Gladden photo 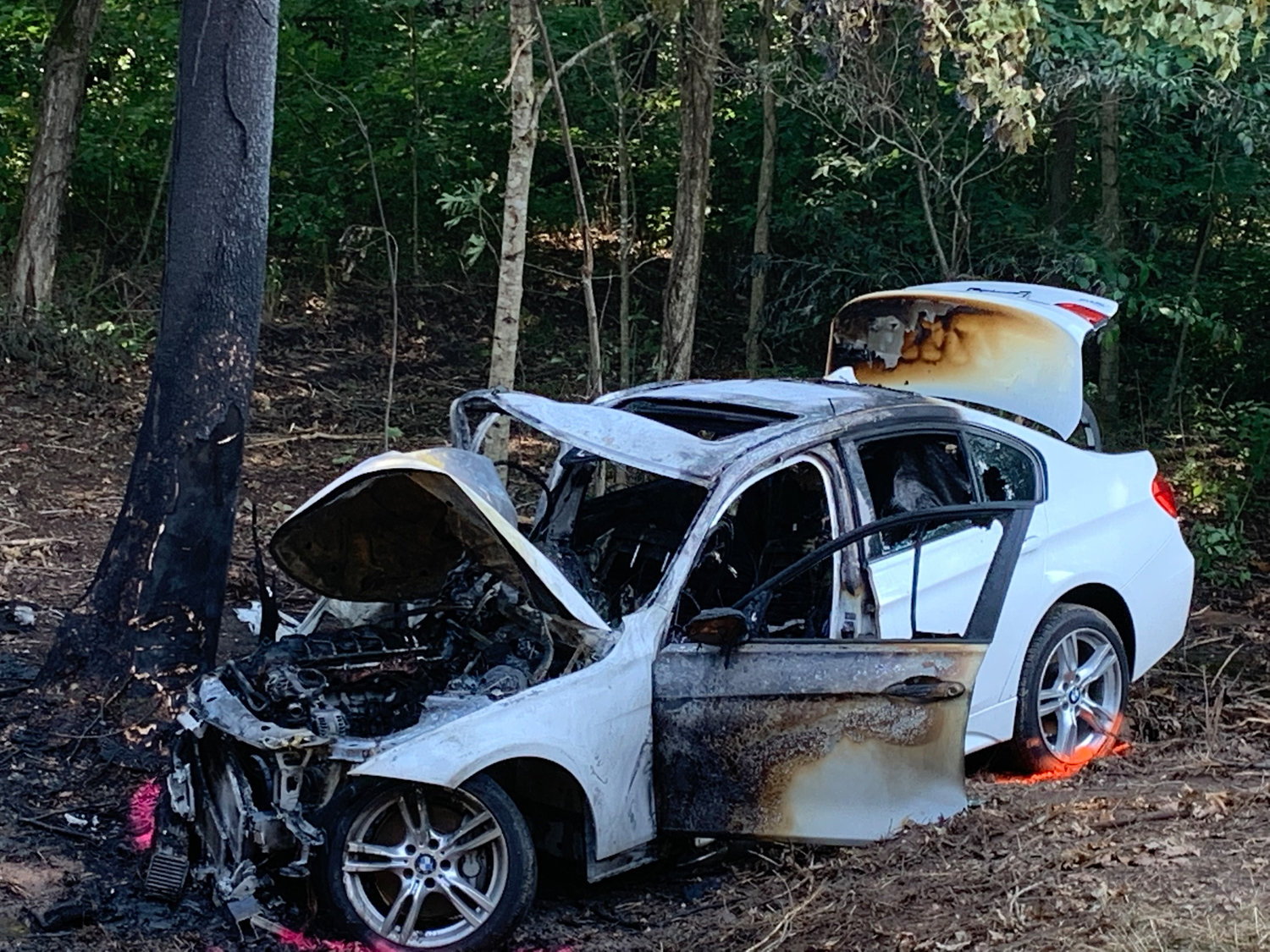 FIERY CRASH — The vehicle Gillette was riding in struck a tree and burst into flames. Three occupants were pulled from the vehicle by passersby. All three occupants were injured. Gillette has no memory of the accident and was in a coma for three weeks following the accident.
Marthasville Fire Protection District photo
Previous Next
Posted Thursday, November 25, 2021 5:00 am
Cindy Gladden, Correspondent

First responders rarely get the opportunity to meet with victims they treated at horrific accident scenes. On Saturday, Nov. 20, members of the Marthasville Fire Protection District (MFPD) and the Marthasville Community Ambulance District (MCAD) sat down with a young man they didn’t think had a chance of surviving injuries he received in a motor vehicle accident.

Britton Gillette, 27, Washington, doesn’t remember riding in the back seat of an acquaintance’s vehicle or crashing into a tree. On Saturday, August 1, that vehicle burst into flames on impact with three occupants inside. Passersby were able to pull the victims from the vehicle. Fortunately, a group of retired police officers were riding their motorcycles behind the vehicle and immediately began first aid efforts.

First responders from Marthasville agencies quickly began arriving at the scene on State Highway 94 near Dutzow. Chris Pitucha, responding from MFPD Station 3, checked the vehicle for other occupants and immediately began rendering aid to one of the victims. Although Pitucha and Gillette were friends, Pitucha didn’t recognize his friend in the urgency to help him.

During his assessment, Pitucha realized that Gillette was not breathing.

CPR was performed and Gillette was able to be revived. It wasn’t until the helicopter delivered him to Mercy Hospital in St. Louis, that it was revealed his pulmonary artery had been severed. That injury alone should have killed him. Michael said he was told the brain injury his son also experienced was one of the most serious possible.

Meanwhile, Gillette’s family was waiting for him to show up for a birthday party for one of their eight children. Britton’s dad, Michael, felt it was odd for Britton to be late. That was when the call came.

Michael said they told him it didn’t look good for Britton and that he should get to the hospital immediately. He told the family they needed to start praying for their brother.

Britton was in a coma for three weeks. It had taken four hours to repair the pulmonary artery and many surgeries, too many to count, occurred after that. Michael said doctors were not hopeful. He didn’t open his eyes until five weeks following the accident, although even then, he was not responsive.

“They tried every bit of technology they had,” said Michael. “Tell me about God and that technology.”

Michael said it took a couple of weeks to convince his medical team that Britton was responding by blinking his eyes.

“He was in there,” said Michael. “I knew that my son was there.”
Although doctors had little faith that Britton would ever walk, talk or function normally again, Britton’s recovery has been miraculous. He returned home in late October.

“Without you guys, I would never have had a chance,” said Britton to the first responders.

“Thank you for coming. We don’t get this often,” said Asst. Chief Sean Johnson. “It motivates every one of us. You’re an example of why I leave my family to respond to a call.”

Spencer Portell, of the MCAD, said once their ambulance team hands over a patient, they rarely get to hear how their patient is doing.

“To have this side of it — it’s rare, much less to have it be a good thing,” said Portell.

Michael Gillette thanked the first responders profusely. He emphasized that his family decided that fear and faith could not “roam in the same place” and they put Britton in God’s hands through the entire ordeal.

“This is my boy,” he said. “Thank you to anybody that was there for him. You brought my son back to me and him back to his son.”

Britton’s recovery has required a lot of hard work on his part, but he is slowly returning to a new normal. He will continue to hit the treadmill and endure treatment to his right arm to regain more function. Britton’s dad, who was at his bedside each day, knows that Britton is defying medical explanation and is grateful for the miracle of his son.

Britton said he learned a lot from that day.

“I thought nothing could take me down,” said Britton. Now I’m afraid to hit a bump with a bicycle. Just because I escaped this one does not mean I will escape another.”