William Truesdail, buried in Bunker Hill, Ill., was a railroad pioneer who founded Truesdale and became a Union spymaster

The city of Truesdale has a history to tell and a desire for residents to find importance and meaning in the story of their town and its founder, William Truesdail. That's the motivation behind a …

William Truesdail, buried in Bunker Hill, Ill., was a railroad pioneer who founded Truesdale and became a Union spymaster 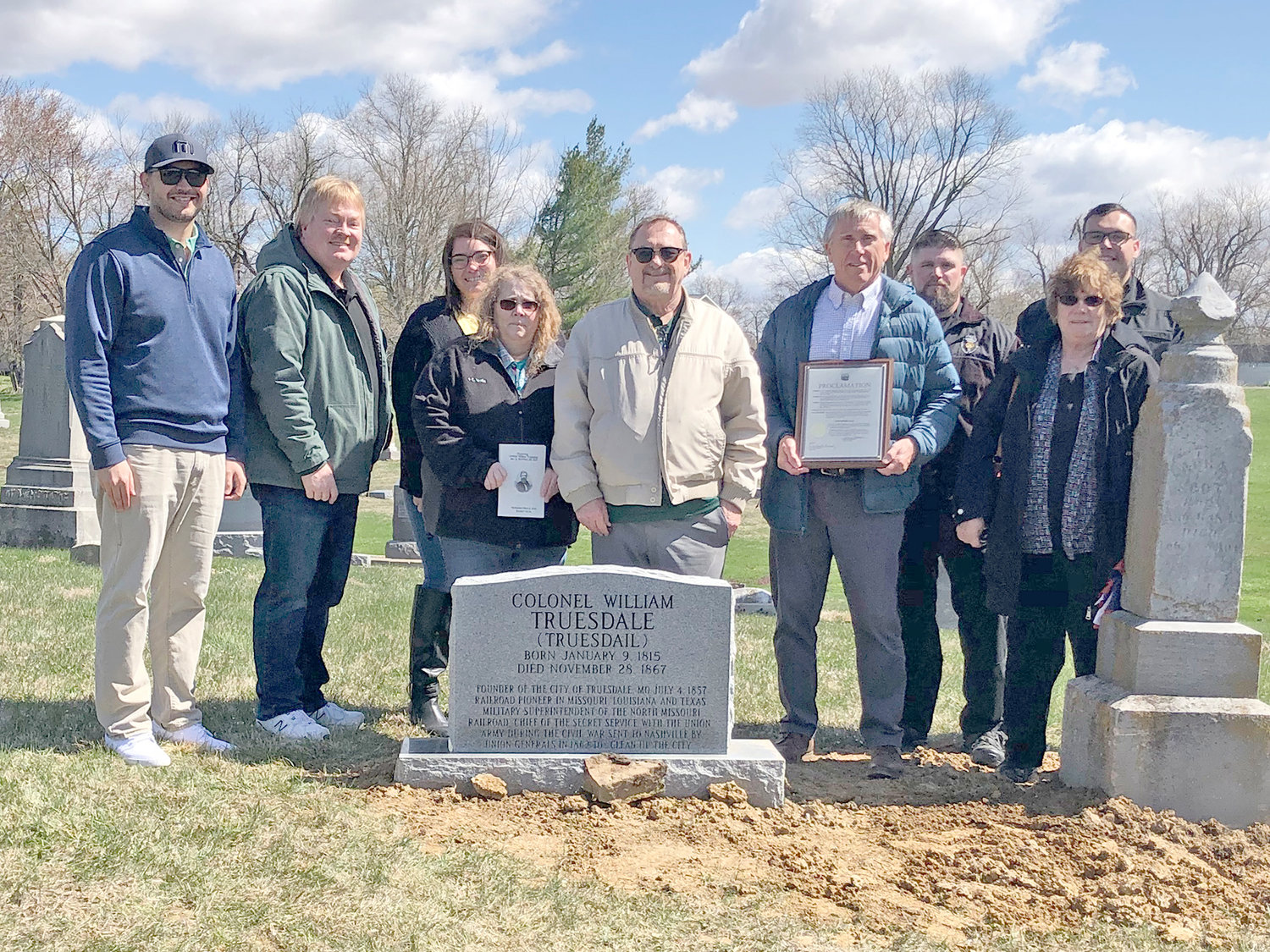 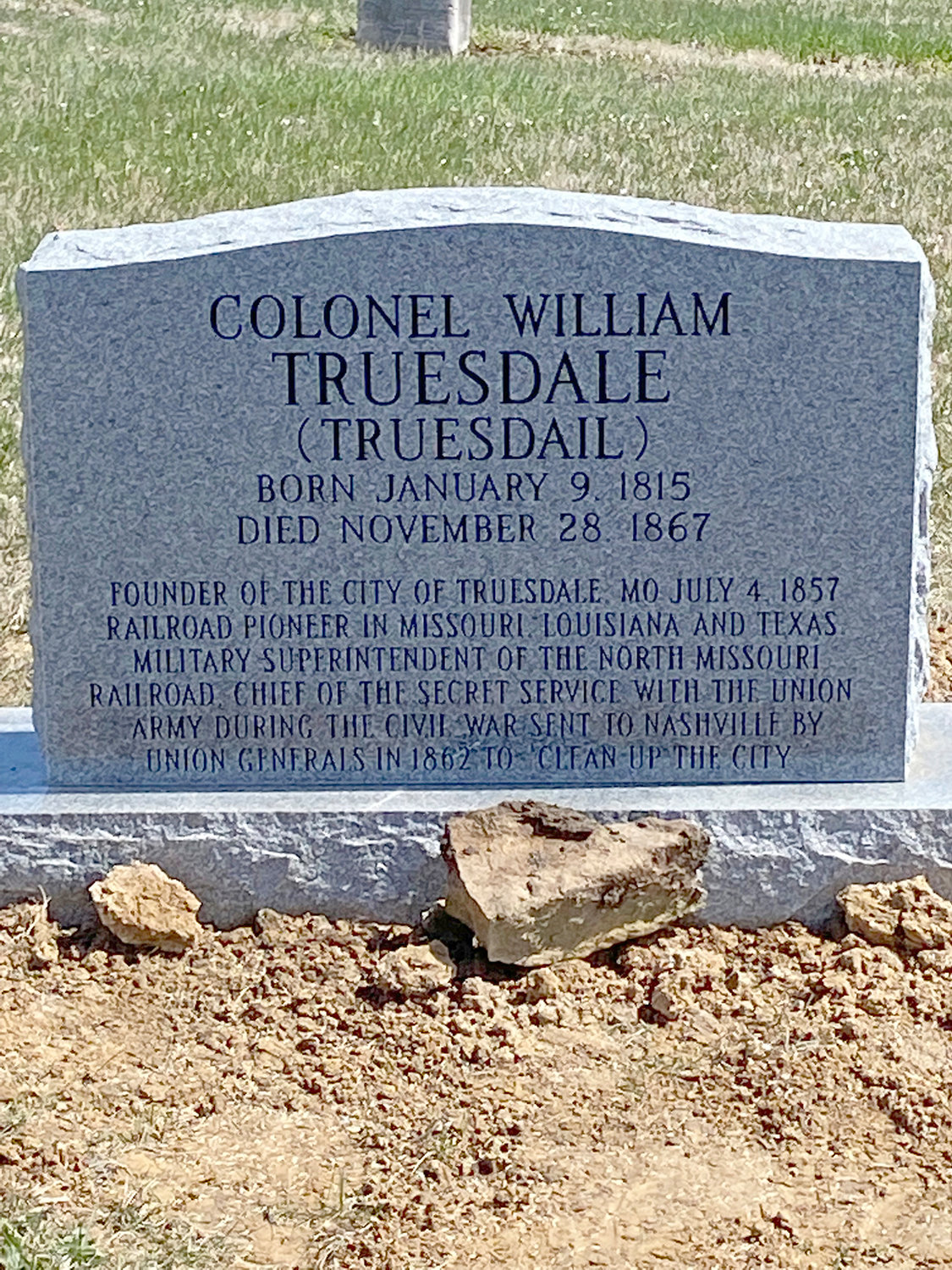 PRIDE IN HISTORY — Community members fundraised to purchase a gravestone for William Truesdail, who had no grave marker following the destruction of a 1948 tornado. The new marker notes the founding of the city of Truesdale, along with the founder’s railroad pioneer work and service during the Civil War.
Submitted photo
Previous Next
Posted Friday, April 22, 2022 5:00 am
Adam Rollins, Staff Writer

The city of Truesdale has a history to tell and a desire for residents to find importance and meaning in the story of their town and its founder, William Truesdail. That's the motivation behind a year-long fundraising effort by city leaders to collect community donations and use them to pay for a granite monument over the unmarked grave at Truesdail’s burial site in Bunker Hill, Illinois.

A ceremony to unveil that monument was held on Saturday, April 9, in Bunker Hill. Truesdale Alderman Jerry Cannon, the current leader of the memorial project, said getting that monument erected was deeply important to him as someone who loves his hometown.

“It has to do with the pride of our town, the history of our town. The very history of Truesdale started with him. It’s about going back and looking at the roots of our city,” Cannon said. “Truesdale, as a town, has really needed that. I’ve lived here all my life, 62 years, and I know the ups and downs of this little community. It hasn’t always been looked upon favorably.

“We want to tap into our history to develop a pride in Truesdale that will help us to move forward, to grow, to be the community we can be,” Cannon added. “If we want to grow and make things better, I think that’s really important.”

Cannon, who is a history teacher, also explained the odd difference in how the town founder spelled his last name — Truesdail — and how the city’s name is officially recorded. He said in the early years after the town was founded in 1856, different documents spelled the name in different ways, eventually settling on the altered spelling. Truesdail himself wasn’t around to correct the mistake because he had moved to help build a railroad in the south, then took up service for the Union Army in the U.S. Civil War.

History of Truesdail and Truesdale

Attendees at the ceremony for William Truesdail’s monument were presented with a history of the town founder, preserved by members of his family and supplemented with additional research by Cannon.

William Truesdail lived in the Northeast U.S. in the early 1800s before becoming a traveling railroad pioneer, working in the U.S. and internationally. In 1856 he purchased 932 acres in what is now Warren County, and plotted a small town along the route of a new railroad line. Truesdail donated land for a train depot in exchange for recognition of his name as the name of the town.

In 1860 Truesdail began a new railroad project from Louisiana to Texas, but just a year later left to take up the cause of the Union in the Civil War. He was eventually named as a chief of secret police — a spymaster — and deployed to Nashville, Tenn., to root out Confederate supporters.

After the war, Truesdail fell ill and followed his doctor to the area of Bunker Hill, Ill., where he later died and is currently buried along with several family members.

The interest in restoring the connection between the town of Truesdale and its founder began with one of his descendants making a connection with city leaders.

Truesdail's great-great-great grandson, Steven Williams, said his grandmother and mother had preserved their family’s history, and passed on their stories to him. During a road trip in about 2002, Williams said he happened to pass through the very town that was named for his ancestor Truesdail, and he arranged to come back and visit. There he met then-City Clerk MaryLou Rainwater, and they exchanged information about the two sides of their historical stories.

Several years ago, Rainwater took a group to Bunker Hill to visit Truesdail’s burial site, and learned that any gravestone for Truesdail had been destroyed, along with much of the cemetery and surrounding town, by a severe tornado in 1948.

“I always thought it was sad that this man who gave so much didn’t even have his own tombstone,” Rainwater said. “He gave a lot, not just for this area. ... We decided that we wanted to do something.”

Rainwater began the process of establishing connections with the local Bunker Hill Historical Society and planning for a new monument, then city officials worked together to organize community fundraisers and see the project through.

Williams said he was grateful that someone cared enough to provide that honor for his ancestor.

“It’s impressive they care enough about their city to actually go to that trouble. And they’ve now made a connection between Truesdale and Bunker Hill,” Williams commented. “Unfortunately in this day ... you just don’t get people who connect like they used to. So when you get people with a common interest like this, that was pretty neat.”