More senior homes in the works for Warrenton

More senior homes in the works for Warrenton 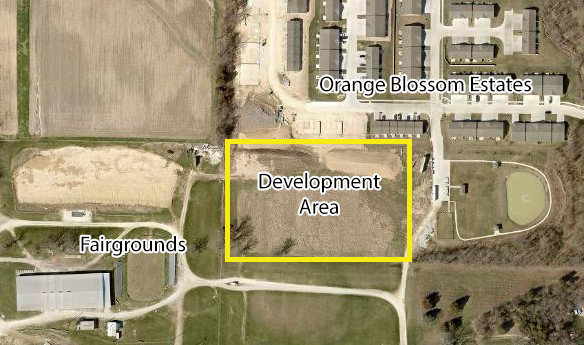 The builder of the Orange Blossom Estates senior living homes in Warrenton is taking over an unused corner of the Warren County Fairgrounds property to expand the senior community with additional apartment buildings.

Orange Blossom Estates is an age-restricted community that provides housing specifically intended to be accessible and relatively affordable for older adults. The community is accessed from North Highway 47 and borders the north side of the fairgrounds.

Orange Blossom developer Ed Schmelz last year purchased a 4.5-acre field from the Warren County Fair Association, located at the northeast corner of the fairgrounds. The field currently goes unused except for sporadic parking during events. The developer plans to transform the field into nine new apartment buildings with 36 total units on the south side of Orange Blossom Estate, according to site plans.

Before any of that can happen, the Orange Blossom expansion must be approved by the Warrenton city government. City ordinance requires any multifamily development to go through a special approval process, starting with the city’s citizen planning and zoning commission and ending with the board of aldermen.

Warrenton Director of Operations Jon Struckhoff explained that approval for the project requires zoning the lot for high-density residential development, an additional permit for multifamily homes, and approval of the building site plan.

“It’s a white, vinyl privacy fence to separate our residents from the fairgrounds. It’s not often they have (events), but when they do it’s quite a bit of noise,” commented Schmelz.

The expansion project was presented to the Warrenton Planning and Zoning Commission, a citizen advisory group, on Jan. 6 and received unanimous recommendations for approval.

“You’re to be commended on what you’ve done there so far,” said commission chairman Rich Barton. “It’s very nice, it’s got plenty of walking areas for your people. Gazebos, picnic areas, a pond. Everything looks really nice and it’s well kept up. I think you’ve been a good addition to the city.”

Barton said the only complaint he’s ever heard about the Orange Blossom community is that Highway 47 (a state road) needs a turn lane to avoid traffic backups at the entrance.

The Orange Blossom expansion will go to the Warrenton Board of Aldermen for final approval on Jan. 18.

Warren County Fair Association President Paul Owenby said the parcel sold to Orange Blossom saw no use except to provide unnecessary extra parking. The plot was purchased when it came up for sale more than a decade ago, by previous fair association members who were thinking of future expansion that didn’t come to pass, Owenby said.

“The board thought for potential expansion it was a good price, but over the last 15 years we’ve never needed that parcel other than parking one week out of the year,” Owenby said. He explained that current association leaders believed the best financial decision was to sell that land for funding to improve what the existing fairgrounds has to offer.

“They’ve built a really nice community over there, and they’re awesome neighbors,” Owenby said. “They help keep an eye on our property, and they understand that a few times a year we have an event and there’s some noise.”