Beginning this semester, the experience of being a student at Black Hawk Middle School in Warrenton is a little different and a little more interesting. School administrators and teachers, enchanted … 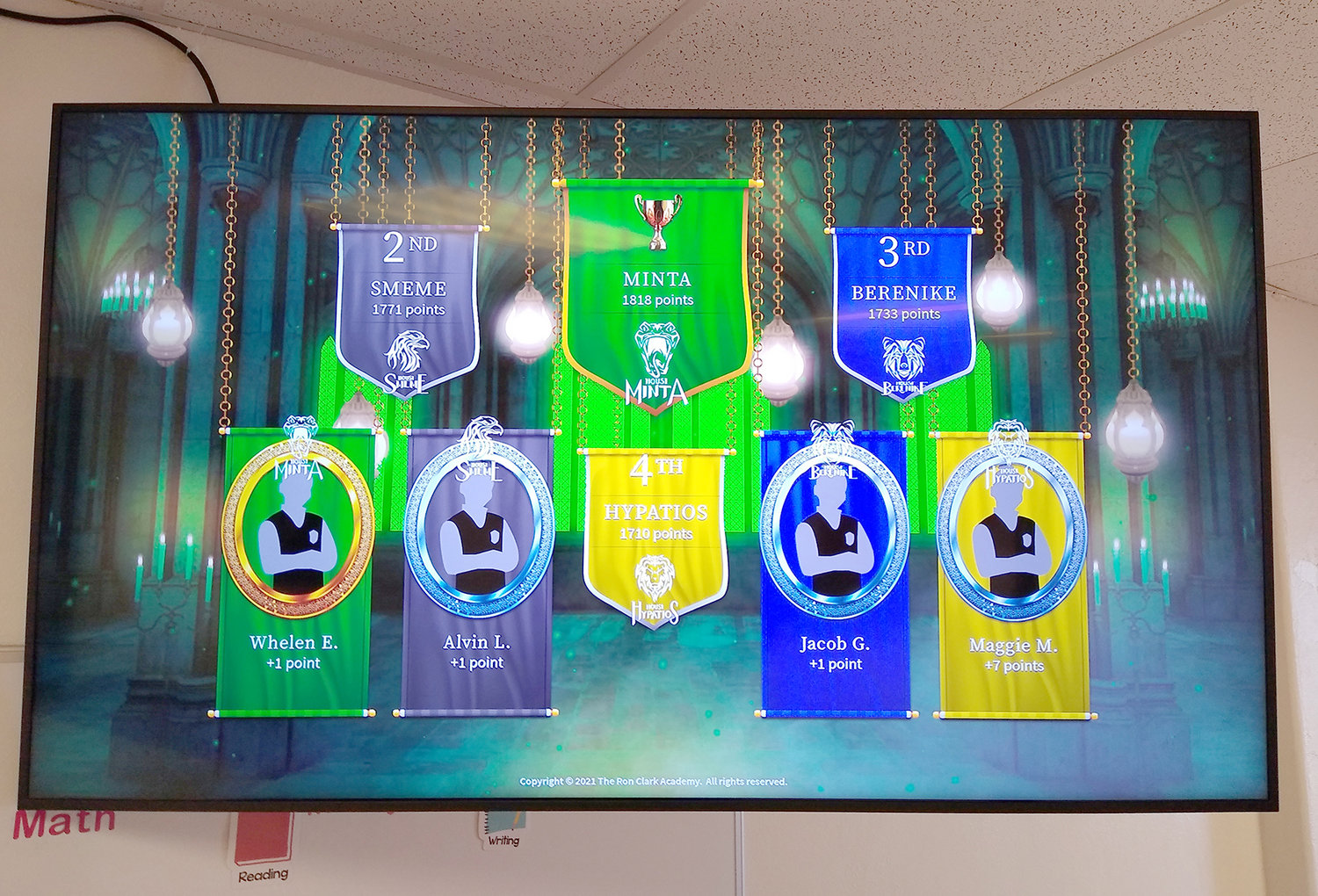 POINTS FOR GOOD DEEDS — A large screen at the entrance of Black Hawk Middle School shows the point rankings of four Harry Potter-style ‘houses’ at the school. Students earn points for their houses by being positive examples for others. The most recent point earners and current house rankings are updated live throughout the day.
Adam Rollins photo
Posted Monday, November 15, 2021 5:00 am

Beginning this semester, the experience of being a student at Black Hawk Middle School in Warrenton is a little different and a little more interesting. School administrators and teachers, enchanted by the idea of a stronger school community, have introduced a “Harry Potter”-style house system, in which students learn positive social skills and compete to see who can do the most good in school.

Just like in the well-known book series, students are awarded points for their house whenever a staff member sees them modeling positive behaviors. Points are updated live via smart phones, with the totals visible on a large screen at the main entrance to the school.

That healthy competition, where students are challenged and motivated to develop positive behaviors, could eventually transform the culture and community within the middle school, said Principal James Allison.

“The more we tell kids they’re doing well, the more they want to do well. If all you’re doing is telling kids what they’re doing wrong, they have zero motivation for doing well,” Allison explained. “I envision discipline numbers going down, academics going up.”

The names of the four houses of Black Hawk Middle School — Berenike, Hypatios, Minta and Smeme — are based on Greek root words associated with positive character traits. The root words have been modified so that the first initial of each house spells out “BHMS.”

Students and teachers were all assigned to houses through a random lottery at the beginning of the year. House assignments will stick with students all three years of middle school, and is even permanent for teachers, Allison said.

House assignments don’t affect what classes students are in, but every couple weeks, students and teachers break from their normal class structures to meet in small groups with other members of their house and do character-building activities.

“We use that ‘house time’ to build non-academic skills that we think are important to being a member of our society,” Allison said, commenting that the house structure allows students from different grades to have more interaction with one another. That provides an opportunity for older students to be positive role models and build connections with their younger school mates, offering help, advice and support.

Allison said school administrators would eventually like the houses to start planning external community service activities and building a history of the positive actions they want to be known for. But for the moment, school leaders are trying not to do too much, too quickly, and are focused on building community within the school.

Allison said that the idea for translating a house system into a public school originally came from a school in Atlanta called the Ron Clark Academy, which he said has had tremendous success using a similar system to bring up students who are academically successful and have strong character. Allison has previously visited the academy, and has plans to bring other middle school administrators to visit in the near future as well.

Thus far, Allison said the house system seems to be getting a positive start here, making him optimistic to see what the school will look like in the future.