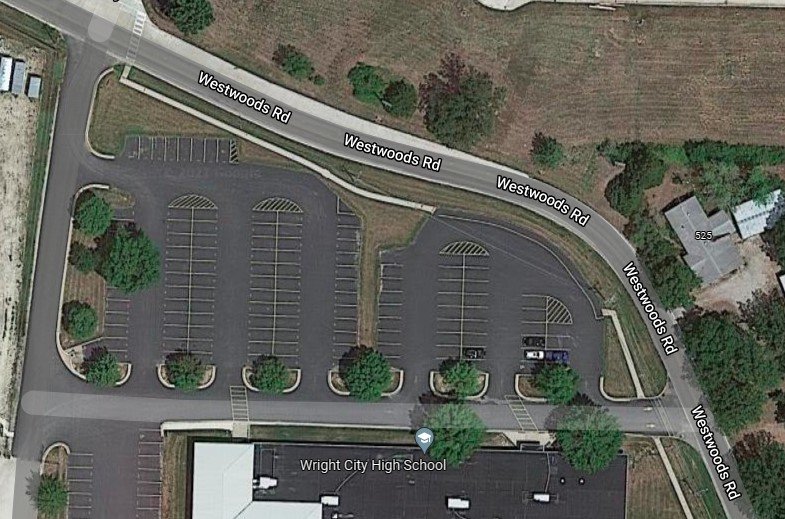 Wright City leaders are trying to figure out how to tactfully prevent parents at Wright City High School from unintentionally damaging a high-dollar infrastructure project right after it was built.

The problem is that parents are parking their cars on the sidewalk along Westwoods Road while waiting to pick up their kids from school, aldermen said during their Nov. 18 public meeting. The city recently spent about $540,000 to rebuild that section of Westwoods Road, including installing new sidewalks.
The concrete for the sidewalks was built to hold people, not cars. The weight of vehicles could quickly damage the paving, city officials said.

“We just poured that sidewalk. They can’t be driving up on it, because then the next complaint will be ‘Now our new sidewalk is all broken,’” said Mayor Michelle Heiliger.

It’s a tricky issue that arises from a lack of parking or space for pickup and drop off at the high school. Alderman Nathan Rohr commented that while school is releasing, parents’ cars can be backed up far down the street.

To expedite that pickup process, parents often have their kids just come to where their car is parked in the street, City Administrator Jim Schuchmann said. Then, to allow room for those parents’ vehicles to leave after pickup, many people have gotten into the habit of pulling off the side of the road and onto the sidewalk.

Having to wait in traffic at the school is a relatable frustration, and aldermen said they understand why people are choosing to park on the sidewalk. But at the same time, they said they can’t allow people to cause damage to city property that will require tax dollars to fix.

City leaders discussed multiple potential solutions to keep people from parking on the sidewalk, starting with the suggestion of police traffic enforcement. Alderman Ramiz Hakim said he doubted that would resolve the issue.

“You can say ‘Hey don’t do this,’ but that’s not going to change the behavior. You can even ticket, but there’s so many of them,” Hakim said. He proposed putting up barriers along the road, such as concrete bollards.

That suggestion was countered by the observation that concrete barriers would add even more expense to an already-costly project area. Alderman Karey Owens noted that in a couple years, the Wright City School District plans to begin construction of a new high school location on the south side of the city.

“I don’t think it would be a good use to spend a bunch of money on barriers when, hopefully, in a couple years the high school will be out of there,” Owens said. She speculated that the problem might also be temporarily heightened by the COVID pandemic continuing to incentivize sending kids to school in individual cars, instead of on crowded buses.

But the city doesn’t have two or three years to let the problem resolve itself, because the sidewalk will be destroyed by then, Mayor Heiliger said.

City staff proposed a middle-ground solution: Erecting brightly painted metal posts between the road and the sidewalk that would highly discourage any car from pulling off and potentially hitting them. The city already has a stock of the posts and paint, and if they end up looking tacky, the city can easily remove them in the future, Schuchmann said.

The aldermen gave their blessing to this plan, which Public Works Director Kyle Roettger said will be put into action shortly.