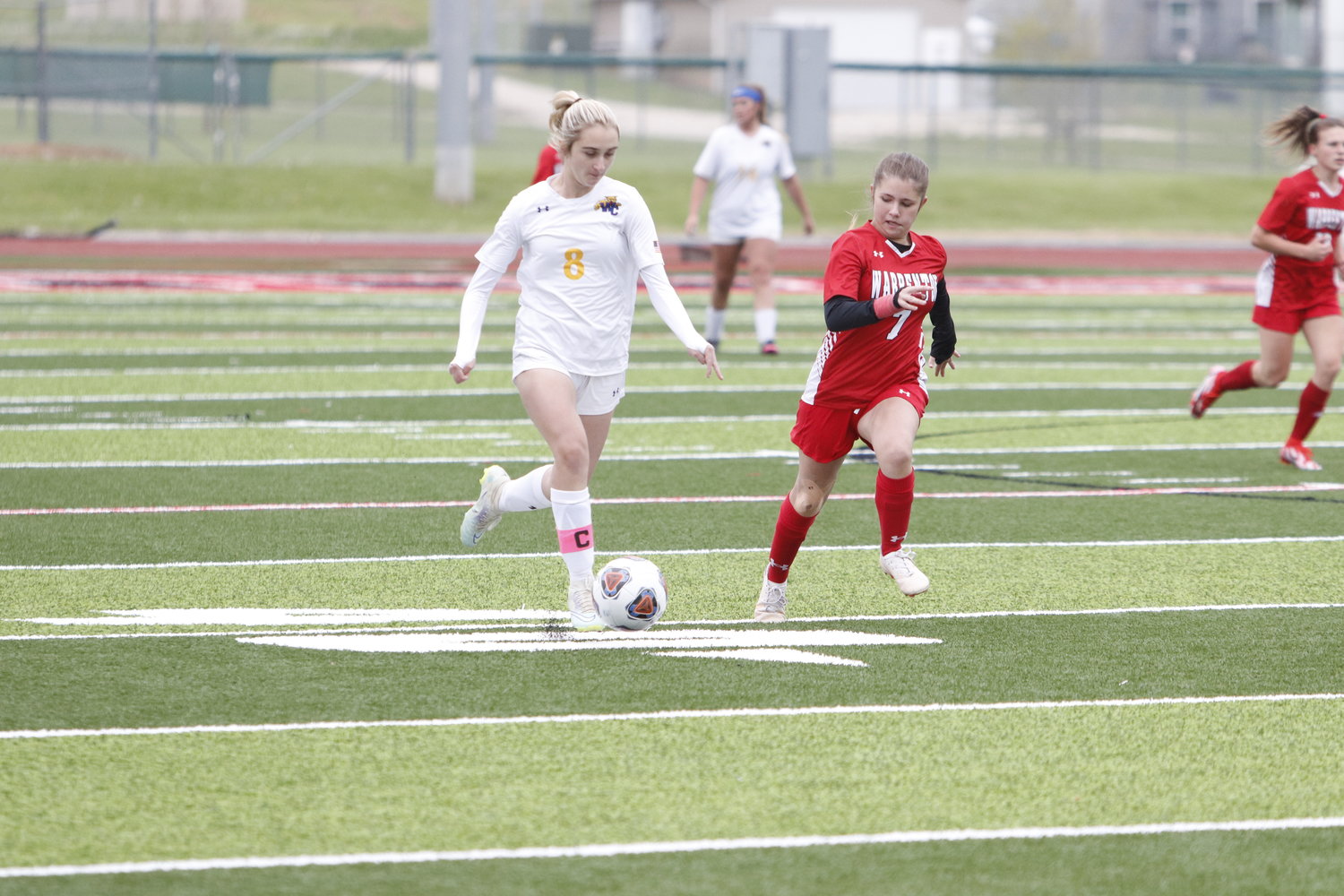 Alex Sutter (left) attempts to move the ball towards the goal in the first half of last week’s game as Ashlynn Reeves trails the play.
John Rohlf photo 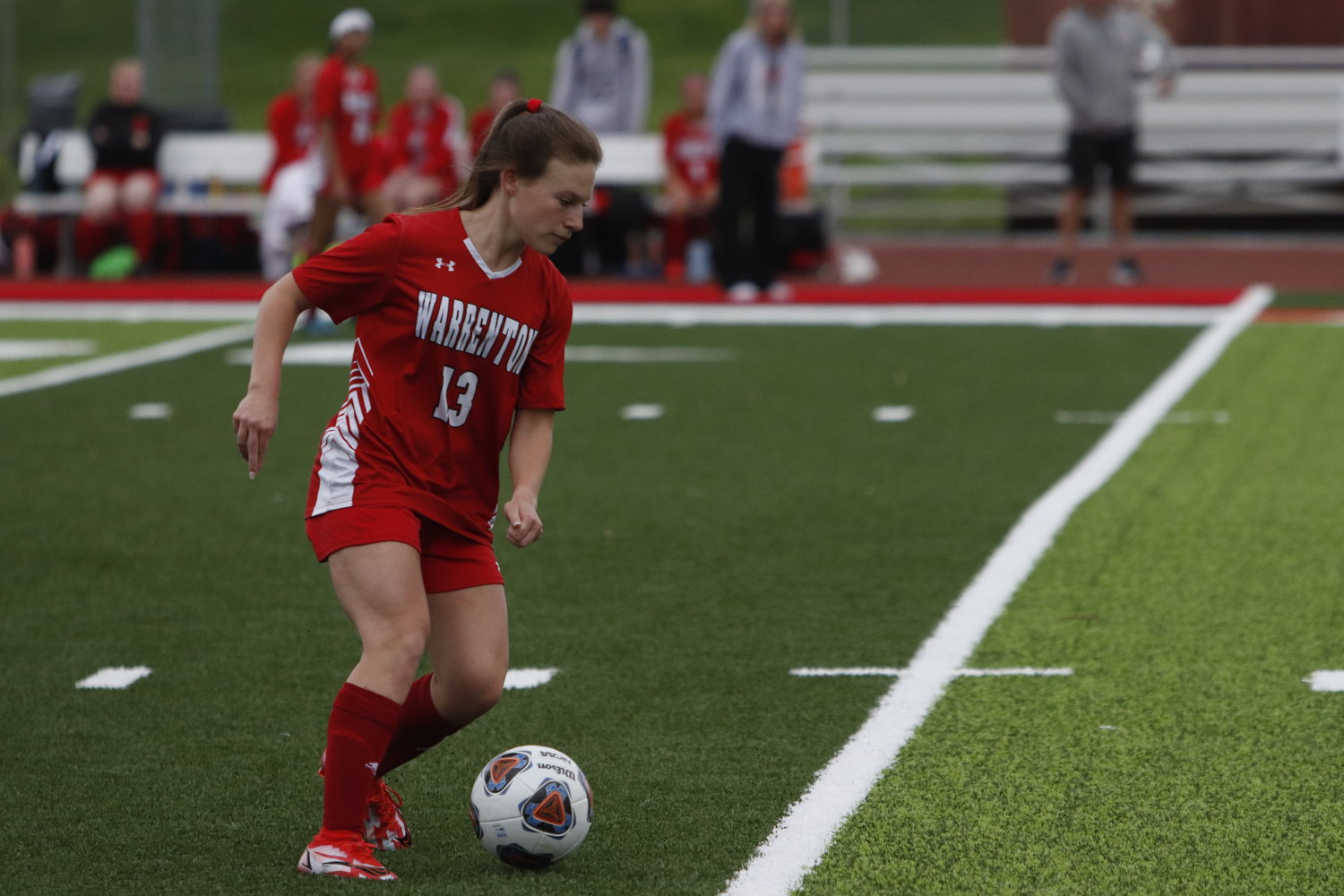 The Warrenton Lady Warriors used four first half goals to beat rival Wright City last week.
The Lady Warriors beat the Lady Wildcats 5-1. After a loss to Winfield one day earlier, Warrenton coach Amy Wargowsky liked her team’s performance against Wright City. She specifically cited the team’s communication in the game.
“Last night (May 3) was not a good showing,” Wargowsky said after last week’s Wright City game. “So I chewed them out after last night and I said you guys know how to play soccer. Show me. And so they did.”
Warrenton led 4-0 at halftime.The Lady Warriors were paced by Morgan Marschel’s two goals in the first half. Kylie Overkamp and Princess Collum also scored goals in the first half.
“We had our chances,” Wright City coach Devin Raney said. “The first 10 minutes of the first half, we were controlling the ball. We were getting chances. We had a mental breakdown here in the corner... Just a breakdown in play. And they get one and then then we’re trying to right a ship that’s off course.”
Wargowsky believes the strong first half and the win can be a confidence booster for the Lady Warriors.
Warrenton and Wright City each scored one goal in the second half. Wright City trimmed the Warrenton lead to three on Paige Kirn’s goal with 26:45 left. Bella Roberts scored for Warrenton in the 37th minute to extend the Warrenton lead back to four goals.
Raney’s message to the team at halftime facing a 4-0 deficit was to chip away and approach the second half trying to score one goal at a time.
“I told them you know you get to decide if this game’s done,” Raney said. “That was kind of the message was we have a half left to play. They scored four in a half. We can score four in a half. We have scored more than four in a half. There’s no reason why we couldn’t and we get to decide. And we came out and we possessed and had some chances.”
Wargowsky believes beating a rival school in Warren County added extra meaning to the game. The players wanted the game to be rescheduled after it was canceled earlier in that week.
“We weren’t going to reschedule it because we have our senior awards night tonight so we weren’t going to play it,” Wargowski said. “So we were like how early can we go. And all the girls were so mad. They’re like we have to play them. We have to...It’s a big deal to them now because it’s like a Warren County thing.”
Raney believes the physicality he saw from both teams had a rivalry game piece to it. He does not believe the Lady Wildcats otherwise played the game differently than they would have if they were not playing Warrenton.
“They all know each other and so I think to that effect, they want to win,” Raney said. “And at the end of the day, I think nothing that they would have done differently. I think a lot of them did really good stuff especially that second half. It was just a game that everybody’s heart was in. They wanted to win and we didn’t execute when we needed to. I think the physicality though was definitely it was a little chippy there for a little bit on both ends.”
The Lady Warriors split games against Sullivan and Moberly last week. Warrenton beat Moberly 4-1. Camryn Petersmeyer led the Lady Warrior offensive attack with two goals. Warrenton lost to Sullivan 7-1.
Warrenton was scheduled to square off against Union High School Tuesday. They were scheduled to play against North Point High School yesterday.
Wright City lost 5-0 to North Point Monday. Wright City was scheduled to play a game against Moberly Tuesday. They are slated to conclude their regular season against Sullivan today.
Both teams will begin district tournament play Saturday. Warrenton will compete in Class 3, District 4. Wright City will compete in Class 2, District 5.