At the end of each FFA year, members look forward to banquets across the state. Members can connect with other members, listen to leaders in the organization, and be awarded for their hard work … 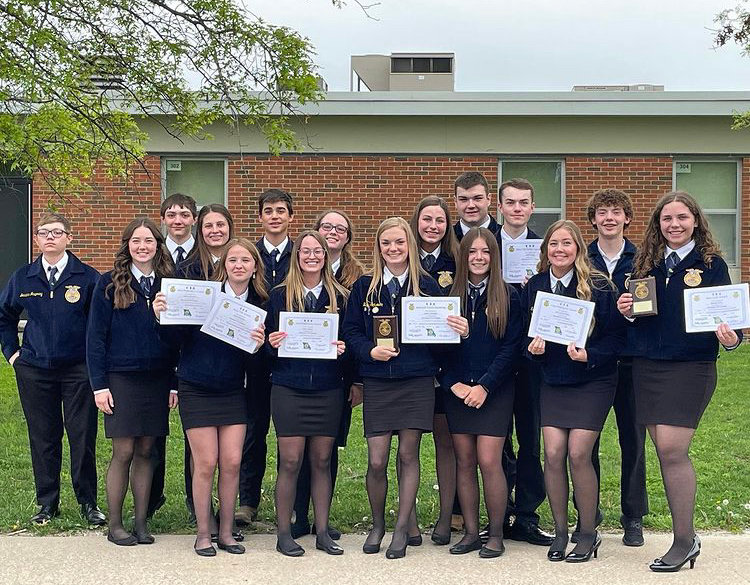 At the end of each FFA year, members look forward to banquets across the state. Members can connect with other members, listen to leaders in the organization, and be awarded for their hard work throughout the year. The banquets recognize every member for all of the accomplishments they achieved. This year, on May 4, the Area V Banquet was held at Elsberry High School.

It was a very exciting night for the chapter. Members enjoyed a meal catered by the Elsberry FFA Chapter and had the chance to see and make friends with members of other chapters. They listened to the Area V Officer Team perform the opening ceremonies, then the awards began. The first awards to be given out were the Proficiency awards. Proficiency awards recognize members for creating an efficient and successful supervised agricultural experience (SAE).

Warrenton FFA had three members recognized for this award area. Seth Rugh was awarded first place in the Outdoor Recreation Placement for working at Gateway Rifle Club for several years. Next, Nathan Benne got second place in Landscape Management Placement after being employed at Dry Fork Lawn Care during his high school career. And finally, Bailey Schneider was awarded third place for Vegetable Production Entrepreneurship for her sweet corn operation that she runs throughout the summer.

Following the Fall Speaking awards, the Leadership Development Events awards, or LDEs, were given out. LDEs are events that are designed to help members increase their leadership skills through speaking contests and record book awards. Maddie Dent was given first place in the Completed Placement Record Book, an award that is given out for how many hours one has earned while working at an agricultural business. Bailey Schneider placed first in Division 2 Prepared Public Speaking.

Finally, the most exciting part of the night arrived. This was the installation of the new Area V Officer Team. Warrenton FFA is proud to announce that member Kelsey Miller was chosen to hold an officer position. Miller was selected to serve as the Area V Second Vice President.