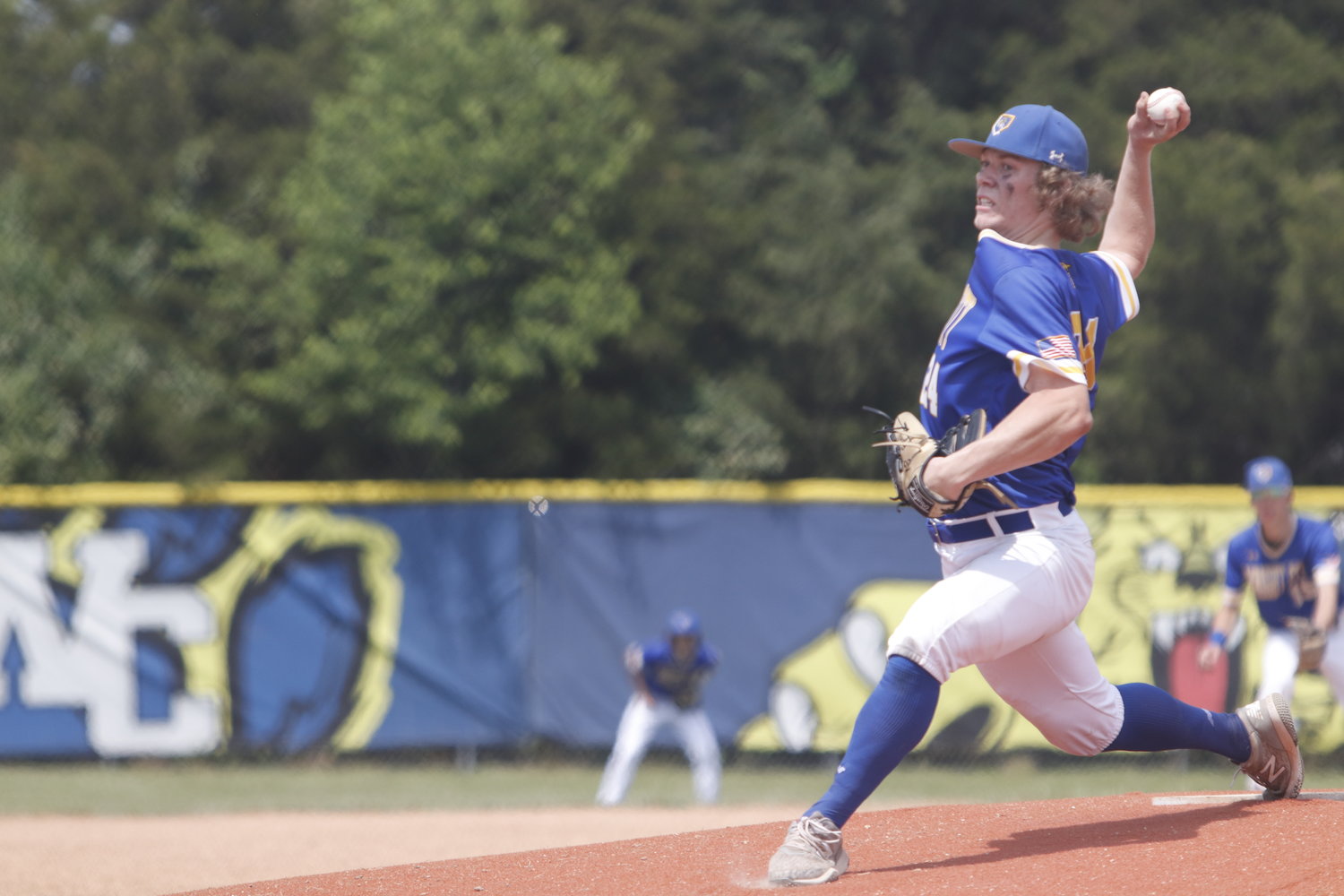 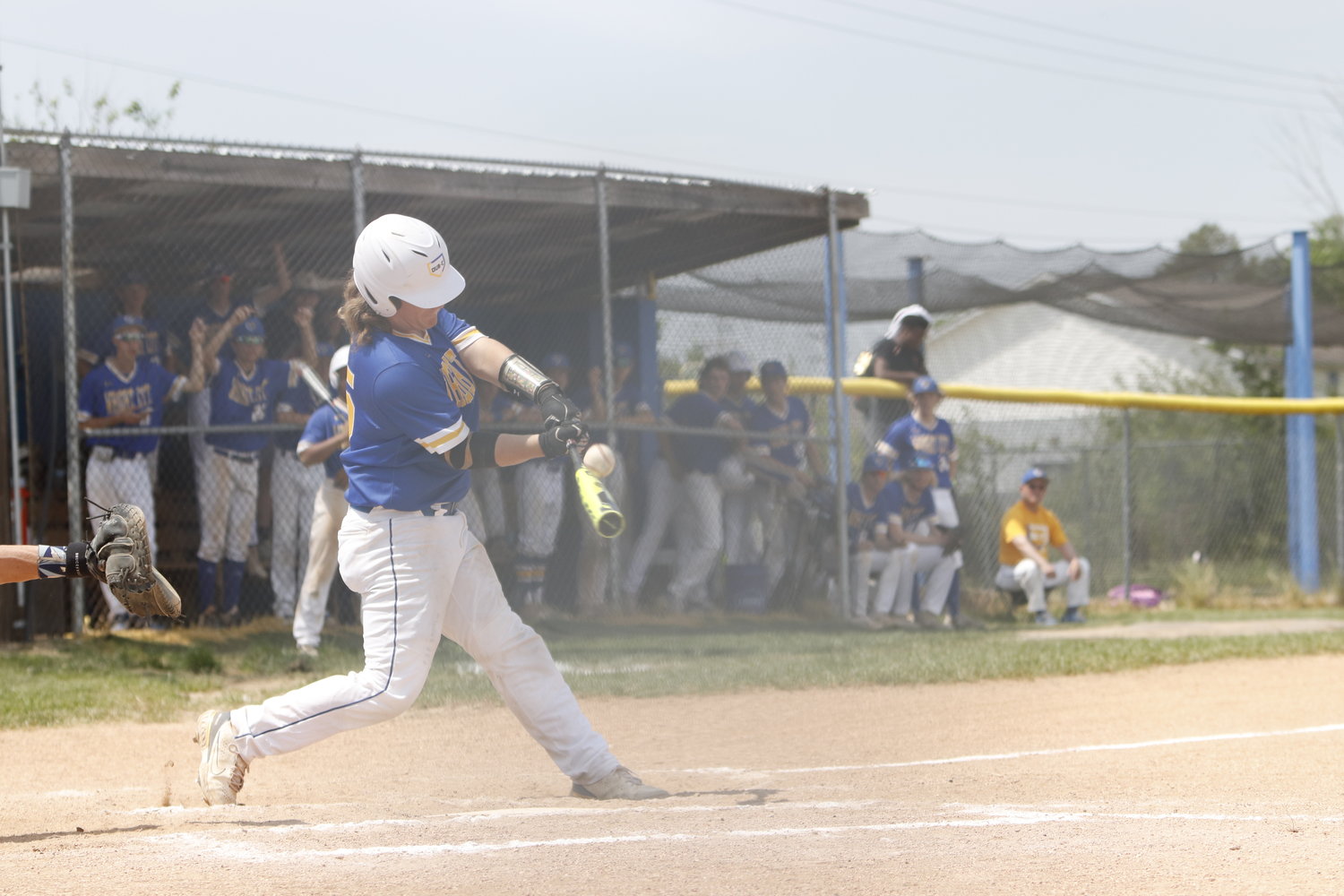 Nick Moore scored from second base on a sacrifice bunt with Wright City down to their last out and Hayden Waters hit a walkoff single in extra innings to propel Wright City to the district semifinal round.
Wright City beat conference foe Bowling Green 7-6 in eight innings Friday to advance to the Class 4, District 6 semifinals. Waters hit a single to left field with no outs and the bases loaded in the eighth inning to clinch the win for the Wildcats.
“Knowing it was bases loaded, no outs, it was my goal just to get the ball, elevate it,” Waters said. “Get it up in the air and try to get that runner home. Regardless what the outcome was, just do my job and basically, the rest was history. We walked it off.”
Waters threw six-plus innings for Wright City. He gave up four runs, with only two runs being earned runs. After surrendering three runs in the first inning, Waters did not give up a run over the next five innings.
“I was thinking too much,” Waters said. “You know a big game, districts. And my goal was just to put it in the spots and get us in position. Keep us there and keep scoring and win this ballgame.”
After falling behind 3-0 after one inning, Wright City tied the game 3-3 after three innings. Waters hit a double in the third inning scoring two runs to tie the game.
The game remained tied until the bottom of the sixth inning, when Wright City scored two runs. Jake Orf reached base on a single with one out and scored when a pitch got past Bowling Green catcher Cooper Kiel. Duan McRoberts scored the second run of the inning on Waters’ infield single.
Bowling Green mounted a seventh inning comeback. After the leadoff batter reached base on an error, Waters was replaced on the mound by junior Chris Russell. Waters stayed in the game at center field. Zach Gibson doubled down the left field line and Cody Pogue was hit by a pitch to load the bases. Mason Kunkel entered the game as the third Wright City pitcher in the inning. After Kunkel walked Kiel with the bases loaded, Kunkel induced a double play to get outs at home and first base and move Wright City one out away from the win. With the score 5-4 and two outs in the inning, Owen Niemeyer hit a fly ball to short center field. The ball fell between Waters and infielders Ian Wolff and Logan McCartney. Two runs scored on the play. Kunkel retired DJ Feldman to limit the damage in the inning.
Trailing by one run and their season on the line, Nick Moore led off the bottom of the seventh inning with a single. Hayden Kendall popped out to first base for the first out of the inning. After Moore stole second base, he scored from second base on Orf’s sacrifice bunt. Wright City coach Ryan Raterman called the play for Moore to score on Orf’s sacrifice bunt.
“We called that. We like to be aggressive and that was the time,” Raterman said. “And when we have these big lopsided scores in the season, you’ll always hear me say I know you don’t want to do this but we have to work on something here. And I say it all the time. And we worked on it and it was insane. I’m sure somebody has a video of me. I was flying down the line. Because I was jacked. Because that was go home if we didn’t score.”
Trey Brakensiek threw a perfect eighth inning for Wright City to set up Wright City’s walkoff win later in the inning.
The win avenged Wright City’s loss to Bowling Green earlier in the season. The Wildcats lost 9-6 to Bowling Green in the regular season.
“It’s playoff baseball,” Raterman said. “Anything can happen. We gave them our best and they gave us theirs and it showed today that everything comes full circle. I think we gave them the game in conference and we had the chance to end their season and we did. And so it was a team win.”
With the win, Wright City advanced to the district semifinal against top-seeded Lutheran St. Charles. Raterman noted the importance of Waters going six innings in the game. The other three pitchers used in the game had low pitch counts, he noted.
“When you give us a start like that, it helps,” Raterman said. “Now we didn’t really throw that many pitches for the rest of the guys. Because he went so deep and we were able to piece things together. But we didn’t have to get into our bullpen early. We save arms for Monday.”