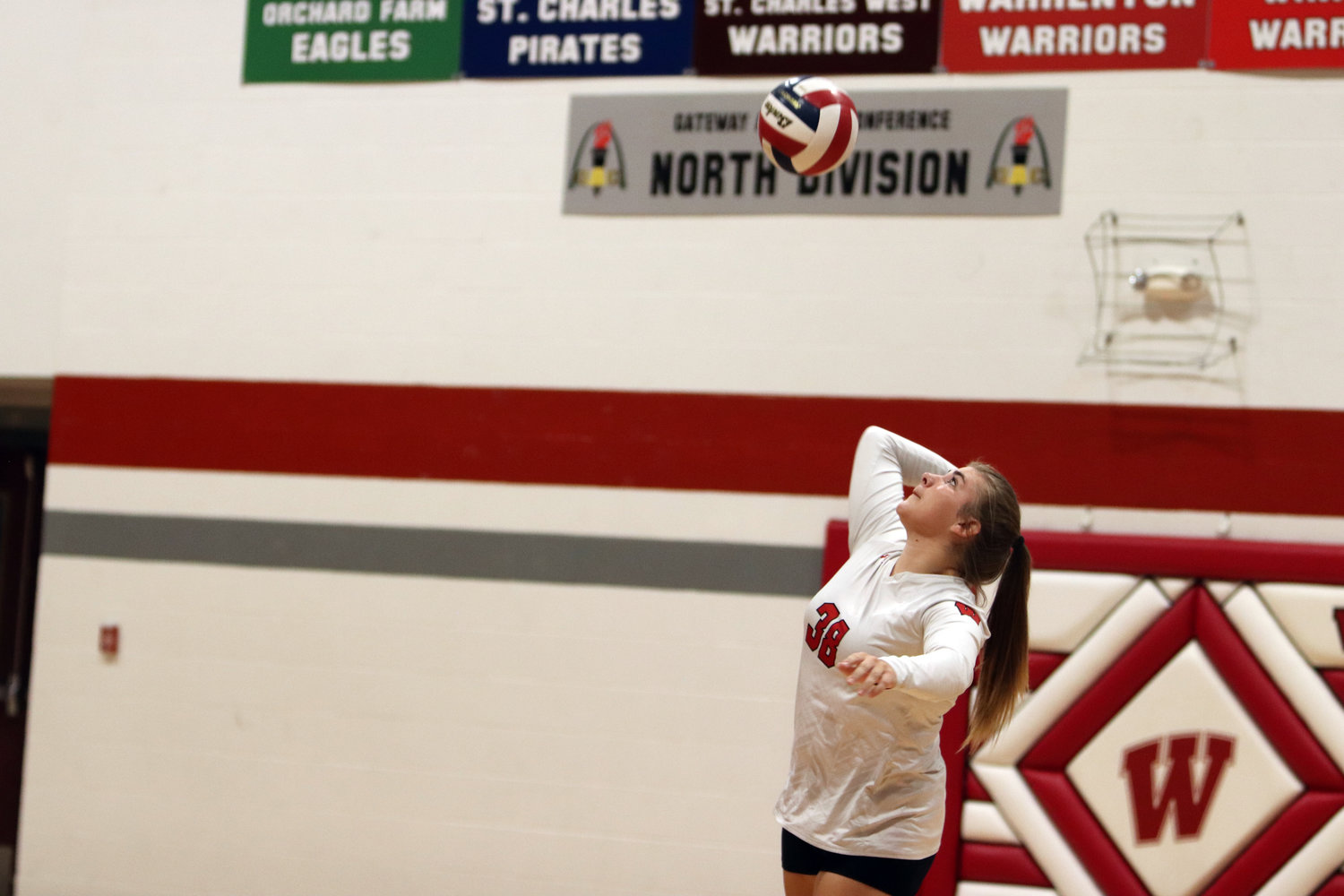 Warrenton used a balanced attack to win their third match of the season last week.
Warrenton (5-8) beat St. Charles West in three sets. The Lady Warriors won the sets 25-23, 25-13 and 25-22. Warrenton is now 3-1 in home matches this season.
“The second set we really put it all together,” Warrenton volleyball coach Randy Kindschuh said. “We hit well and we blocked well.”
After falling behind in the first set, the Lady Warriors won six consecutive points after a timeout to turn a 18-15 deficit into a 21-20 lead. Warrenton won two consecutive points with the set tied 23-23 to win the first set. The Lady Warriors jumped out to a 19-10 second set lead and won the set convincingly. Kindschuh said the hitters and setters were not in sync the first set but gained their traction later in the match.
“We run different plays,” Kindschuh said. “They might have been running a quicker set and then she was setting a longer one. And so then you saw a lot of this kind of stuff, off balance. And so by the second set, I think we were a little bit more on the same page offensively.”
The Lady Warriors received contributions from multiple players in the win. Kindschuh specifically cited Nicole Benne’s contributions in the win. Benne and Zoe Klaus finished tied for the team lead with six blocks. They each added seven kills.
Kindschuh thinks Benne’s performance against St. Charles West was her best game as a Warrior.
“If we can get that kind of production out of her, it’s going to take a little bit of pressure off our outsides,” Kindschuh said.
Rayne Van Reed led Warrenton with nine kills. Chandler Blondin, who made her first start two weeks ago, registered five kills. Emily Likes added four kills and finished with 32 assists. Kaelyn Meyer had four kills and three blocks.
Kindschuh said the Lady Warriors are making strides this season. Warrenton lost five starters from last year’s team. He is looking for consistency as the season progresses.
“We’re like a roller coaster. We’ll play some really good sets and then all of the sudden, the doors blow off. We’re not very consistent right now so we’re looking for consistency,” Kindschuh said.
The Lady Warriors went 2-3 at the Cuba Lady Wildcat volleyball tournament last weekend. They beat both Viburnum and St. James 2-0. They lost to Potosi, Union and Steelville. They lost to Steelville in three sets. The other two losses were in two sets.
Zoe Klaus finished tied for the team lead in both blocks and aces at the tournament. Klaus and Emily Likes finished with four blocks. Klaus and Kaleyn Meyer finished with five aces. Rayne Van Reed led the Lady Warrior offensive attack with 23 kills. Klaus and Meyer also finished in double digits in kills. Klaus finished with 14 kills. Meyer added 10 kills. Likes led Warrenton with 75 assists.
Warrenton lost to St. Charles Tuesday.