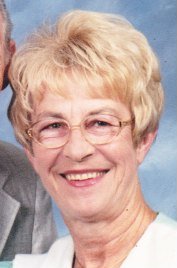 Erika Dwyer was welcomed into her eternal home by her Lord and Savior on August 1, 2022. She had longed for this for quite some time, as her earthly body was wearing out and she greatly missed her husband of 50 years, Jerry Dwyer. The desire of her heart was to hear Jesus say to her "Well done, good and faithful servant."

The youngest of six, Erika was born to Karl and Wilma Nolte in Dusseldorf, Germany, on July 10, 1941. Born during the middle of WWII, life was difficult for her family, but she has fond memories of her older sister who always looked out for her.

Erika and Jerry met in her hometown of Marktheidenfeld, Germany, when Jerry was serving in the Air Force. They were first introduced when Jerry asked Erika's mother, who was a cook at the military base, to bake a birthday cake for him. She invited him to her home for cake, and it was there he met Erika. They married on December 23, 1960. Erika and Jerry returned to Missouri upon the completion of his military commitment in 1962, bringing home their first child, Cindy. Erika was employed with Western Printing Company in Hannibal, MO, for her first 10 years in the U.S.

She loved her family fiercely and adored her 10 grandchildren, spending as much time as possible with them. She always made time for family and friends. Erika had a true servant's heart. She taught the 4-year-old class at Calvary Baptist Church for many years, helped Jerry with the bus ministry, and was committed to meet weekly to prepare shoeboxes for Operation Christmas Child, a ministry of Samaritan's Purse. She also spent many years visiting residents of various nursing homes to bring them joy. Erika was a very hard worker and could be found right by Jerry's side helping him with the many houses he built for them. She enjoyed making quilts and afghans for family members and loved going to her ceramics class.

Her last year and a half was spent at Harton Senior Living in Warrenton where she made many friends and enjoyed playing cards and bingo. Erika was a very social person and will be dearly missed by everyone who knew and loved her.

Visitation will be held from 9 to 10:30 a.m. Friday, Aug. 5, at the James O’Donnell Funeral Home in Hannibal, MO. Graveside services will follow at 11 a.m. at Grand View Burial Park in Hannibal.  A celebration of Erika’s life will be held at a later date, also in Hannibal.

Memorial contributions may be made to Samaritan's Purse. Online condolences may be shared and video tributes may be viewed at www.JamesODonnellFuneralHome.com.