The Warrenton football team had eight players earn all-conference accolades, including three who were recognized for their efforts on both the offensive and defensive sides of the ball. The Warriors … 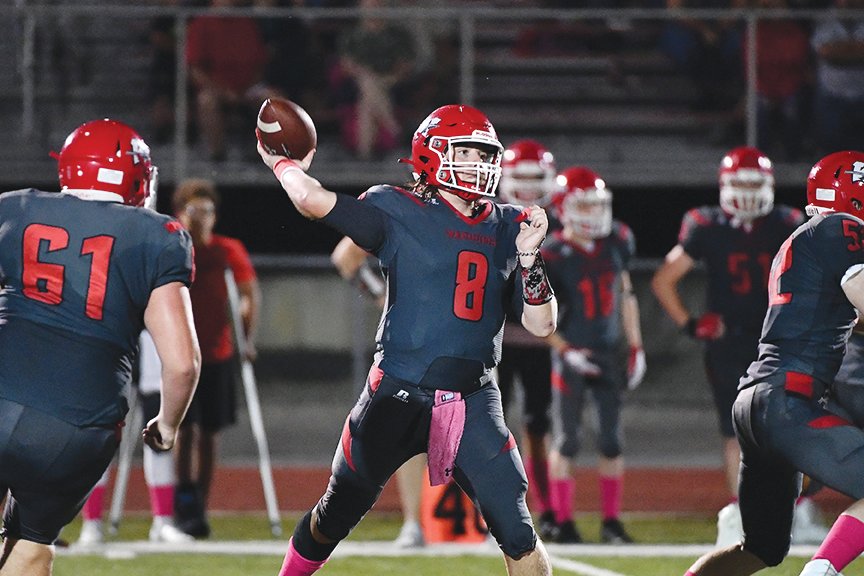 The Warrenton football team had eight players earn all-conference accolades, including three who were recognized for their efforts on both the offensive and defensive sides of the ball. The Warriors finished the season 3-7, going 2-2 for a second-place finish in the GAC North.

Senior Kolby Meine received a first-team selection for his contributions at wide receiver. Meine finished the season with 36 receptions for 462 yards, scoring nine touchdowns. He earned a second-team nod at defensive back, having recorded 35 total tackles.

“As a whole this year, he was very sure handed,” said Coach Jason Koper. “I felt like every time we were going to throw him the ball, he was going to have a great chance of making a play. He had some stats that don't even show up on the box score.

“He was a very solid corner,” continued Koper. “He usually got matched up against the better receivers and did a very solid job at corner. Over four years of development he really turned out to be a pretty good tackler.”

Senior Caelon Weir was selected as a first-team defensive back, after finishing second on the team with 54 total tackles and an interception.

“Caelon forced multiple fumbles this year and was almost always in the right spot defensively,” said Koper. “He probably turned out to be our most overall consistent defensive player.”

He was also chosen as the second-team quarterback, having completed 111 of 233 passes for a league-best 1,701 yards, throwing 21 touchdowns to 16 interceptions.

“That was tough stat- wise, because he didn’t have as many touchdown passes as Winfield’s quarterback,” said Koper. “I thought Caelon was definitely a first team caliber quarterback. He definitely had a good year considering all of our injuries.”

Senior T.J. Ray was an anchor on both sides of the line, claiming a spot on the first team as an offensive lineman.

“I think the game that summed up T.J. was how he played against Moberly,” said Koper. “If we needed a yard it was going to go right behind him.”

He was also a wall for the Warriors’ defense, resulting in a second-team selection after 45 tackles, a fumble recovery and a sack.

“He was the rock in the middle for us at defensive lineman,” said Koper. “When he was out, it impacted our entire defense. He’s big and physical and a gap eater, everything you want from a lineman.”

Senior Issiah Jones was named to the second team as a running back, despite missing several games due to injury. He still managed to finish with 592 rushing yards and four touchdowns on 112 carries.

“Issiah ended up getting the bulk of the carries,” said Koper. “He got a lot of very much deserved reps and had a monster game against Moberly.”

Senior Joe Evans was rewarded a second-team spot at wide receiver, after leading the Warriors with 544 yards and two touchdowns on 35 catches this season.

“He was a big-play guy, who made a lot of big catches this year,” said Koper. “For a while it seemed like he didn’t have a reception under 30 yards. He was definitely a big play threat and other coaches worried about his athleticism and rightfully so.”

Sophomore Joe Goldsmith was chosen for the second team as an outside linebacker, despite having his season shortened by an injury. Through four games he recorded 34 tackles, adding a fumble recovery and sack.

“He was a force on defense and a great outside linebacker,” said Koper. “His athleticism out there made a huge impact for us.”

Freshman Carter Tittel made an immediate impact during his first year, claiming a second-team spot as middle linebacker. He finished with a team-best 61 tackles, with one fumble recovery and a sack.

“He stepped up big and missed a little time too, which skewed his stats down a little bit,” said Koper. “He did a great job as a freshman playing a lot, especially against those physical downhill running teams.”

Junior Colton Brosenne was named to the second team as a punter, following a season in which he booted the ball 27 times for 982 yards, resulting in an average of 37 yards per punt.

“He barely missed making the first team,” said Koper. “There at the end we mixed our special teams up due to illness. He’s spent a ton of time practicing his skill and has done a nice job punting.”