Caelyn Hanff had never before done a sport prior to receiving a flier from her seventh-grade physical education teacher about a new wrestling program that was burgeoning in Wright City. 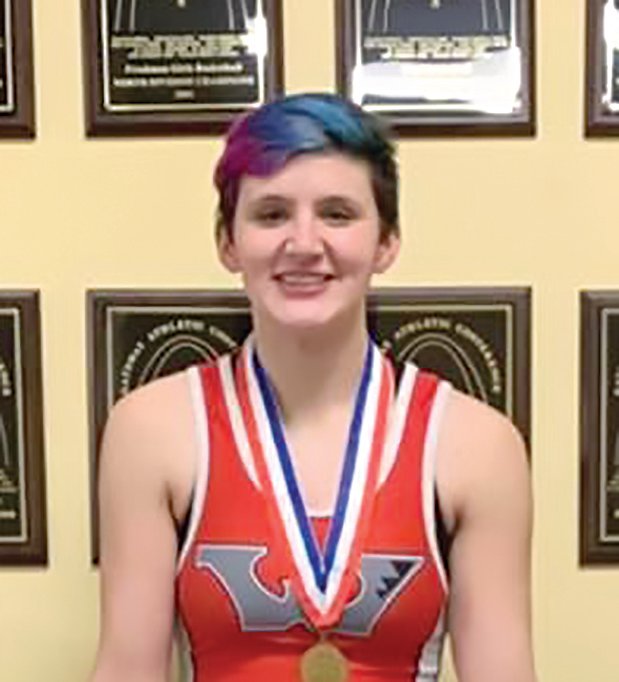 Caelyn Hanff had never before done a sport prior to receiving a flier from her seventh-grade physical education teacher about a new wrestling program that was burgeoning in Wright City.

Intrigued, she decided to pursue the invite and has not looked back since. Now she is looking down from the top of the podium, having climbed her way to the top of the rankings.

Having since transferred to Warrenton, the WHS freshman recently claimed the program’s first-ever girls GAC Championship, defeating three opponents along the way.

“My first match my opponent got me in a tough spot where she got me to the mat and almost pinned me, but I worked out of that and pinned her,” Hanff said.

Wrestling at 149 pounds, Hanff now has her sights set on districts, in hopes of earning a trip to the MSHSAA State Championships in February.

Hanff has participated in color guard in the past and is also planning to join the archery club.

Q: What drew you into the sport?
“It was something I’ve never thought about and one of the sports that not many people do, and seemed like something I could try.”

Q: What about it kept you engaged?
“In 2020 I had won state in my second year of wrestling. That really got me motivated and now I want to take it somewhere in high school.”

Q: What is your favorite move?
“The cradle.”

Q: What's your prematch ritual?
“I do a little hop punch. I’ll jump around and punch our managers’ hands. It gets me really energetic and hyped.”

Q: How have you seen the sport grow since getting involved?
“Now there’s a lot more girls tournaments and fair rules for girls. Now in high school girls don’t have to wrestle boys, so we don’t have to worry about the testosterone difference of guys over girls.”

Q: What have been other highlights of your season?
“I’ve gotten a lot of wins this year compared to other years. All the girls tournaments I’ve gone to have been pretty successful.”

Q: What do you hope to accomplish?
I don’t really want to go to college, but it’d be nice to get a college scholarship. I just want to make it to state and hopefully place eventually.”

Q: What would you like to see happen with girls wrestling?
“I think it’d be cool to see girls and boys wrestling to be equal, to where the numbers are more even. I don’t want the sport to have a gender.”

Q: Why are girls becoming more interested in the sport?
“Part of the reason is a lot of girls are scared to join or they don’t want to be the first, so I think as they see other girls succeed it draws others in.”

Q: What subject do you enjoy learning about?
“I really like art that involves bones and specimens.”

Q: Who has had the greatest influence on your life?
“My parents have pushed me and supported me a lot.”

Q: Where would you like to travel to?
“I’ve always wanted to go to a really big city in California where it’s warm.”