Caelyn Hanff, Kali Jensen and Elizabeth Riggs all placed first in their … 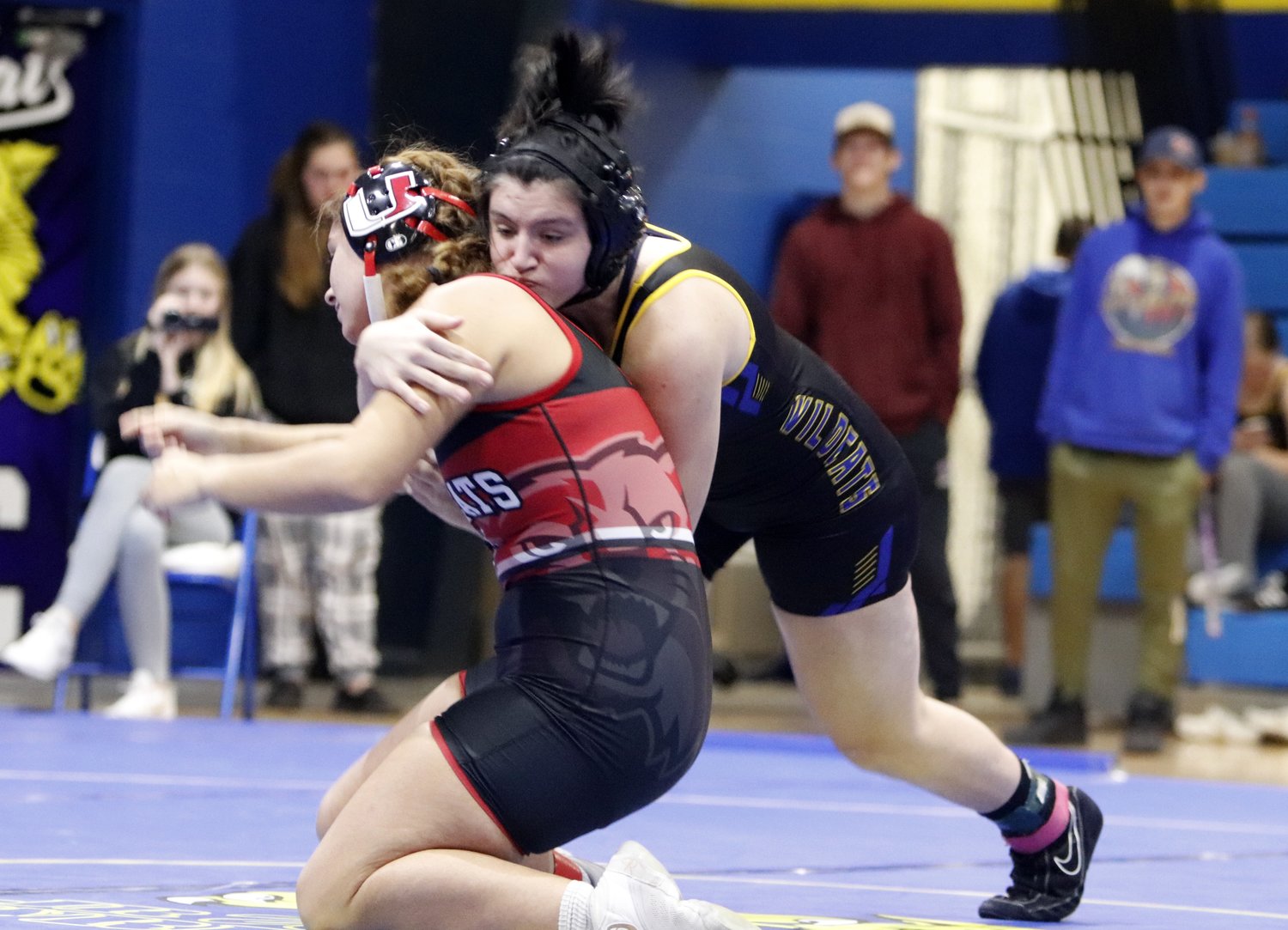 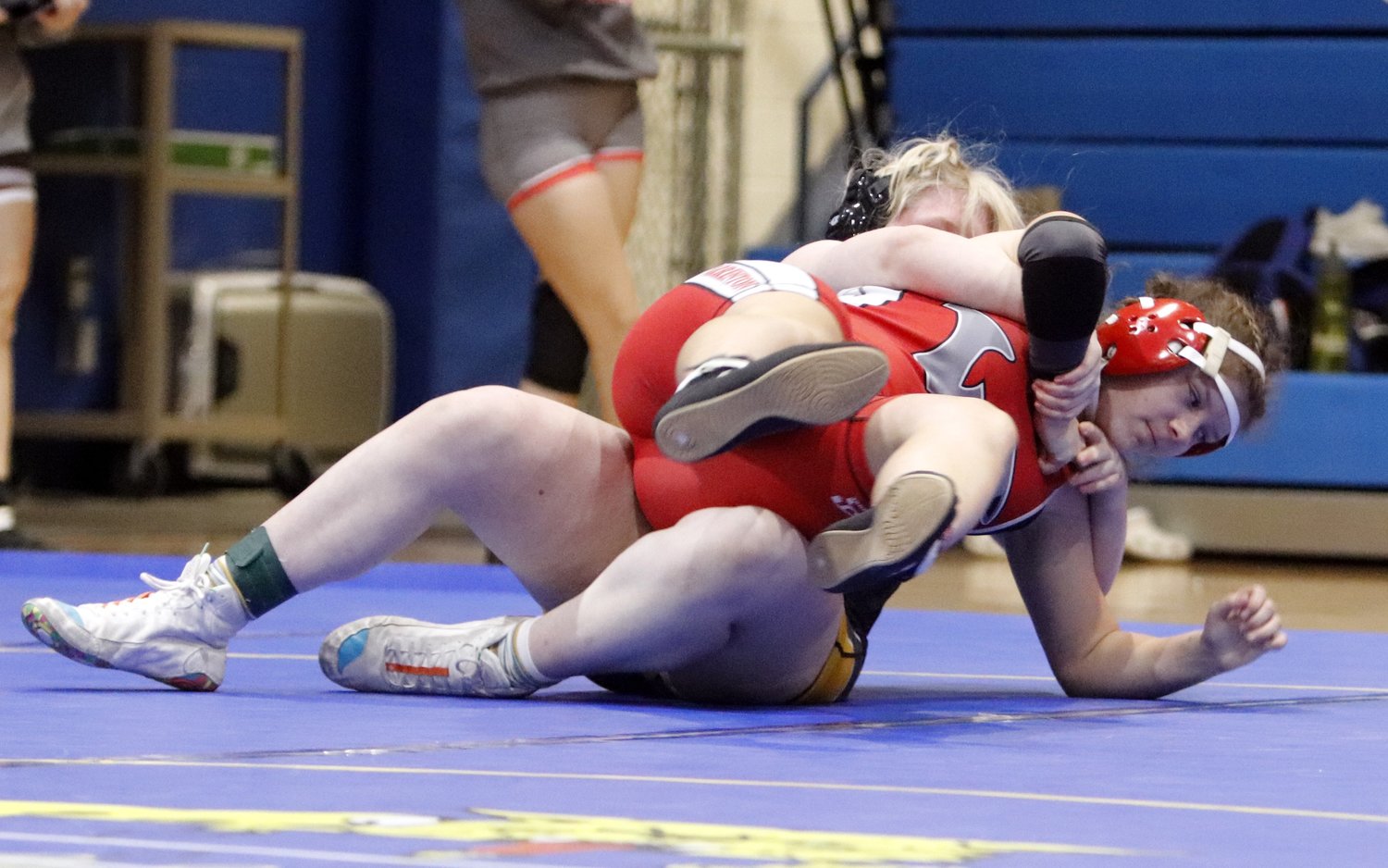 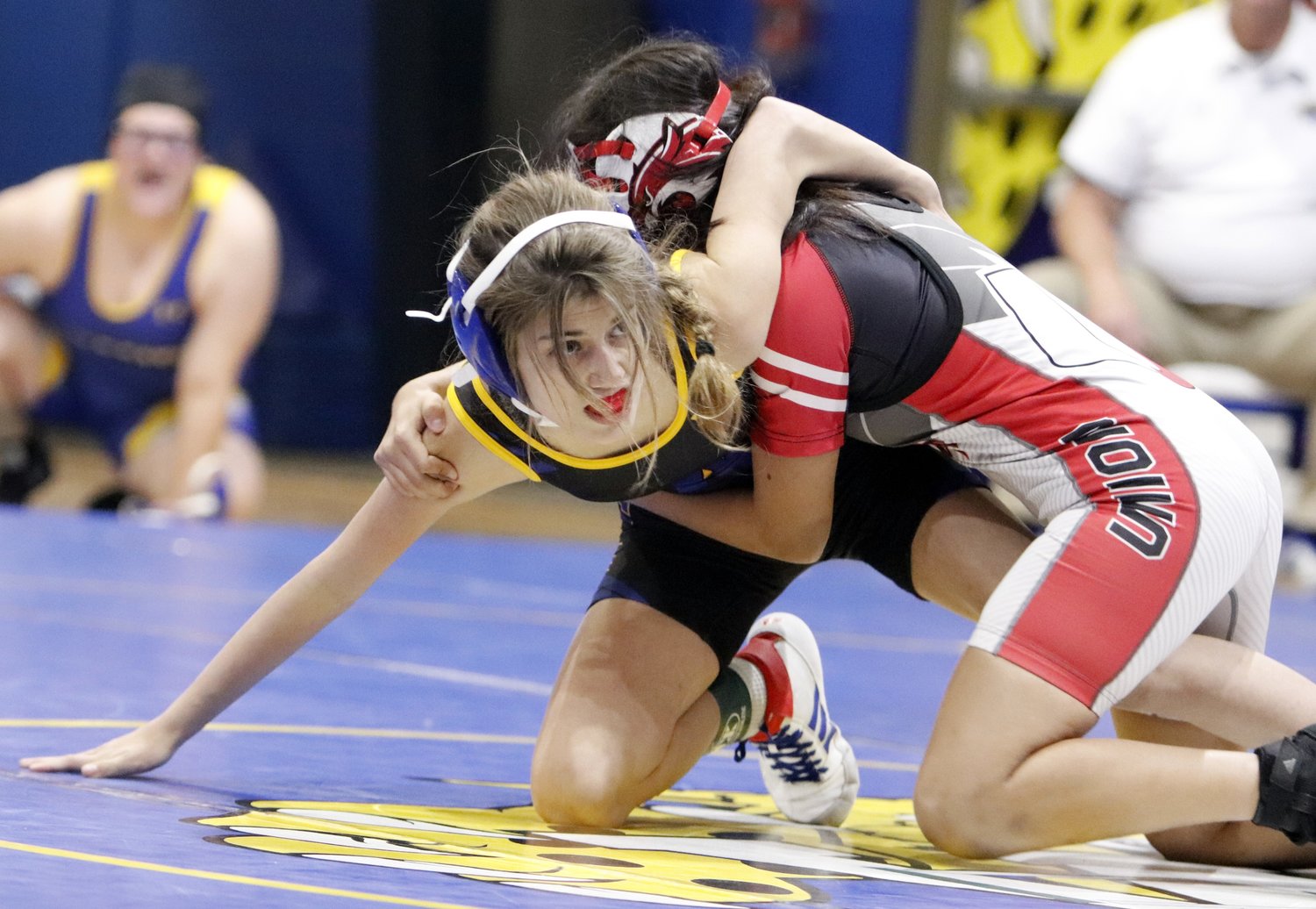 Caelyn Hanff, Kali Jensen and Elizabeth Riggs all placed first in their weight class. Hanff and Riggs were state qualifiers last season. Jensen is a freshman and in her first year of high school wrestling.

A sophomore transfer from Warrenton, Hanff went 5-0 on the day in the 170-pound weight class. Hanff recorded pins in all five wins, all of which came in under three minutes. She pinned Kloie Parks of Sullivan in 1:59 in the semifinal match. She pinned Gianna Schreck of Union in 1:32 to win the weight class.

Jensen won all three of her matches by fall in the 120-pound weight class. Jensen beat Elsie Martin of Clayton and teammate Hailey Henson by pins in 2:52. She also beat Alexzandra Walotka of Mexico. She pinned Walotka in 21 seconds.

Riggs pinned all three opponents in a combined 1:23 to win the 125-pound weight class. Riggs pinned Emileigh Woods and Kiya Smith, both of Mexico, in 13 seconds and 21 seconds. She pinned Riah Wigfall of Hannibal in 49 seconds.

“My better kids won and did well,” Wright City wrestling coach Fred Ross said. “Caelyn Hanff did well. Kali Jensen did well and so did Liz Riggs. I expected those three to do really well. We had seven other girls win a match today. So pretty pleased about that.”

Four other Lady Wildcat wrestlers won multiple matches on the day. Ella Greenwell Washburn went 3-2 on the day and placed third in the 235-pound weight class. She pinned Lillian Dearduff of Winfield, Kenzy Mattingly of Sullivan and teammate Macy Ulloa. She fell to Reya Bristow of Sullivan and Alexus Johns of Mexico. Lillian Heppermann went 2-2 on the day in the 135-pound weight class for Wright City. She placed third out of five wrestlers in the weight class. She beat Carly Stuart of Mexico on a 4-3 decision and Sadie Altimas of Sullivan on a pin. She lost to Aine Callahan of St. Francis Borgia and Zoe Fisher of Pacific on pins.

Lauren Ritter went 2-3 on the day to place fourth out of six wrestlers in the 155-pound weight class. She beat Hannah Sumner of Sullivan and Ashley Wright of Union on pins. She fell to Breanne Gibbs of Moberly, Dani Gullet of Pacific and Maria Schatzl of Sullivan.

Chloe Richardson won a pair of matches in the 130-pound weight class. Richardson beat Josephine Nichols of Clayton and Malika Sturm of Hannibal.

“We really did well,” Ross said. “I was pleased with the way everybody battled. They were trying stuff we’re working in the room. As a head coach and with young wrestlers, that’s all you can ask for.”

Two Warrenton wrestlers competed at the tournament this past weekend. Madisen Nash went 3-2 on the day and placed third in the 145-pound weight class. Nash beat Katie Summers of Sullivan and Lauren Karch of St. Francis Borgia, both on 5-0 decisions. She beat Kailin Hawn of Wright City on a 2-0 decision. She dropped matches to Gracie Straatman of Union and Ella Woodside Pursch of Union. She lost to Woodside Pursch on a 5-4 decision.

“Madisen’s first year wrestling was last year,” Warrenton wrestling coach Clayton Olsson said. “And she only had I think three or four wins all of last year. And she got three wins just this tournament. So the improvement there is great. Took third place in the first tournament. So I’m really proud of the way she wrestled.”

Freshman Allison Vacek won a match in the 170-pound weight class for the Lady Warriors in her first wrestling competition in her high school career. She beat Persepho Morrison after Morrison got injured at the 3:15 mark. Vacek was leading the match 10-7 at the time of the injury.

“She’s only been wrestling for three weeks and she’s at a varsity wrestling tournament,” Olsson said. “She came away with her first varsity win this tournament and she got a lot of good experience. She battled through injury so I’m very happy with the way they did.”

Overall, Olsson liked Nash and Vacek’s conditioning level during the first tournament of the year. He thought the Warrior wrestlers were in better shape than their opponents throughout the day.

“In all of our matches, it looked like we were in better shape than our opponents,” Olsson said. “They were getting tired and we still had some energy left. So that’s always good to see. Especially with inexperience like Allison where she just doesn’t know a lot yet. Being in better shape can sometimes win those matches for you.”

Ross added he is happy with where the Lady Wildcat wrestlers are at after their season opening tournament.

“We’re at a point where we’re trying moves. We just don’t quite get them all the way yet,” Ross said. “So that’s really good. So we’re remembering some stuff but not remembering the other stuff. We’re excited about that and we’ll just start doing some fine tuning. We’re going to get some kids a little bit farther and hopefully improve next week. “

The Warrenton boys wrestling team was scheduled to open their season with home matchups against Hannibal and Helias. The triangular is scheduled to begin at 5 p.m. Nov. 30 at Warrenton High School. The Warrenton girls wrestlers are scheduled to compete at the Ft. Zumwalt North Invite Dec. 2 and Dec. 3.