The Wright City Lady Wildcat soccer team persevered through injuries and a tough schedule to win 10 games for the first time in the program’s short history. Wright City (10-11) had two separate … 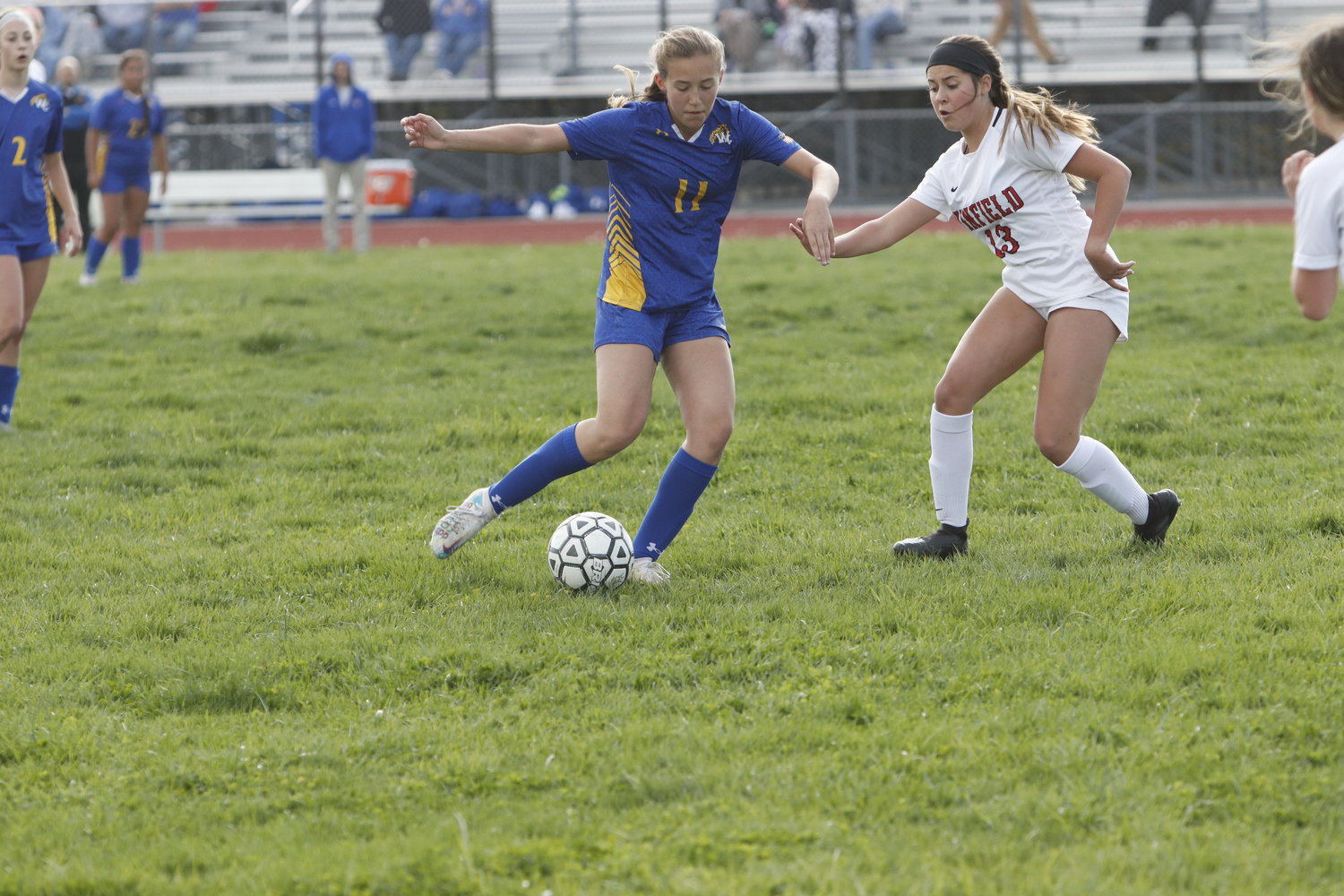 Paige Rees (left) looks to get past Winfield defender Jessi Rudar during a game earlier this season.
John Rohlf photo 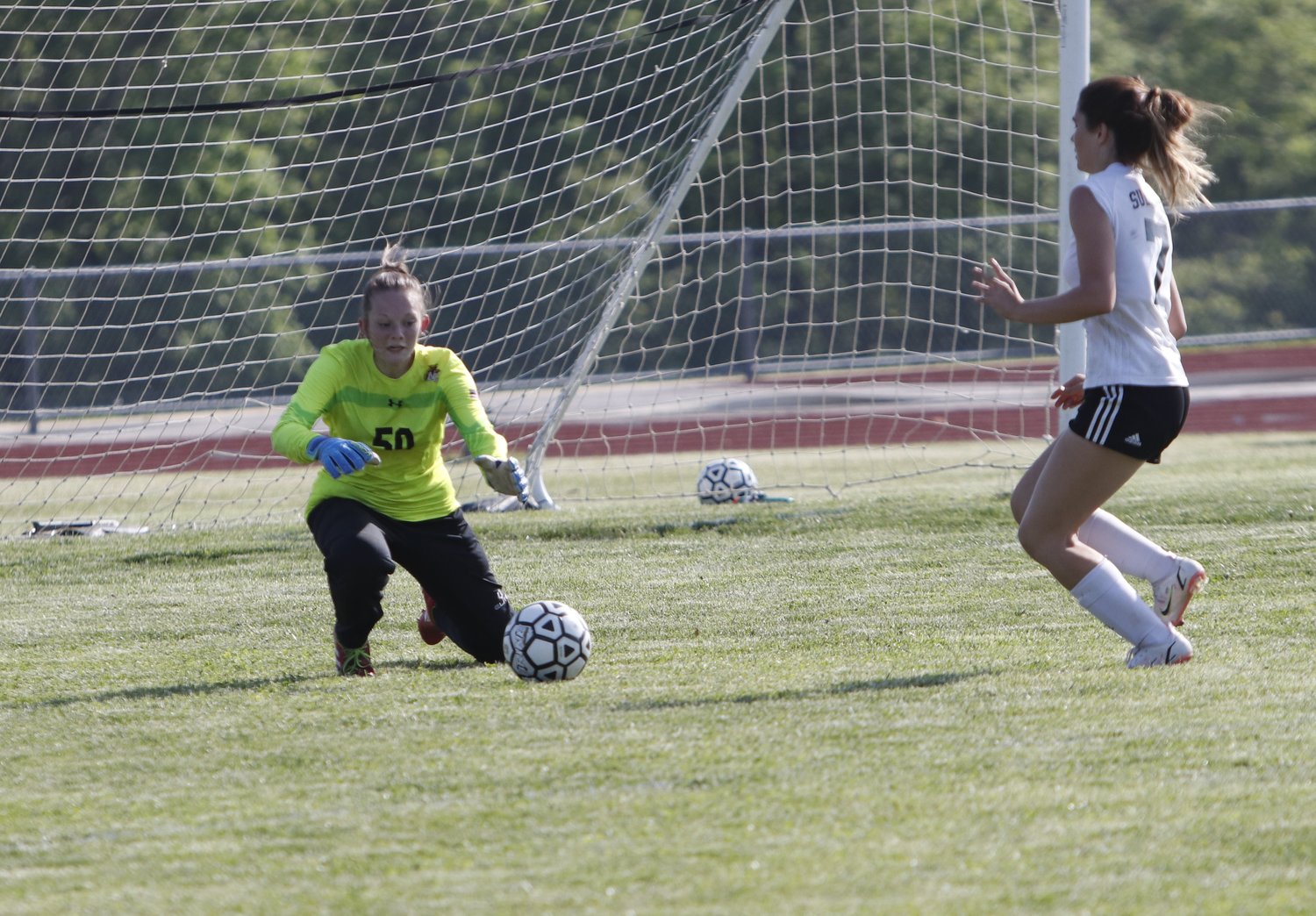 The Wright City Lady Wildcat soccer team persevered through injuries and a tough schedule to win 10 games for the first time in the program’s short history.
Wright City (10-11) had two separate three game winning streaks in April to start the season with nine wins in their first 10 games. They battled through injuries and a daunting schedule the second half of the season. Wright City soccer coach Devin Raney was proud of how the team dealt with adversity throughout the season. The adversity included players dealing with injuries and the team losing players at different times in the season.
“The girls kept battling even though we weren’t getting the outcome that we were looking for,” Raney said. “They showed up every day and battled. So I was just proud of how they dealt with the adversity and trying to come and compete every day.”
The team’s strength of schedule was the most difficult in Raney’s tenure as the Lady Wildcats coach, he said. Raney started coaching the team in the 2019 season. They also lost key players at different times in the season. He specifically cited losing senior Hannah Kendall in the regular season finale against Sullivan. Kendall was not able to play in the first round of the district tournament against St. Charles West. Wright City lost the game 7-0.
“You say, well, it’s one player,” Raney said. “But someone has to fill that spot which then moves another player around from the backfield or the midfield. And so you have all this kind of adjustments that go. So losing a player like that right before districts is a hard one.”
Raney stressed he believes more players this year were prepared to go through the struggles of the season. They outlined in team and captain meetings how difficult the second half of the schedule was going to be this season.
“We faced the most I think ups and downs this season. But we were also the most prepared for it,” Raney said.
Wright City achieved five team goals they set at the beginning of the season, Raney said. They scored 40 goals, had double digit wins, had three shutouts and achieved the team GPA goal.
The Lady Wildcats started four sophomores and three freshmen this season. Freshmen Paige Kirn and Paige Rees both started at midfield for the Lady Wildcats. They were basically controlling the game, Raney said. He noted they were going against players that were four years older who have played the game much longer and have more size and strength. There is a lot of development that takes place at the varsity level, Raney stressed.
“I think as they progressed through the year, they learned how to adjust to find success when you’re playing against someone that by all metrics is a better player than you as far as size, speed, physicality. All that stuff. So they really found a way to adjust,” Raney said. ”
Raney stressed the impact the outgoing seniors had on the program. The seniors helped develop the program to where it is today.
“You’ve got girls who went from kind of not knowing what high school varsity sports were like to now they’re running the show and kind of coaching the other girls through,” Raney said.
Raney confirmed he will not coach the team next season. He is moving into an administrative role at Wright City High School. Raney coached the team to a 22-27 record in three seasons at the helm of the program. A fourth season was canceled due to COVID-19.
Raney believes the team is in a bright spot for the future for the next coaching staff. Raney referenced the seven underclassmen starters set to return to the team. He also noted Alex Sutter and goalie Cassandra Reash will be seniors on the team next year. Sutter and Reash are only getting better, Raney said.
“I see at least for the next four years they’re going to be pretty set as far as being able to find success on the field,” Raney said.