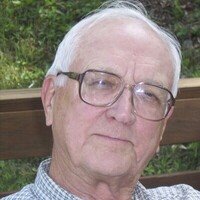 Harry frequently reminisced fondly about his childhood in Biehle, MO, later moving to Perryville, then St. Louis. Upon graduation from South Side Catholic High, Harry joined the US Army. After WWII, Harry received his degree from St. Louis University. His career with Crown Zellerbach Corporation took him from St. Louis to Chicago to Houston. After retirement, Harry moved to Innsbrook, Missouri, which quickly became his favorite place on earth. Harry was an active member of Holy Rosary Catholic Parish, heading the parish ACA campaign for many years. Harry was happiest when he was busy, and especially enjoyed handball and golf well into his 80's. He counted his “poker group” among his dearest friends.

At Mr. Wappelhorst's request, his body was donated to the St. Louis University Medical School, for the advancement of science.

A Memorial Mass will be held at Holy Rosary Catholic Church on December 15, 2022, at 10:00 am. A luncheon will be served following Mass at the Parish center.
Memorial donations can be given to the St. Vincent De Paul Society c/o Martin Funeral Home 510 East Main Street, Warrenton, Missouri 63383.

Online condolences can be made at www.martinfuneral.net