For the Warrenton wrestling team, an expectation of improvement combined with the goal of a conference championship has the 2021-2022 season set up to be an interesting year for coach Clayton Olsson … 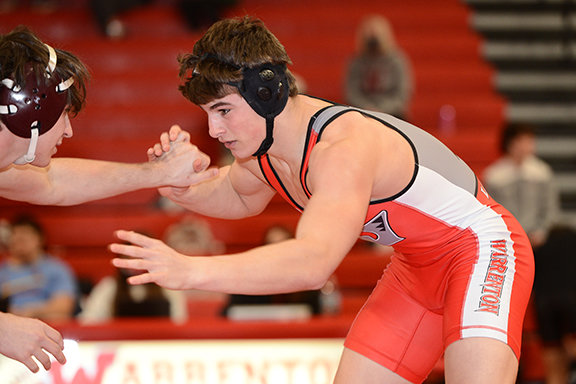 For the Warrenton wrestling team, an expectation of improvement combined with the goal of a conference championship has the 2021-2022 season set up to be an interesting year for coach Clayton Olsson and the Warriors.

“The expectation every year is the same, to improve and get better. With that said, as a team last year we were one win shy of a conference title. We actually lost due to tiebreaking criteria, so this year with our returners and the new guys we have coming up, I would love to see us improve on that result and be conference champs this year,” said Olsson, who coached the Warriors to a 13-9 record in dual meets last season. “We also only had one state qualifier last year, but we had a lot of guys that were right on the edge. This year I could see us getting six or seven state qualifiers and hopefully a couple of state medals.”

The Warriors also have some new faces on the team this year, and Olsson believes they can step in and have an impact.

“We have a great group of new wrestlers this year and all of them have already shown a great amount of potential,” he said. “Some of our key additions that can help us achieve our goals as a team are freshmen Manny Mccauley, Noah Lohrman, and Austin Haas, sophomore Nick Schulze, and senior Rigo Orozco.”

On the girls side, Warrenton has two grapplers — junior Madison Nash and freshman Caelyn Hanff. Nash is a first-year wreslter, while Hanff competed at the middle school level.