For Wright City’s Ada Ferrell, being one of the best junior rodeo riders in the state has been a lifelong endeavor. Next week, she travels to see how she fares against the best young riders in … 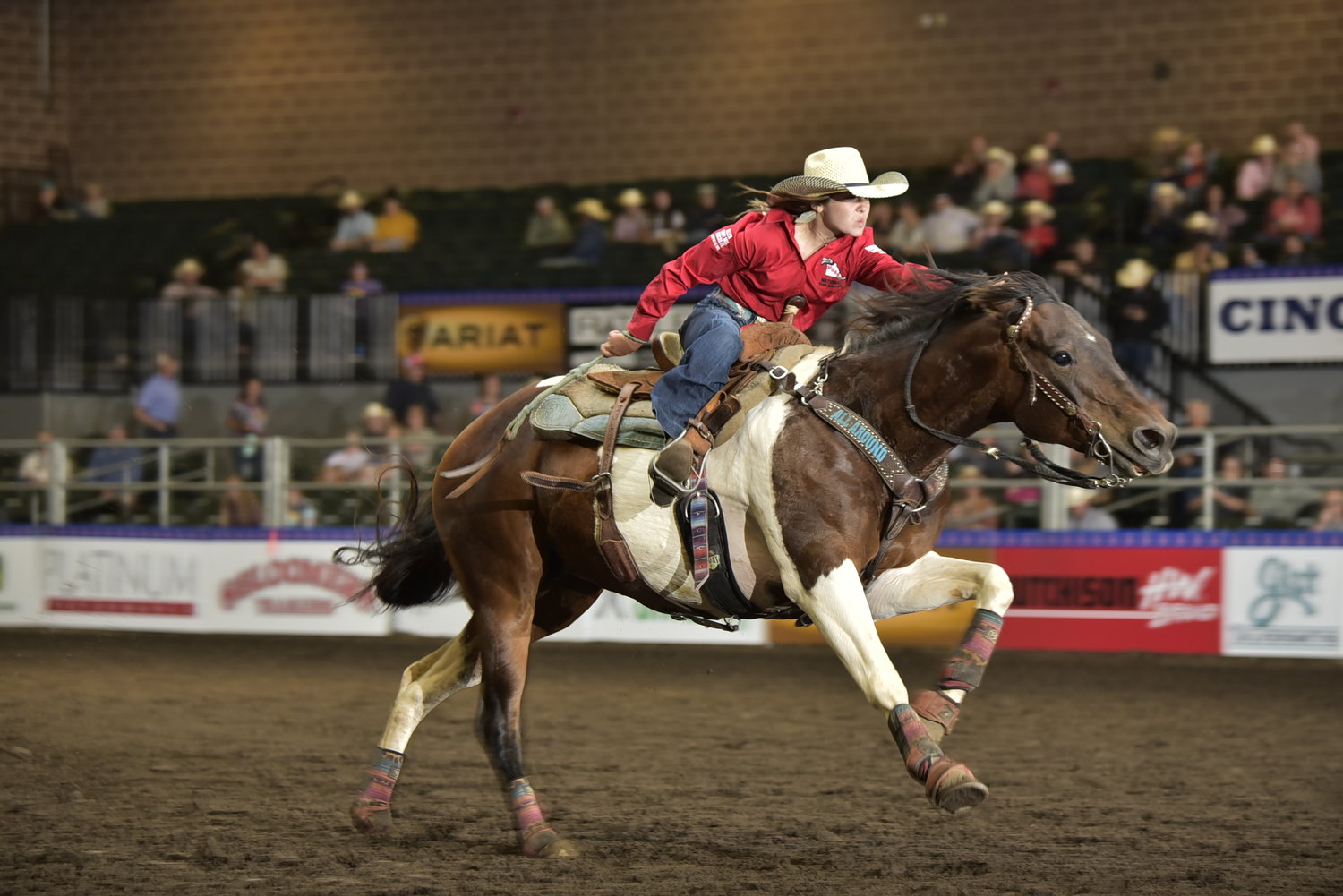 CHAMPION RIDER — Ada Ferrell and her horse race across the ring in one of this year’s rodeo competitions. Ferrell earned top-four placements in multiple categories at the state level and is heading to a national junior high finals event.
Adam Rollins photo
Posted Friday, June 17, 2022 5:00 am
Adam Rollins, Staff Writer

For Wright City’s Ada Ferrell, being one of the best junior rodeo riders in the state has been a lifelong endeavor. Next week, she travels to see how she fares against the best young riders in the nation.

Ferrell, 13, is heading to compete in the National Junior High Finals Rodeo in Perry, Georgia, June 19-25, after placing in the top four competitors in multiple state-level categories. This will be her second year attending the national-level competition, where she’ll face off against hundreds of competitors.

“I was really happy (with my placement). All year, I’ve been working really hard. I’ve wanted to go to nationals,” Ferrell told The Record.

Ferrell placed in the top four Missouri junior high competitors in four out of the five categories she competed in: ribbon roping, girls goat tying, pole bending and barrel racing. Competitors earn points in each category by competing in events throughout the year, with extra weight given to placements at the Missouri finals that took place in May.

Getting into the top ranks for her age group has meant daily practice for Ferrell, whose family is full of fellow rodeo riders. Every evening, she’s out tying goats, doing rides and training horses. Multiple times each month, she’s out at competitions.

“My life is rodeo. I love it,” Ferrell said. “It’s so different from other sports. ... You have such a good bond with those animals that it makes it fun.”

It’s through that bond with their horses that rodeo riders find a lot of success in competition. But, as Ferrell found out this year, that connection can come with some anxieties as well. Ferrell was on her way to taking the top rank in multiple categories this year when her primary racing horse was injured just a few events short of the state finals. She had to switch to an unfamiliar backup partner to rescue her top-four positions.

“When my horse got hurt, my paint horse, I didn’t know what I was going to do,” Ferrell noted. “I practiced (with a backup), but then I did bad at the rodeo. Luckily, my paint horse had gotten me enough points that I had a cushion and could still make it.”

In her second year at the national junior high competition, Ferrell said she’s keeping realistic expectations for how she’ll perform against a field that includes not only high-level riders, but also horses that have been professionally bred for these competitions. As long as she can meet her own expectations on the national stage, she’ll be happy.

Charlie Clark, Ferrell’s grandfather and a resident of Jonesburg, has been proud to see his grandchildren growing up to love and champion his family’s favorite sport. Ferrell and her sister, Charleigh, are fourth-generation riders, and have both earned state championships and seen national competitions.

“By the time they were 5, they were running barrels already,” Clark said with a laugh.

He added that it’s always exciting and nerve wracking to watch his granddaughters compete. He wants them to do well, but mostly he wants them to be able to have fun.

Clark said his fervent wish is that the kids doing well in rodeo got more recognition from their school and community.

“(Ada and Charleigh) have been state champions. ... I’d like to see it more recognized,” Clark said. “They’re representing Wright City, going to the national finals. That’s really something.”