Dogs have one of the most sensitive noses on earth. According to the American Kennel Club, a dog’s nose contains approximately 225 million scent receptors, compared to the human nose, which … 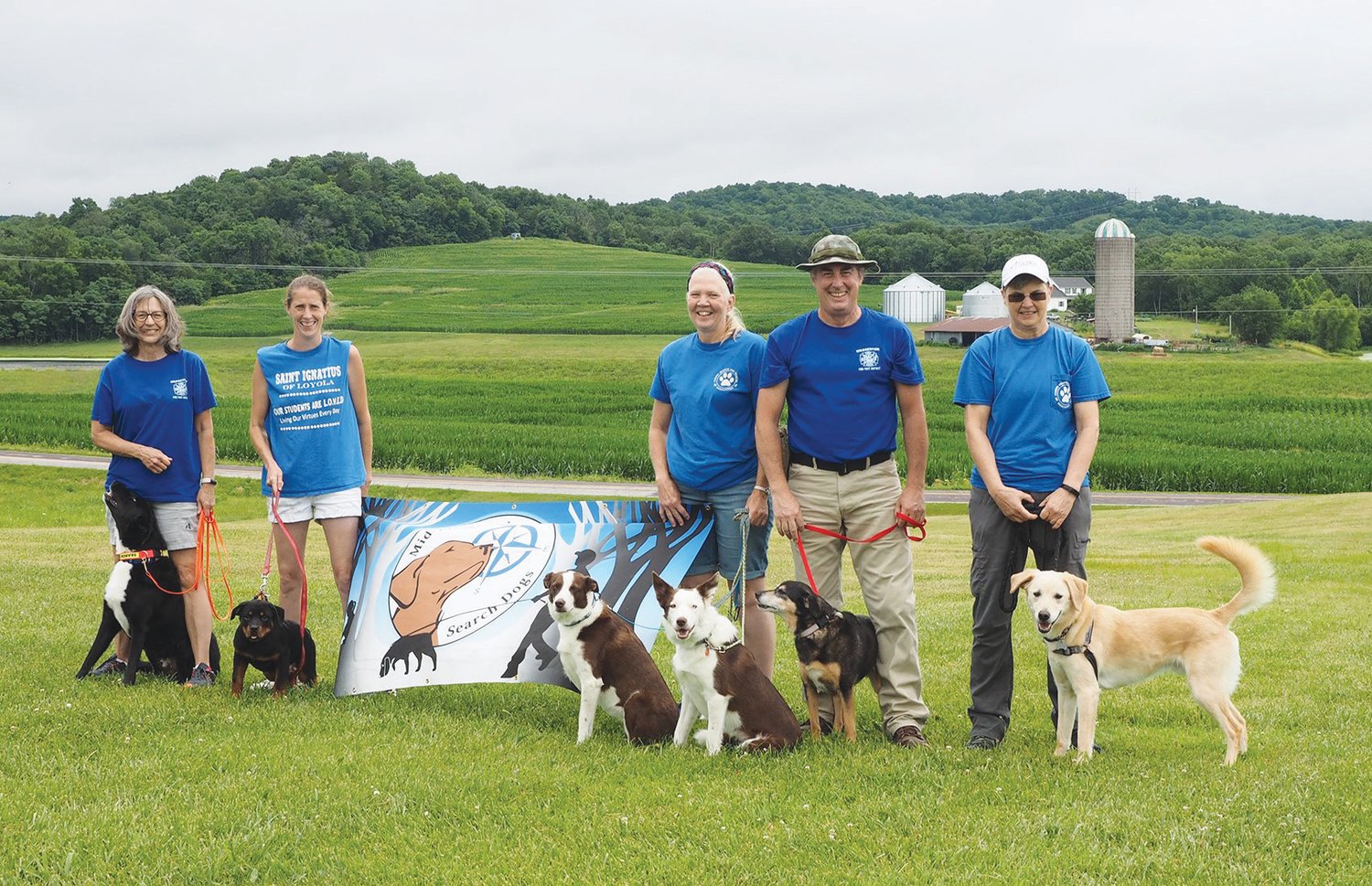 VOLUNTEER SEARCH TEAM — The Mid-Missouri Search Dogs gathered Saturday, July 9, on the grounds of Charrette Baptist Church in Marthasville, to practice essential search and rescue skills with their canine counterparts. The volunteers help aid first responder agencies in searching for lost persons or for human remains in a variety of environments and weather conditions. Pictured from left, are Laura Langton with Gimli; Jennifer Poindexter with Ellie; Glenda Eichmeyer with Juno and Athena; Shane Wohler with Xena; and Jackie Bross with Ace.
Cindy Gladden photo 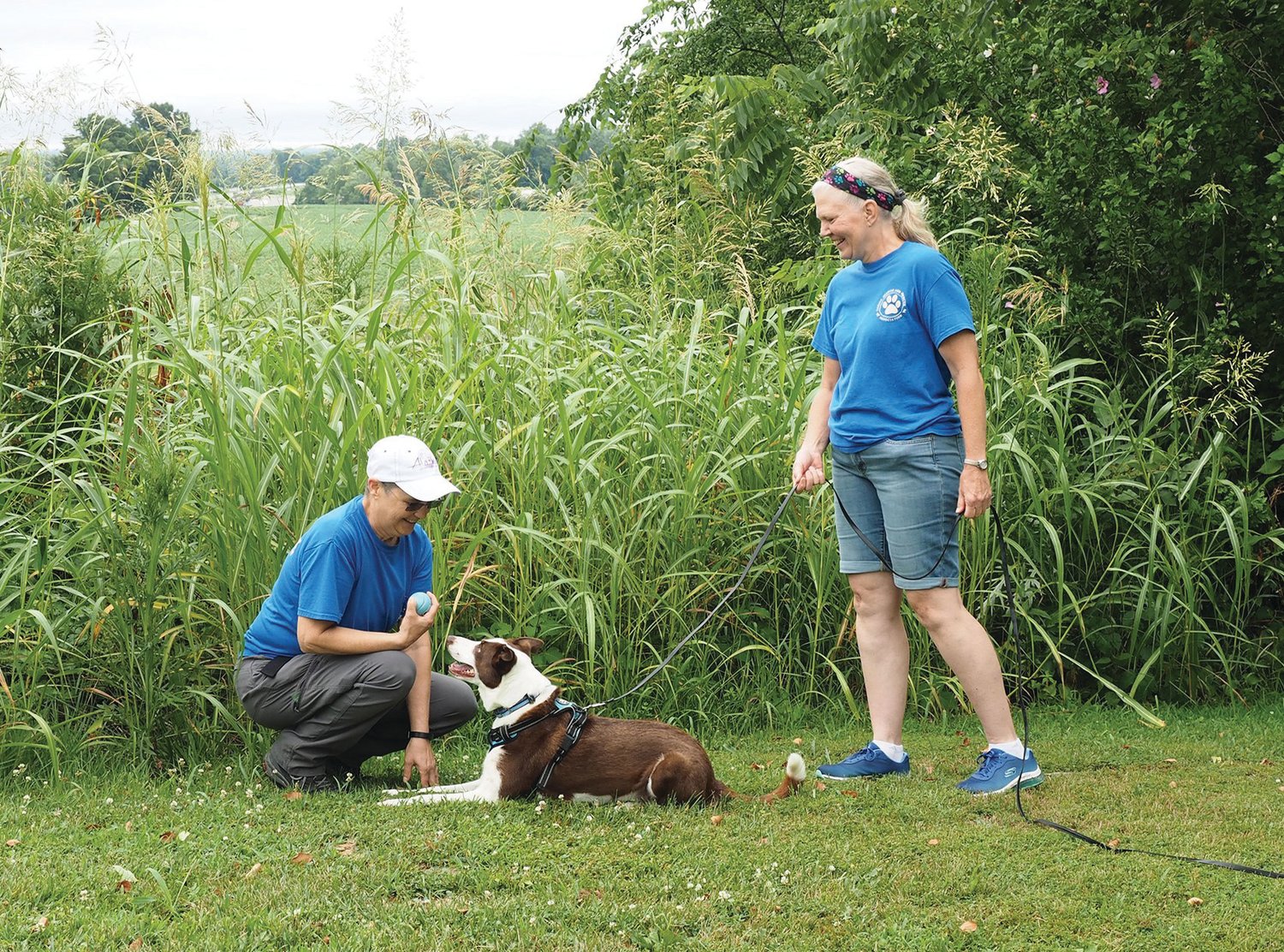 SUCCESSFUL FIND — Border Collie Juno, a tracking and trailing search dog, owned by Glenda Eichmeyer, right, has successfully located team member Jackie Bross, left. Bross is rewarding Juno for a job well done by allowing Juno to play with the toy of her choice as a reward. Search and rescue dogs were honing their skills in a training held Saturday, July 9.
Cindy Gladden photo
Previous Next
Posted Monday, July 25, 2022 11:24 am
Cindy Gladden, Correspondent

Dogs have one of the most sensitive noses on earth. According to the American Kennel Club, a dog’s nose contains approximately 225 million scent receptors, compared to the human nose, which contains only 5 million.

Search and rescue dogs are known for their amazing ability to sort those smells and help a variety of law enforcement and search agencies identify drugs and explosives, follow a trail of a missing person or find human remains on land or in water.

“You can’t match the nose,” said Glenda Eichmeyer as she introduces a team of volunteer handlers and their canine counterparts.

Mid-Missouri Search Dogs (Canine Search and Rescue Association) provides trained dogs who are available to respond with local first responders to locate lost or missing persons in a variety of environments. They are certified in trailing, air scent and human remains detection.

Recently, one of the dogs was certified according to FEMA guidelines to respond with Missouri Task Force 1, which is managed by the Boone County Fire Protection District. The team is specially trained to respond to natural disasters around the United States.

Athena, a brown and white border collie, handled by Eichmeyer, recently passed rigorous testing and will accompany Eichmeyer to areas hit by tornados, hurricanes or other situations where search dogs are required.

Juno, another border collie in Eichmeyer’s kennel, is certified in live tracking. During a local training event, Eichmeyer engaged Juno in an exercise to let her know the person or scent they were seeking was not in the area using a technique called casting, which includes searching a large circular area.

In addition to the canine certifications, Eichmeyer is rich in certifications, including crime scene preservation, K9 First Aid, Scent Theory, Lost Person Behavior and a long list of additional certifications she uses to be ready to respond locally or with Missouri Task Force 1.

Five members of the team recently conducted a team training on the grounds of Charrette Baptist Church in Marthasville. Several challenges were presented to the dogs. Xena, a mixed breed rescue dog, works with handler Shane Wohler. Xena, who would probably qualify as a senior citizen, excels as a human remains detection dog.

Wohler said some dogs will react to the distinct smell of human remains, but don’t like it, and don’t excel as human remains detectors. Xena, on the other hand, is an expert at finding a deceased person.

“She won’t react to dead animals,” said Wohler. “She will sit and look at me when she has detected something. She will even lift her nose if the item is up high lodged in a bush or tree.”

Jennifer Poindexter attended the training with rookie Ellie, a young Rottweiler. Ellie was just starting her training. She was asked to follow her handler and “locate” her on an easy test run.
Also working on live tracking was Gimli, a male border collie, with handler Laura Langton. Ace, owned by handler Jackie Bross, is currently in training as a human remains detection dog.

“We always want to end on a good note,” said Eichmeyer. “They are processing what they have done and remember it. We also let them choose the job they want and the reward they prefer. Sometimes they are treat driven, and sometimes they are toy driven.”

Bross said you have to work their minds to get them to rest. She said sometimes bad behavior in a dog can be interrupted by challenging their thinking, not just giving them physical exercise.

Dogs on Duty, a therapy dog group which provides equipment to first responders, recently awarded Mid-Missouri Search Dogs with five GPS collars worth more than $3,500. The group has provided cooling vests and Kevlar vests to police dogs. Their therapy dogs often visit schools and other groups to provide information about their organization. More information can be found at dogsonduty.org.

Mid-Missouri Search Dogs is available to first responding agencies 24 hours a day at no charge. To learn more about the organization, visit www.searchk9team.org. The entire team logs more than 45 years of experience and more than 3,000 hours of instruction. Eichmeyer can be reached by emailing k9team@searchk9team.com.