R-II board to make decision on Tuesday

The Wright City R-II school board is set to hold a special meeting Tuesday to award a bid for construction of the new high school.

R-II board to make decision on Tuesday 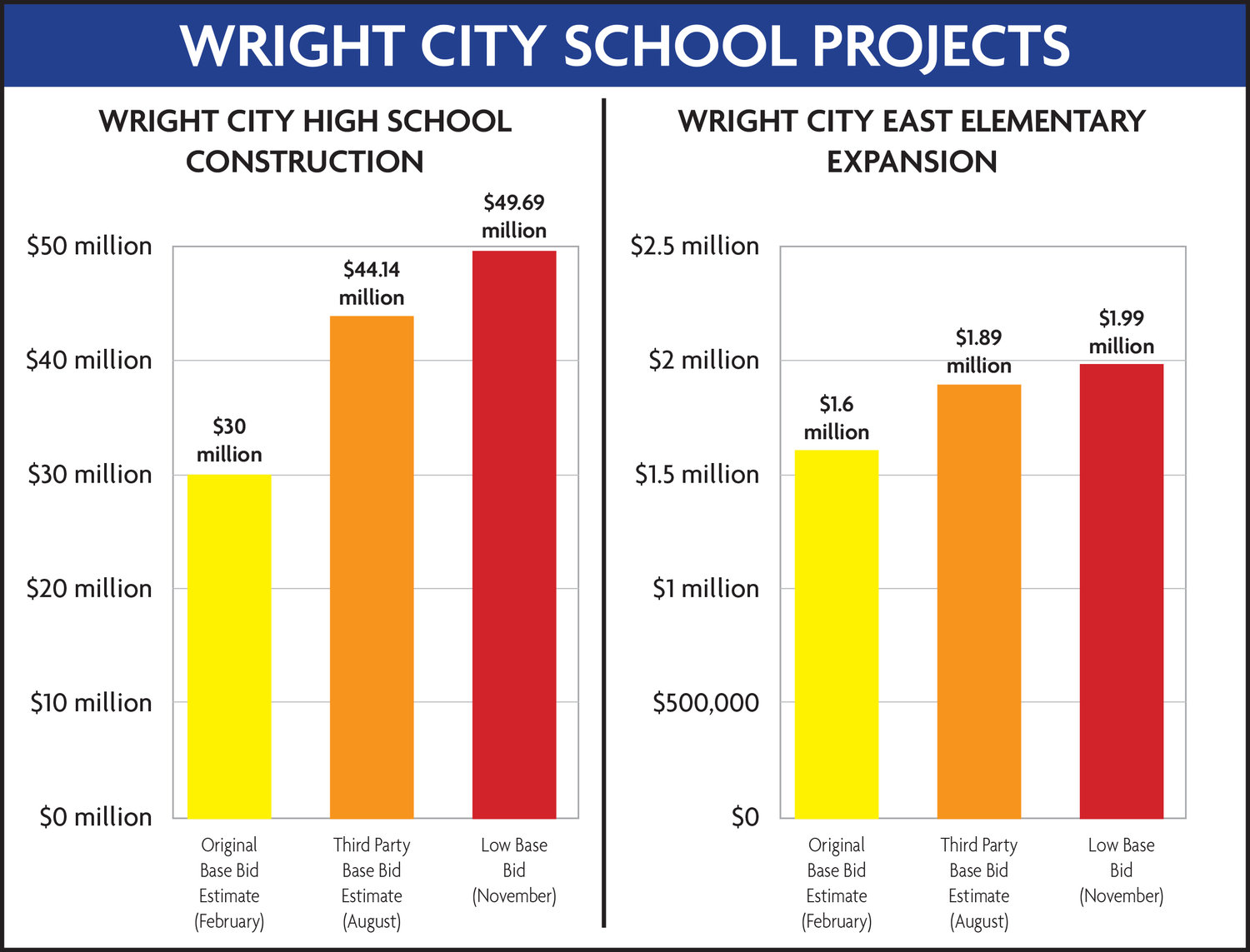 Updated 11/22/2022 with additional information and comments about the status of the school district's financing for construction.

The Wright City R-II school board approved a bid for the expansion of East Elementary School last week, with a vote on bids for the new high school slated for earlier this week.

The board voted 7-0 last week to approve the low bid from Aspire Construction Services for the East Elementary addition, which calls for four additional classrooms at the school. Aspire’s bid came in at $1.99 million. The third party estimate was about $1.4 million.

The board was set to consider bids Nov. 22 for the construction of Wright City High School. The board received three bids for the high school construction.

Wright Construction Services Inc. submitted the low base bid for the high school project at just under $49.7 million. That’s about $5.5 million higher than the third party cost estimate of about $44.2 million.

LCS Landmark LLC’s base bid was $111,000 higher than Wright Construction’s low bid, coming in at just under $49.8 million. ICS Construction Services submitted the high base bid at $52.1 million.

The base bid only includes construction of high school classrooms and necessary school facilities.

Wright City R-II superintendent Chris Berger thinks the board and district are victims of the highest inflation rates in 40 years. He stressed the district received multiple estimates prior to receiving bids earlier this month. They obtained multiple cost estimates from the architect and also received a third party estimate.

“All those efforts combined still didn’t keep up with inflation,” Berger said. “I think we did better than some of my colleagues in the region in terms of projections versus bids. I think that due diligence put forth by the board paid off but it didn’t catch it completely.”

The board at Tuesday’s meeting was slated to consider the base bids and also bids for the three alternates. They received alternate bids for the football stadium, performance gymnasium and baseball and softball field.

Base and alternate bid options

Bids received by the district indicate they will not have the funds to take the base bid and all three alternates unless they choose to dip into operational funds.

The cost if the district took the low base bid and all three alternates would be about $63.4 million. This does not include the architect and engineering fees and contingency funds. Architect and engineering fees are expected to cost over $3.9 million .Contingency funds are expected to add $2.5 million to $3.2 million. It also does not include phase two of the project. Phase two, which calls for renovation of the existing high school and existing administration building, is expected to cost over $2 million.

“We’ve been preparing,” Berger said. “The money that we have on hand outside of the general obligation bonds from Proposition 67 and outside of the revenues generated by the lease purchase certificates of Proposition 2025 are a result of the board’s efforts of knowing that they may have to subsidize the project the best they could with local dollars.”

Projections from Stifel Financial Services estimate they could get the district an additional $3.2 million without requiring the use of district operating expenses. This would give the board about $66 million to use for phases one and two of the projects. The board will be presented with a more precise number at Tuesday’s special board meeting.