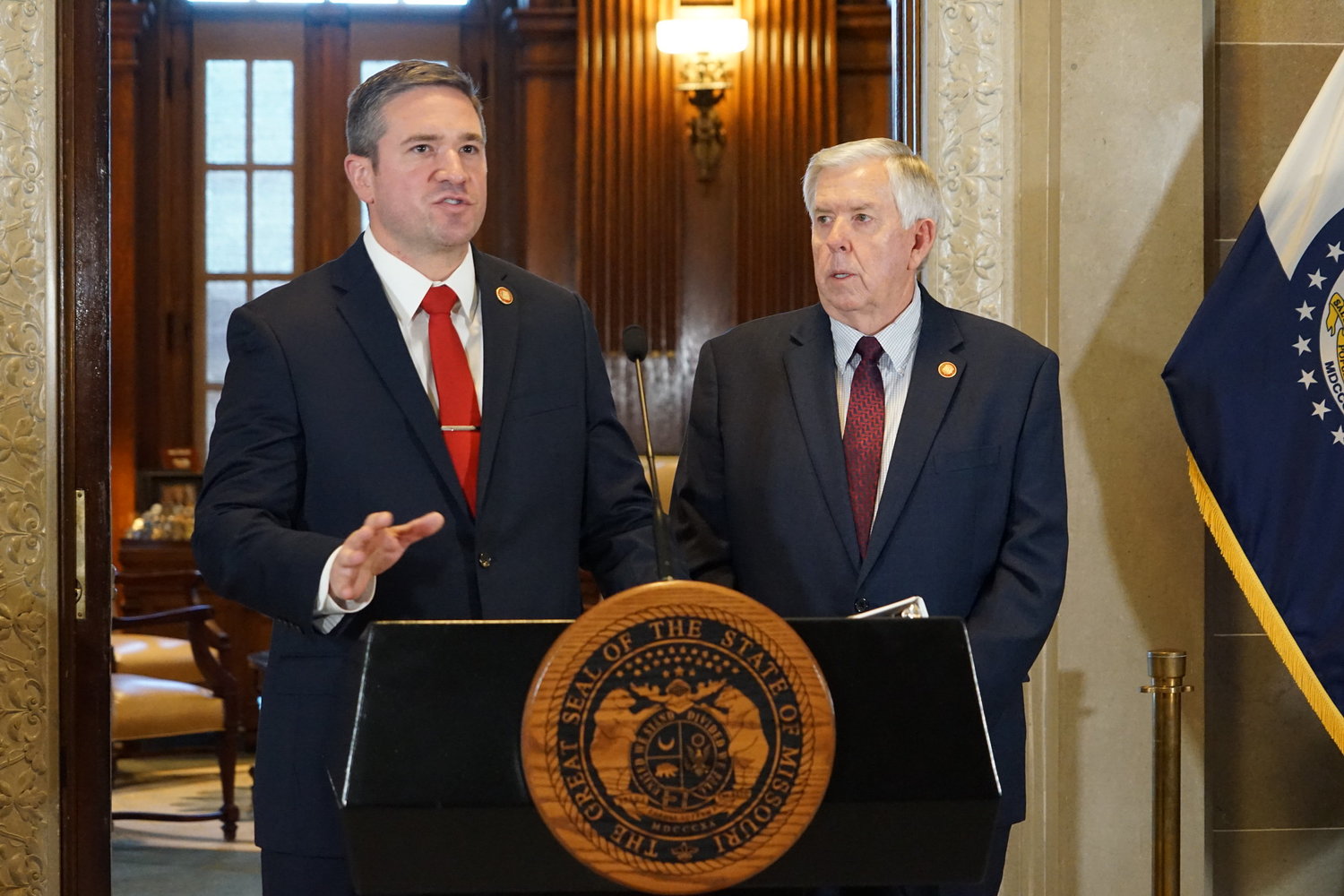 Rhineland resident Andrew Bailey talks to an audience after being appointed as Missouri's next attorney general on Nov. 23, while Gov. Mike Parson looks on. Bailey was an assistant prosecutor in Warren County before taking a job in state government.
Photo courtesy of Missouri governor’s office
Posted Friday, December 2, 2022 5:00 am
By Jason Hancock, Missouri Independent

Bailey, 41, who has served as general counsel for Gov. Parson for the last year, will replace Attorney General Eric Schmitt, who was elected to the U.S. Senate in November. Bailey will complete Schmitt’s term, which ends in 2024.

Parson made the announcement on the morning of Nov. 23.

According to the governor’s office, Bailey has roughly eight years of professional experience as an attorney, including stints working as an assistant prosecuting attorney in Warren County and as an assistant attorney general. His previous jobs in the Parson administration were as deputy general counsel for the governor and general counsel for the Missouri Department of Corrections.

He is an Army veteran that was awarded two Army Achievement medals, an Army Commendation medal, a Combat Action badge and two Bronze Star medals for his service.

“My entire career has been defined by public service,” Bailey said. “Now, I’m ready to continue that service as your Attorney General, where I will work tirelessly to earn your trust and never stop fighting on your behalf.”

On Nov. 23, Bailey pushed back on any suggestion he doesn’t have the needed experience to be attorney general.

“I’m battle tested and I am ready for this job,” Bailey said.

Parson said one of his top considerations on who to appoint was stability in the office that has seen the last two incumbents leave for higher office.

“Stability was critical when considering the next attorney general,” Parson said.

Bailey vowed to run for the office in two years.

Parson said Bailey was critical to much of the governor’s agenda over the last few years, pointing specifically at efforts to “end elective abortions in Missouri” and “strengthen the Second Amendment protections.”

He also gave Bailey credit for efforts the governor’s office has made to close over 2,000 clemency files and fill more than 100 judicial openings.

Schmitt got the job in 2018, after then-Attorney General Josh Hawley was elected to the Senate.

“Few Missouri governors have had the opportunity and responsibility to appoint an attorney general on the behalf of the people of Missouri once, let alone twice,” Parson said.