Farmers compete to show who’s got the down-home skills

Greatest Showman and Super Farmer get lots of laughs

Showing livestock at the Warren County Fair is serious business to the 4-H and FFA kids who work hard to raise and show their animals. But one not-so-serious event is geared to past showmen who want …

Farmers compete to show who’s got the down-home skills

Greatest Showman and Super Farmer get lots of laughs 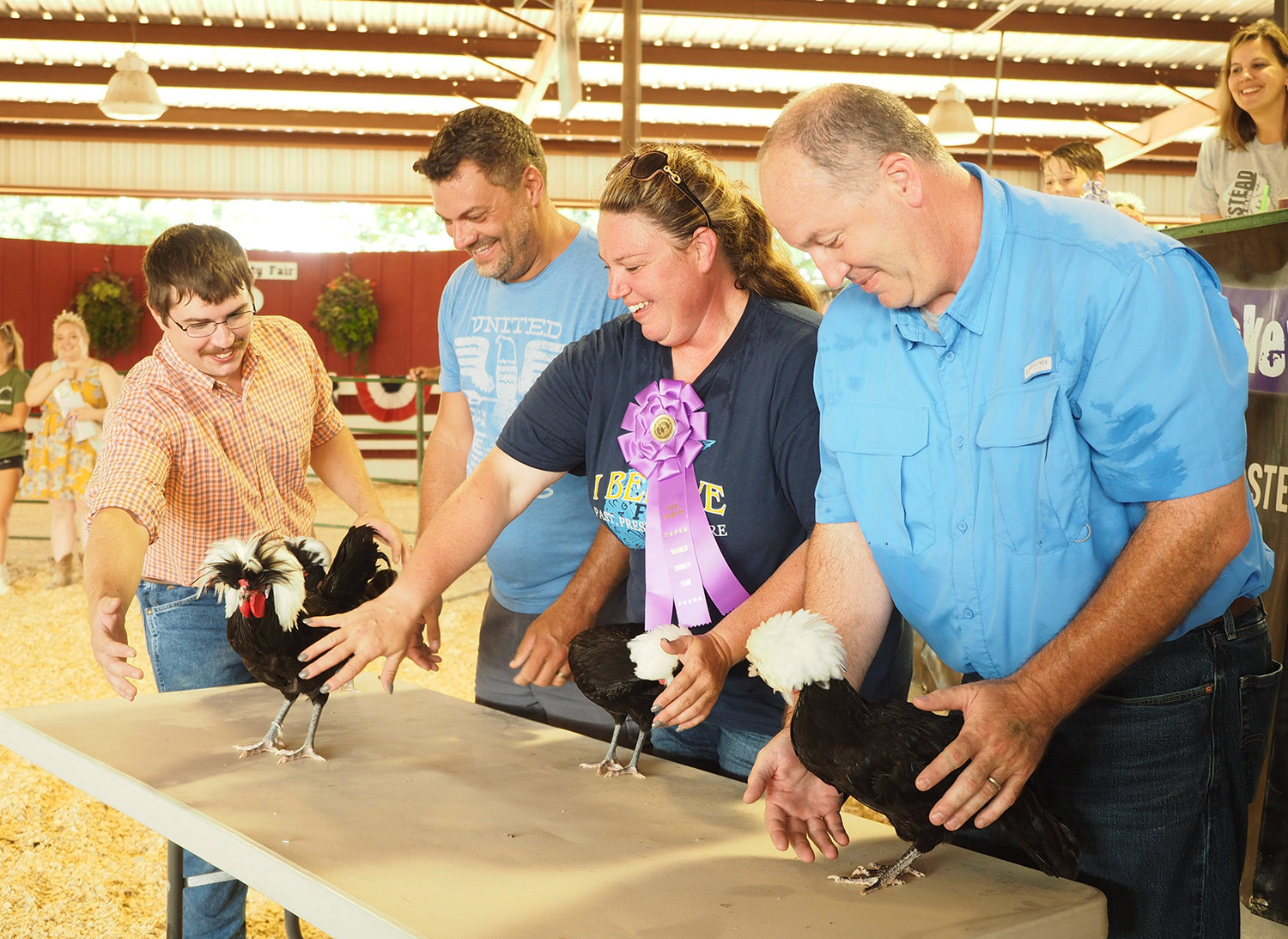 CORRALLING THE CHICKS — Four alumni 4-H or FFA contestants entered chickens in the Greatest Showmen competitions Friday, July 8, at the Warren County Fair in Warrenton. The chicken on the left, handled by Nathan Hummert, unfortunately flew the coop and joined spectators for a time, earning the “You Stink” award. Shawn Miederhoff, with his well-controlled chicken on the right, won the Greatest Showman award.
Cindy Gladden photo 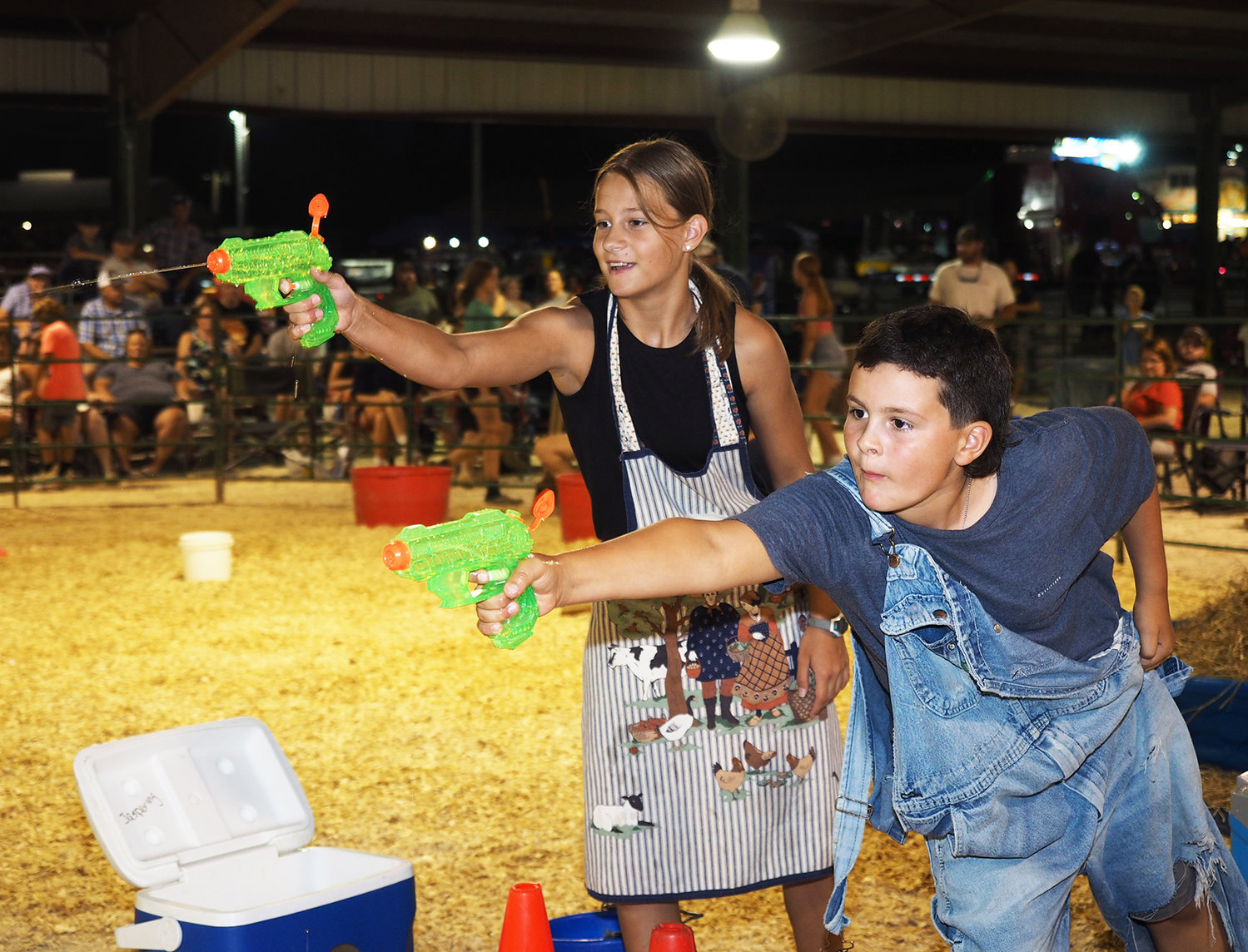 Showing livestock at the Warren County Fair is serious business to the 4-H and FFA kids who work hard to raise and show their animals. But one not-so-serious event is geared to past showmen who want to give it another go.

On Friday evening, July 8, the Greatest Showman event was held in the livestock barn at the Warren County Fair. Older FFA and 4-H alumni borrowed an animal from their kids or a friend to prove they still had the right stuff, or not, and to have a little fun.

Kadelyn Huster, 4-H team leader, was the chairperson of the event. She said the contestants would be showing chickens, goats, hogs and cattle. Two awards were given for each category, the Best Showman and the You Stink award.

Judges were Robin Meier, Dawn Sherman and Izzy Freymuth, who plied the contestants with serious and not-so-serious questions about the animals they brought into the ring.
“At the end of a long week, it’s fun to let loose a little bit,” said Freymuth.

“It’s just a friendly little competition,” said Sherman, adding she expected the crowd would get some laughs too.

Four chickens entered the ring first. Shawn Miederhoff took the Best Showman award. Nathan Hummert, whose chicken escaped and had to be caught by onlookers, earned the coveted You Stink award.

Chip Branson, still proving that he indeed still had the right stuff, won the Best Showman award in the goat competition, with Jayna Haman, smiling until the last, coming in last with the You Stink award.

Hogs pretty much owned the arena with the showmen sweating to keep them under control. Steve Molitor received the Greatest Showman award, with the You Stink award going to Angie Duncan.

All contestants were asked questions about their competing livestock — from “why did the chicken cross the road” to questions about breed and weight. All the alumni showmen were good sports and no animals were injured during the competition.

A variety of stations were set up for the contestants to complete and the timer was running. Rick Brandt and Eddie Meyer gave a play-by-play commentary, reminding the contestants of their next challenge, and providing a bit of comedy as the contestants completed their tasks.

A team consisted of two super farmer contestants in several age groups, including 10 years old and younger, 11 to 15-year-olds, 16 and over, and parents and children.

As the teams began the competition, bib overalls and an apron were donned, and the race began. Throughout the entire course, lunch buckets were carried and added to as they completed each station.

Straw bales were piled on a wagon, post hole diggers were used to transfer straw to a bucket, sunflower seeds had to be spit into a feed pail and nails had to be sunk in a 2x4. To finish the competition, needles had to be located in a pile of straw, water guns were used to knock down Dixie cups, a gate had to be hung, then each pair finished up by posing for an American Gothic-style photo, complete with dress, jacket and pitchfork.

The clock stopped when the bibs and apron were hung back on the clothesline and the farm bell was rung.

First place winners in the 10-years-old and younger were Claire Koch and Grant Korman, followed by Kinze Dent and Ty Mikus in second, and Corbyn Sitze and Gracie Koch in third.

Finishing first in the 11 to 15-year-old category was Nicholas Benne and Taylor Duncan. Second place went to Claire Schroeder and Wyatt Korman, followed by Bryan Banze and Blaine Nordwald in third.

The competition got a little more difficult for the 16-year-old and older category. More straw bales were heaped on the wagon and the length of the squirt gun targets were farther away. The team with the best time was Megan Abel and Jeff Nordwald. Second place went to Jacob Abel and Rachel Earlewine, with Corbin Schone and Bailey Love in third.

Adult super farmers and their children finished up the competition with some expert skills. First place went to Dustin and Kaylee Mikus. Second place finishers were Chuck and daughter Reagan Vehige. Third place went to Pat and Brooklyn Schneider.