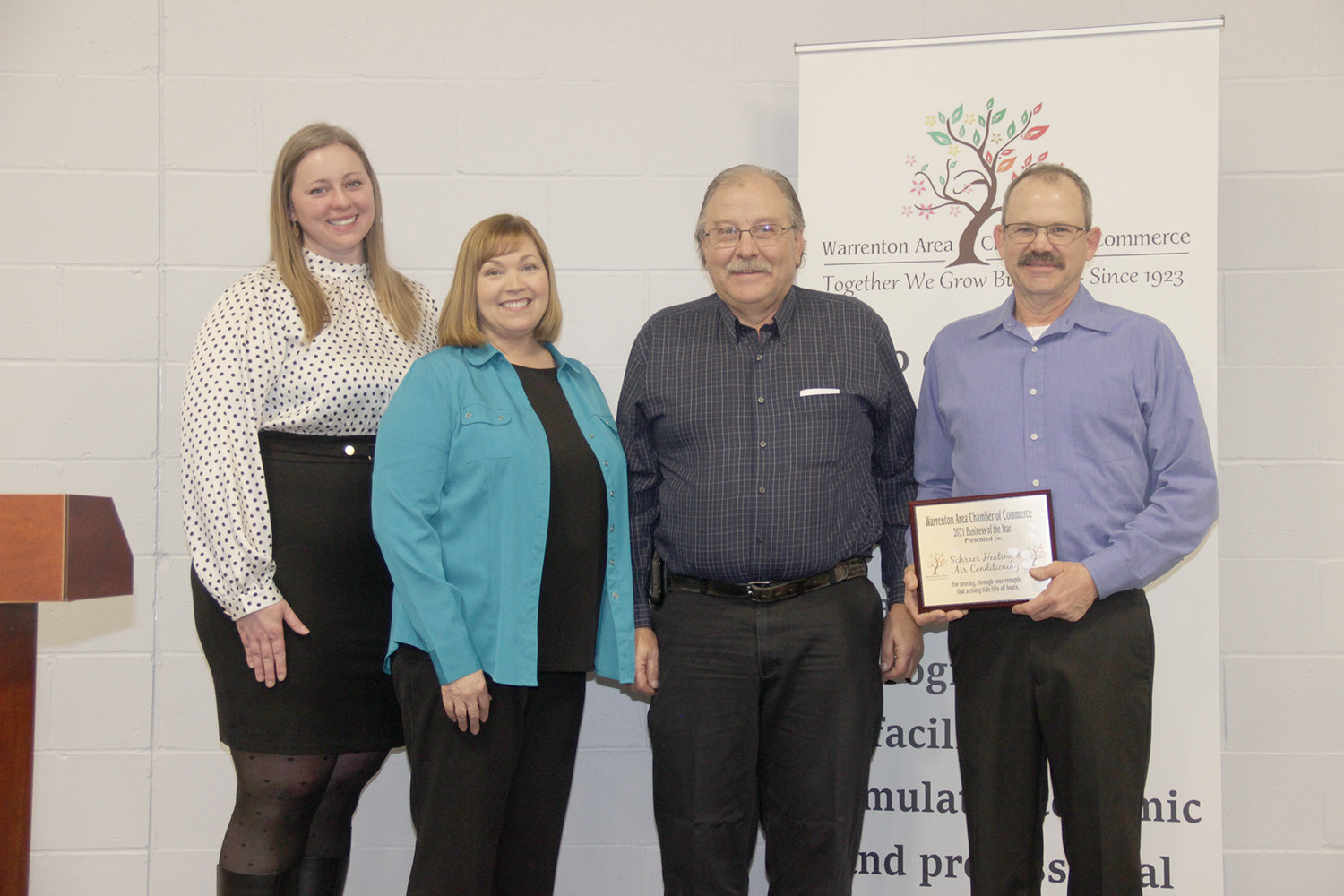 BUSINESS OF THE YEAR — Owners of Schraer Heating and Air Conditioning accept the award for Business of the Year during the Warrenton Area Chamber of Commerce awards banquet on Jan. 14. Pictured, from left, are Chamber President Katie Joyce, with Schraer owners Michelle Woolf, Gary Scott, and Bill Woolf.
Adam Rollins photo 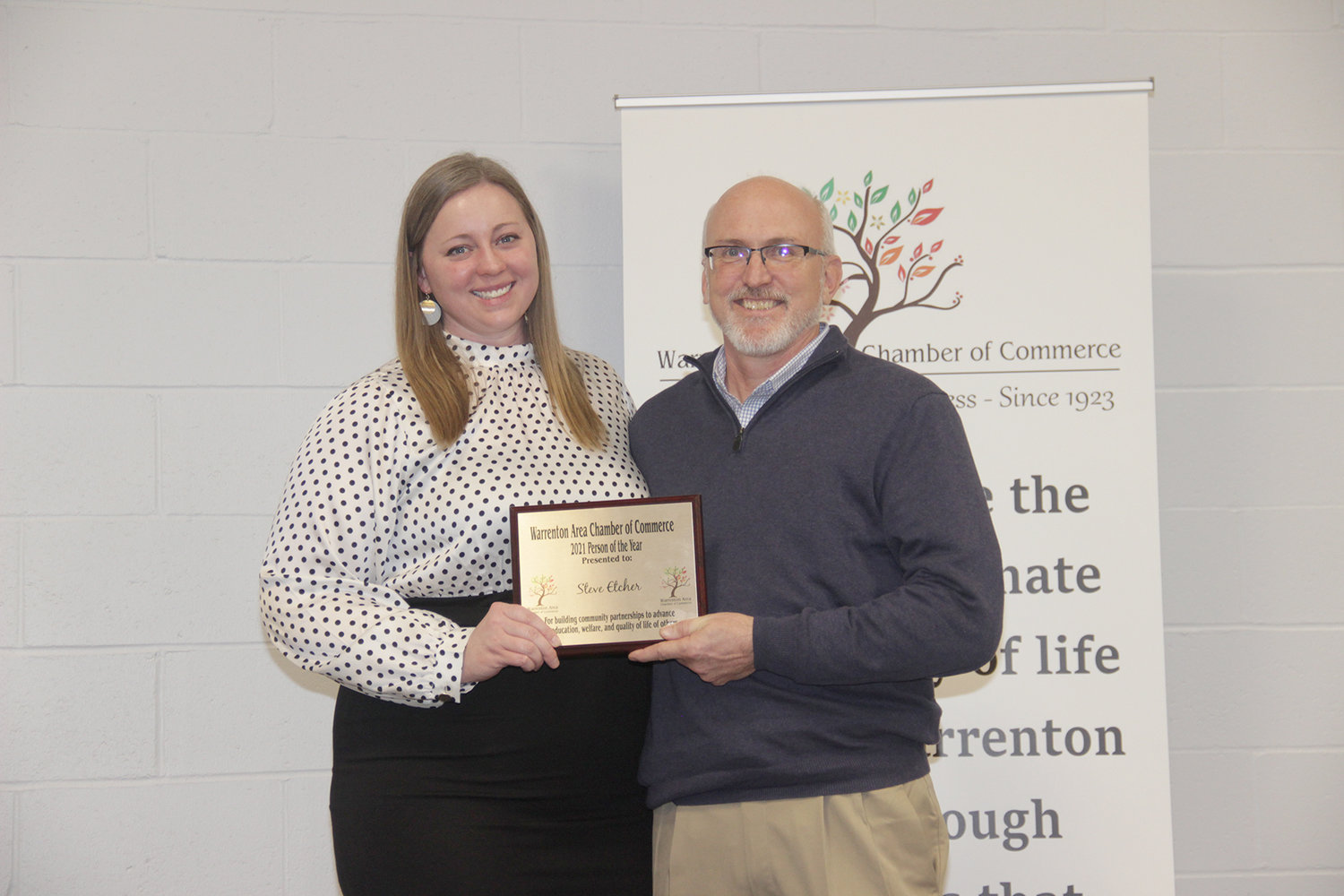 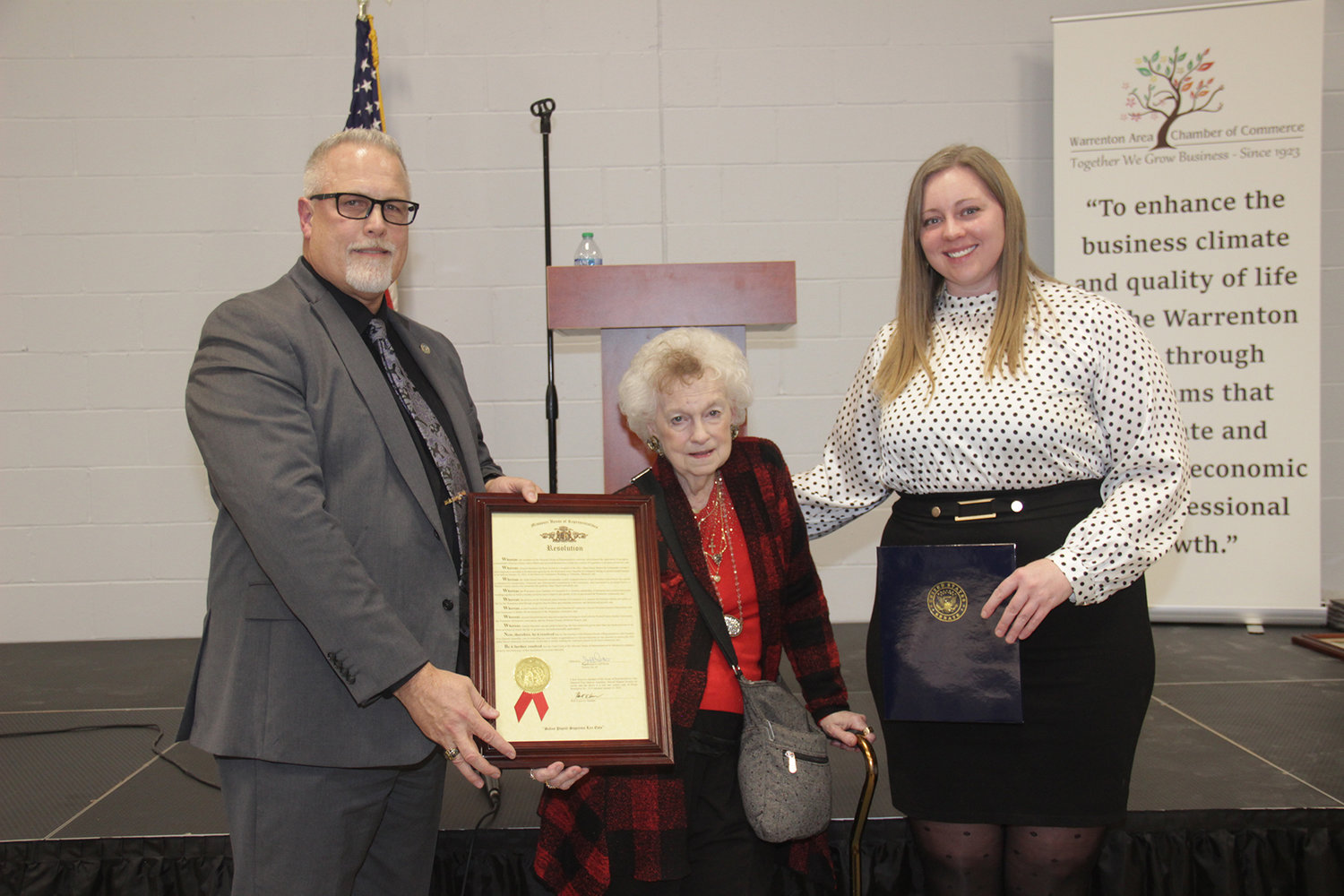 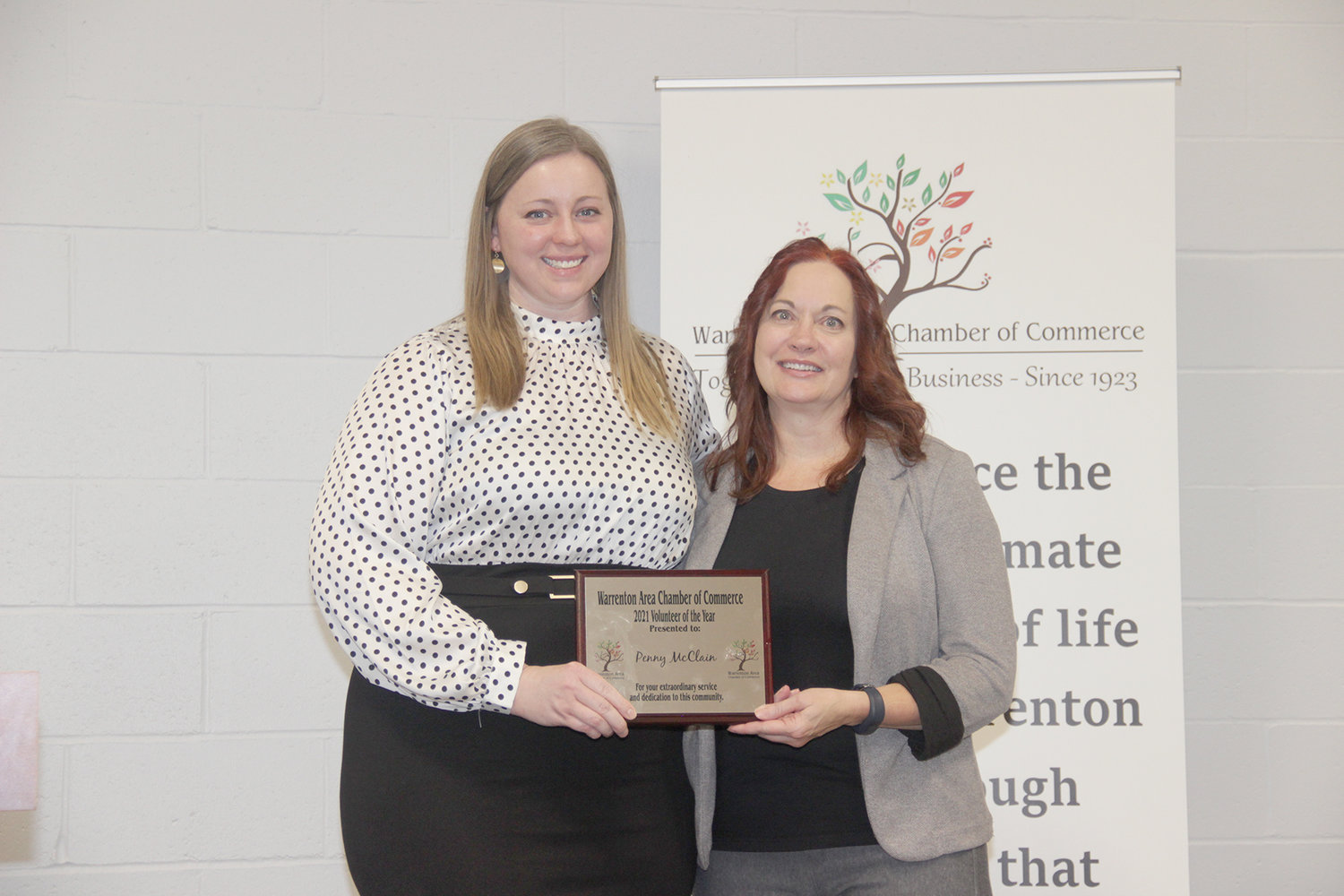 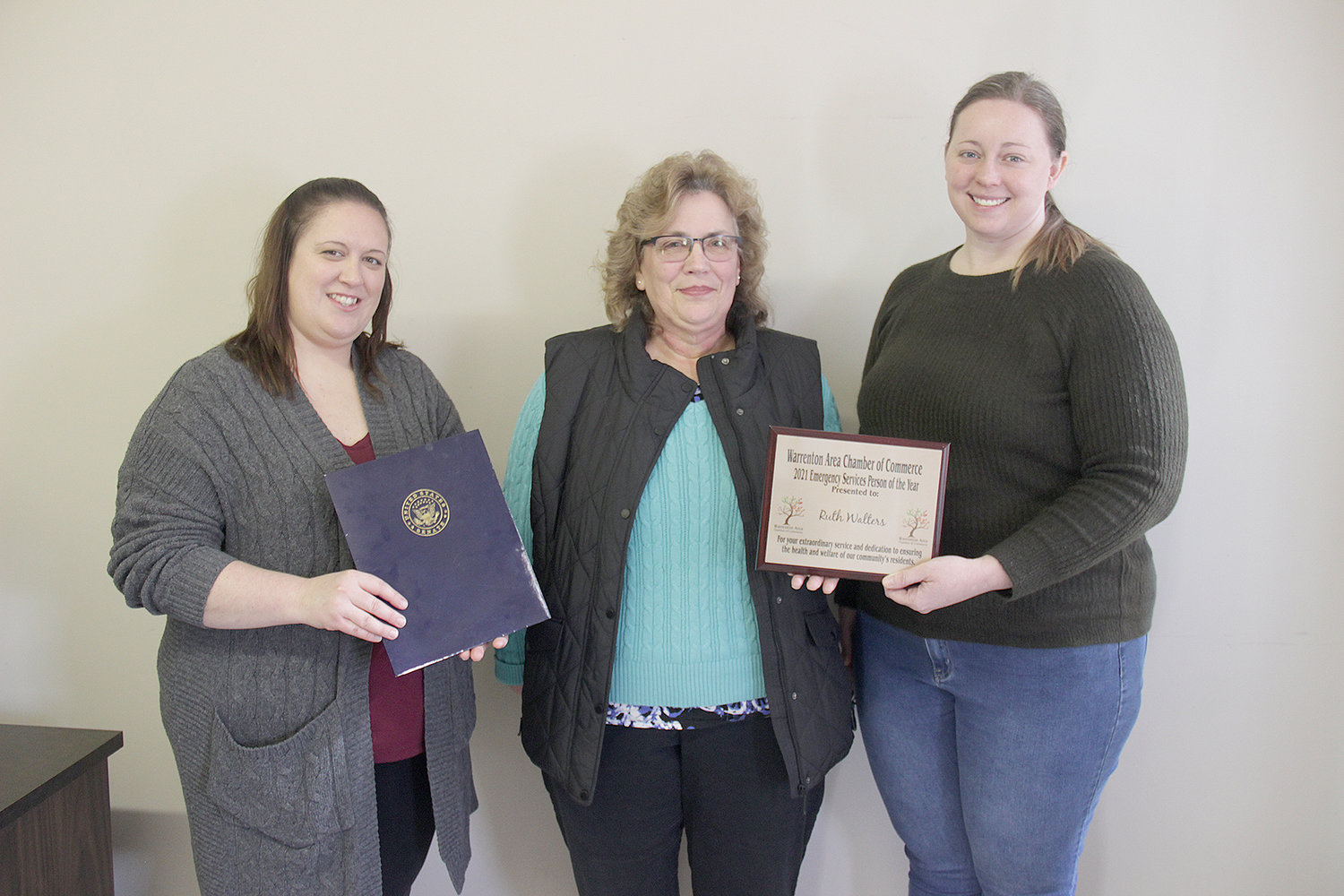 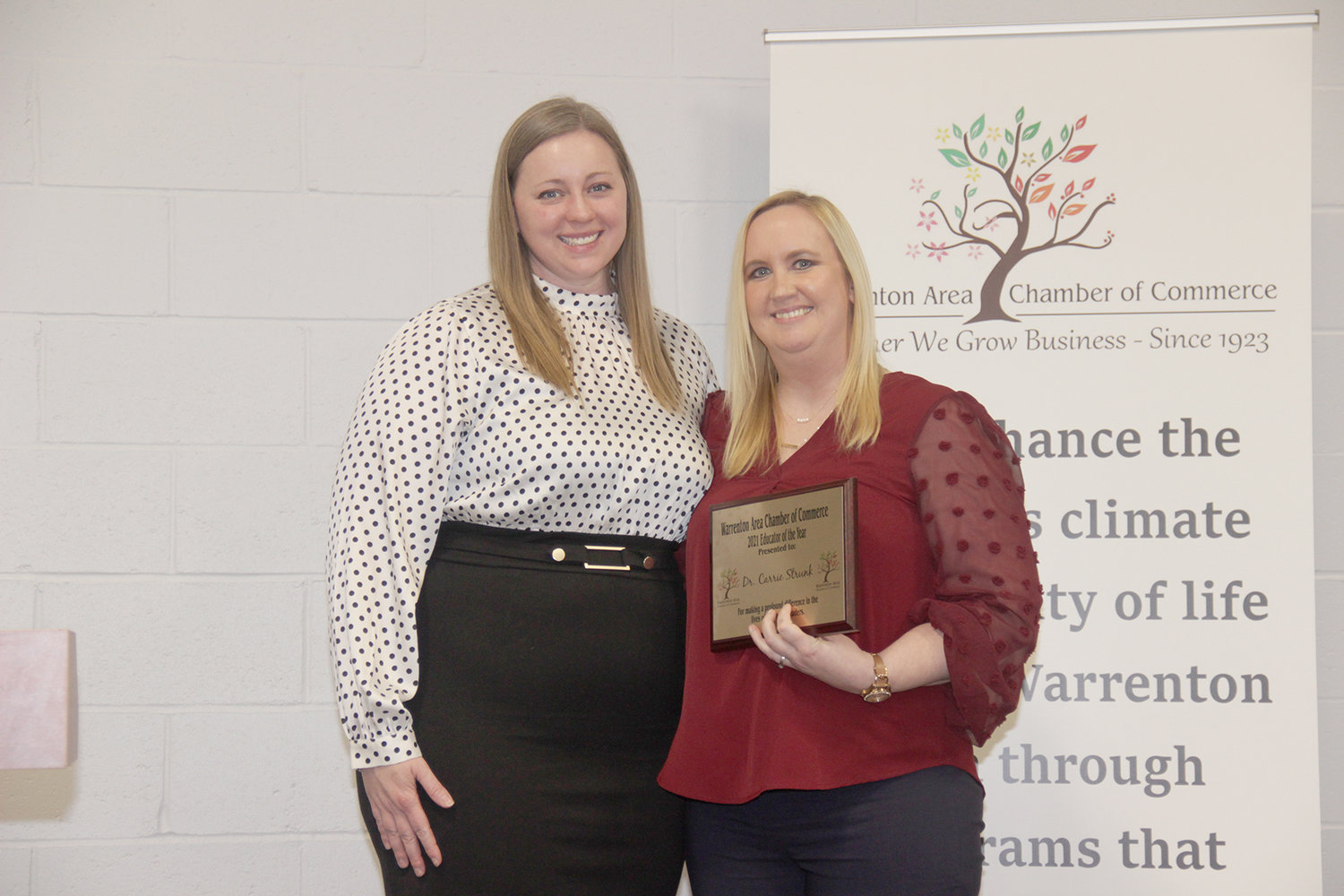 Five individuals and one business received the highest praise bestowed by the Warrenton Area Chamber of Commerce last week with the announcement of the Chamber’s six annual award recipients.

The honors were announced at the Chamber’s annual awards banquet, hosted Jan. 14 at the MaryLou Community Building in Truesdale. Winners in categories representing a range of business and public service fields were chosen from among nominees submitted by Chamber members.

During the banquet, the Chamber also hosted fundraising auctions that took in $4,900 for local student scholarships.

Business of the Year

The Chamber’s highest honor for a business this year went to Schraer Heating and Air Conditioning.

Event host Dan Dieckmann explained that the award goes to a business that is actively involved in supporting the community. The award was accepted by business owners Bill and Michelle Woolf and Gary Scott.

“The Scott and the Woolf families are truly the backbone of that company. And there is not an event or fundraiser that goes on in this county that those two families are not involved with or at,” said Dieckmann. “Throughout the years, the Woolfs and Scotts, along with many of their employees, have donated their time, energy and resources.”

“The community supports us, and we support the community,” commented Scott. “We just want to thank the community. This is just a great honor.”

Person of the Year

The award for Person of the Year went to Steve Etcher, a longtime economic development agent spearheading the Greater Warren County Economic Development Council. In 2021 he contributed to the achievement of getting a major beef processing company to announce a Warren County location.

“Steve has a way of bringing people together to solve problems,” commented Warrenton Chamber President Katie Joyce. “He’s able to help local businesses and governments work hand-in-hand to grow and benefit each other.”

Etcher said his three decades of helping economic growth in Warren County have been a rewarding career.

“By helping others, by pouring into your community and your neighbors, you really can have a blessed life, and that’s what I’ve had,” Etcher said.

The Alan Dreyer Memorial Ambassador Award goes to a person who is a consistent positive presence, inviting others to become more involved in community organizations. This year’s award went to Alouise Marschel, who Joyce described as an active participant in numerous community groups and a positive impact on many people throughout the years.

Volunteer of the Year

Penny McClain was awarded as Volunteer of the Year, earning recognition for her tireless work with various organizations, including American Cancer Society, Concerned Citizens for Animal Care, and the Warren County Literacy Program.

“I’m speechless. I’m overwhelmed. I really appreciate this,” McClain said. “I do what I need to do because I love animals and kids.”

Emergency Services Person of the Year

Earning the emergency services award this year was now-retired County Health Department Director Ruth Walters. She was recognized for steadily contributing to and helping guide the community’s response to the early months of the COVID pandemic.

“I am humbled and appreciative for this award. Working with all of those in the county and regional partners as well, and of course those that I have worked with in the health department, they work tirelessly and continue to do their jobs 24/7, day in and day out. They are the real heroes in my book,” Walters said.

Educator of the Year

Receiving the Educator of the Year award was Carrie Strunk, a curriculum coordinator with the Warren County R-III School District. She was recognized for helping configure school lesson plans to meet the many challenges of teaching during a pandemic, including adopting virtual learning platforms. Strunk credited the district’s teachers and other staff.

“Our district may be small, but we are mighty. I get to see that every day working with our amazing teachers, who put their students’ needs above their own” Strunk said.