This November, retired Fire Chief Jim Buescher is celebrating 50 years with the Marthasville Volunteer Fire Department, and hopes to spend many more years driving the big red fire trucks and … 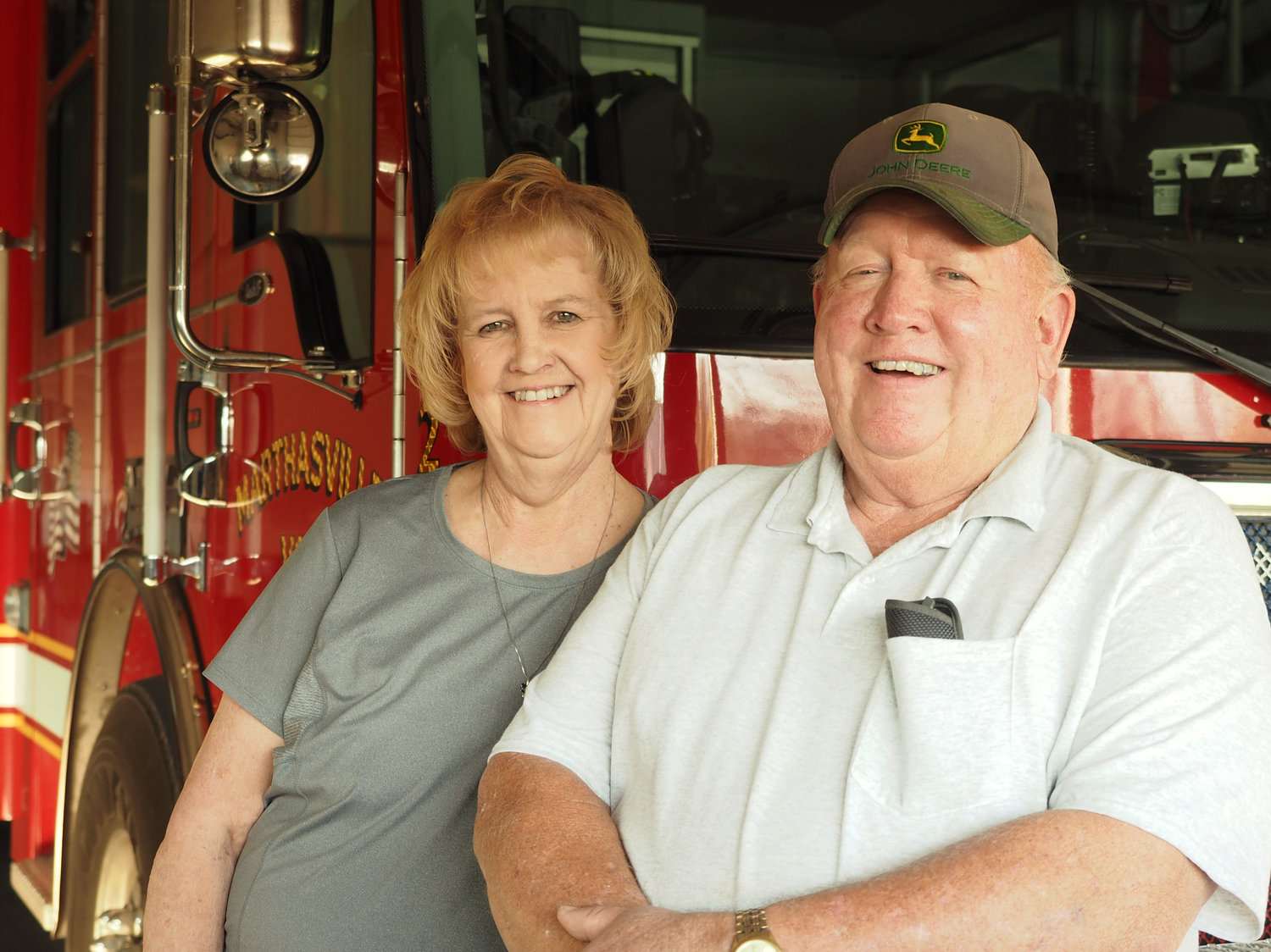 50 YEARS STRONG — Retired Fire Chief Jim Buescher and his wife Cindy are a unique couple, both serving the public in their roles as first responders. Jim Buescher recently celebrated 50 years with the Marthasville Fire Protection District (MFPD). He was honored by firefighters past and present during a celebration held Wednesday, Nov. 9 at Marthasville’s Station 1. Buescher continues to respond to calls with the MFPD and serves on the district Board of Directors.
Cindy Gladden photo 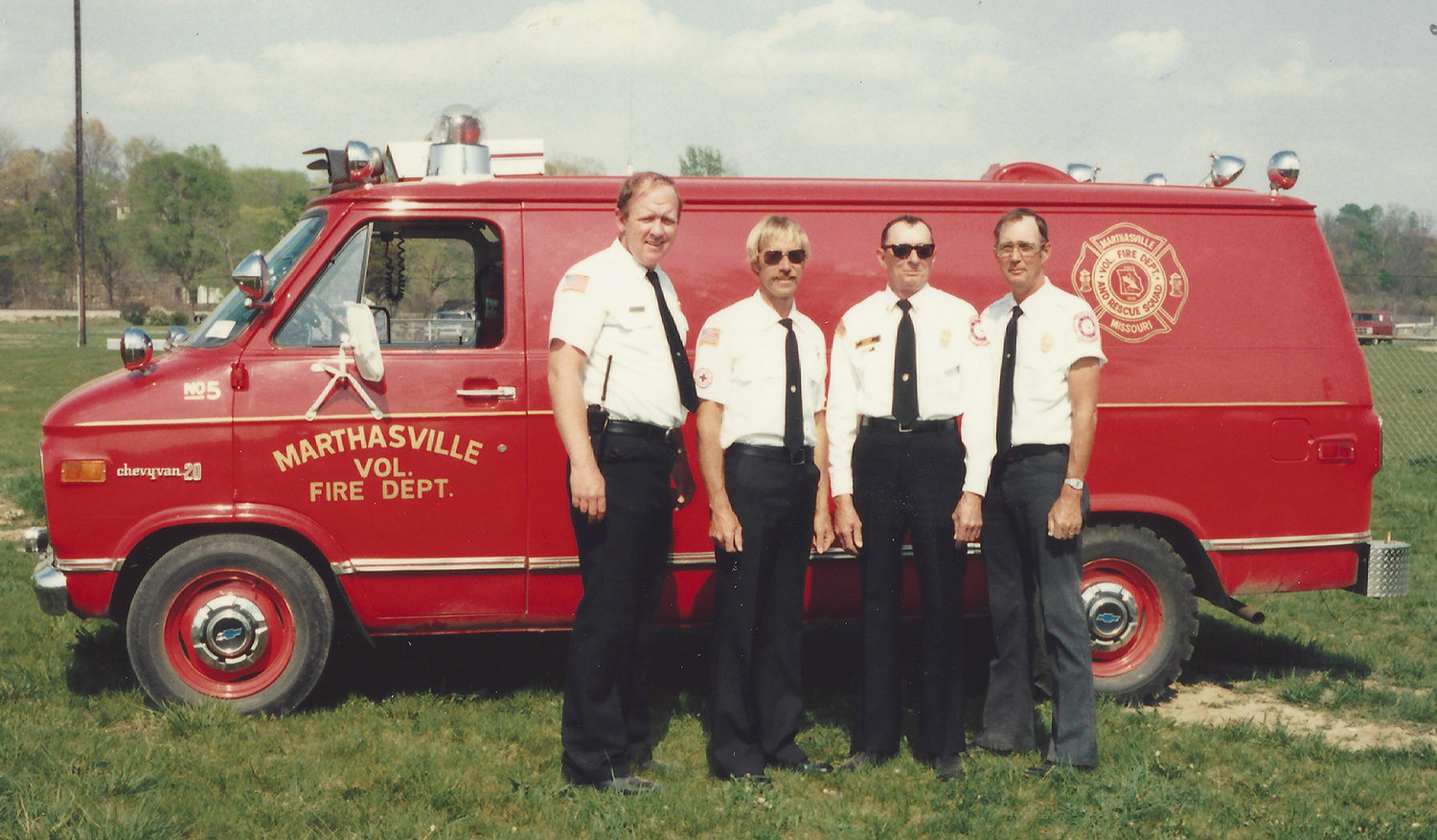 Buescher joined the department in 1972 as a young 18-year-old, following in the steps of his dad, Clinton “Dick” Buescher. He was allowed to go on calls when the senior firefighters gave him the go-ahead and “maybe got to load hose” as he watched the more seasoned firefighters.

“I thought I knew what I was doing early on until I started going to training,” Buescher laughed.

Buescher said the Washington Fire Department invited Marthasville firefighters to join them in first aid and auto extrication training while he was still a young firefighter. This was prior to being given the opportunity to participate in the standardized Firefighter 1 and 2 training, which is now mandatory to become a full-fledged member.

“Then I thought I had a pretty good idea of what was going on,” Buescher quipped.

Buescher met his wife, Cindy, at East Central College, where she was studying to be an EMT. Their marriage is unique. They are both first responders and understand what it means to get up from a hot meal, miss important events and respond at a moment’s notice. They are a great support for each other when the emergency response is tough. They both have seen things no one should see and understand it’s part of the job. They have their own private support team as a couple.

Cindy said she served as a dispatcher for the Marthasville fire department “way back” when fire phones existed. Ten phones existed in residences and businesses and were monitored by volunteers. Some of the businesses housing them included Driemeyer Motors and the MFA Elevator.

Later, she began a long career in dispatching with the Washington Police Department and retired after 49 years. Cindy still works as an EMT for Marthasville Community Ambulance District and has done that since 1976. Jim was employed by Franklin County Concrete, later Washington Redi-Mix, for 46 years while serving as a volunteer firefighter.

“He worked his way up through the ranks at Marthasville Fire,” said Cindy.

Buescher served as fire chief from 1987 to 1997. For ten years he has served on the Board of Directors for the Marthasville Fire Protection District (MFPD). He has seen a lot of growth, including the construction of the new Station 1 in Marthasville. Membership has grown from 30 to approximately 60 volunteer members.

“We always had nice stuff for the time,” said Buescher. “The trucks were adequate for what we needed. Our turnout gear was always the best stuff. The community has always provided what we need.”

Bill Halmich, retired chief from the Washington Fire Department, has had a long-standing relationship with Buescher and the MFPD and said both departments share a very similar strong work ethic.

“Our friendship goes pretty far back and continues today,” he said. “Jim can relate to people. Example is the best general order. He’ll be teaching the younger members. The way he will do that is by saying ‘keep an eye on me and that’s how you behave.’”

Bill Rombach, friend and fellow firefighter, also referred to Buescher’s sense of humor, recalling a few stories of Buescher as a smooth practical joker. One memory was of Jim repeatedly calling the phone of a neighboring firefighter each time his wife got to the clothesline, then hanging up when she went back in the house to answer the phone.

On a more serious note, Rombach said one of Buescher’s best assets is that he is patient with the rookies, not quick tempered. Buescher enjoys teaching the younger firefighters and has done a lot of it through the years.

MFPD volunteers all agree that Buescher is an expert when it comes to driving the department trucks. Because of his experience driving a concrete truck, the knowledge he gained is invaluable to teaching young firefighters to operate the MFPD vehicles. He understands how a vehicle will respond in different weather conditions and the type of roads traveled in the district.

He is knowledgeable about how the truck leans, how to brake it properly, and how the weight of the water and equipment can affect the performance of the vehicle. He shows the members why something works, is calm and patient with the new drivers.

Buescher said his hope and objective for the MFPD is to “keep on improving.” He has seen a lot of change in the 50 years he has “hung around the firehouse.” The department has trained swift water technicians and purchased a rescue boat and offers very consistent and critical training not only to the MFPD, but to neighboring agencies. State-of-the-art rescue equipment has been added thanks to community funding, and new ideas are being investigated, including adding a drone program.

A surprise party was held for Buescher Wednesday, Nov. 9, at Marthasville’s Station 1. Firefighters from his past and current members were all in attendance.

“I can run calls more now that I’m retired,” said Buescher. “There is still stuff I can do. I’ll run for a little while yet. You know I do it because I love it.”