With Wright City trailing conference foe Van Far in the fourth quarter, Duan McRoberts broke multiple tackles on a 60-yard touchdown run to help put Wright City on top, a lead they would not … 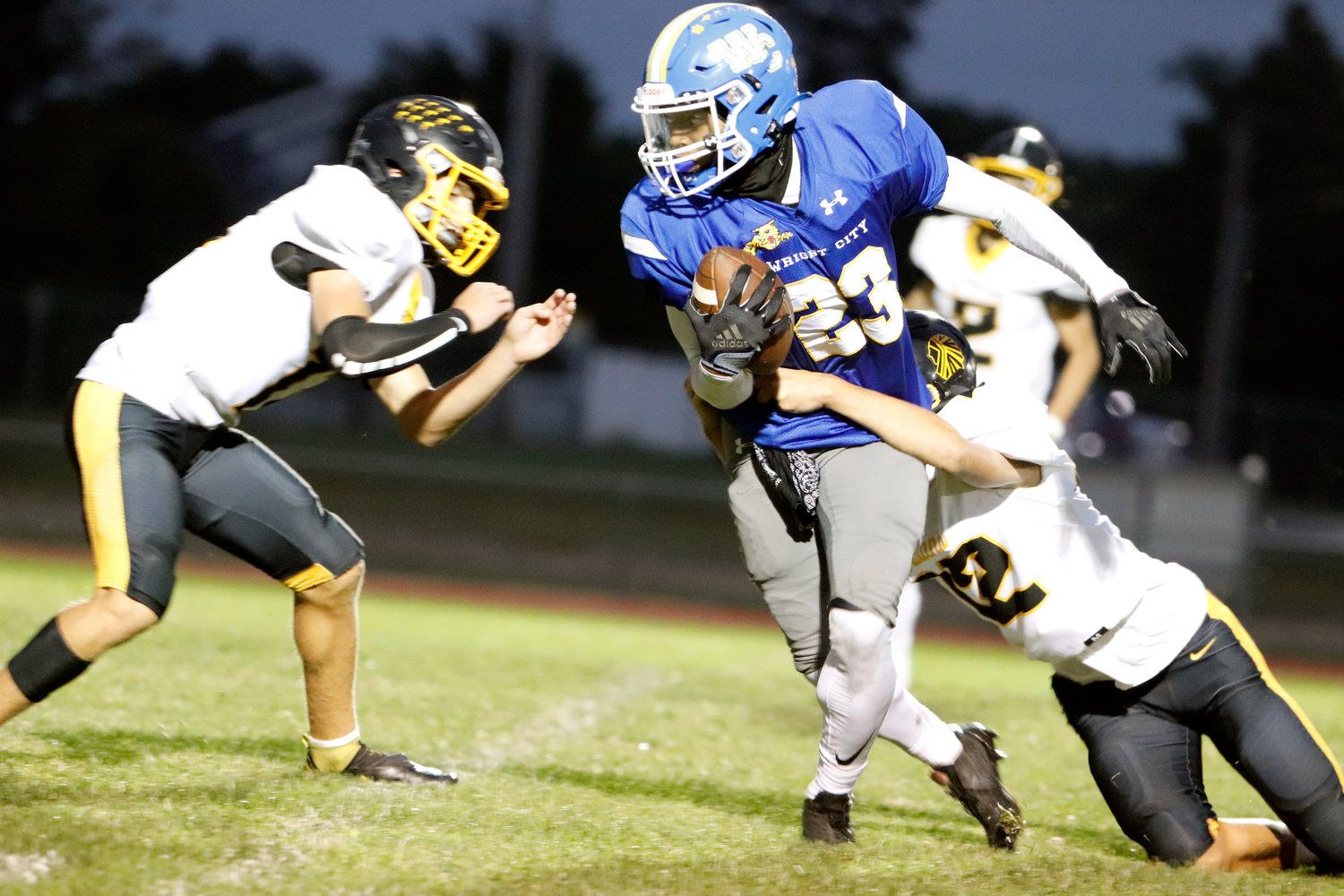 Jeremiah Davis attempts to break a tackle during the first half of Friday’s game.
John Rohlf photo 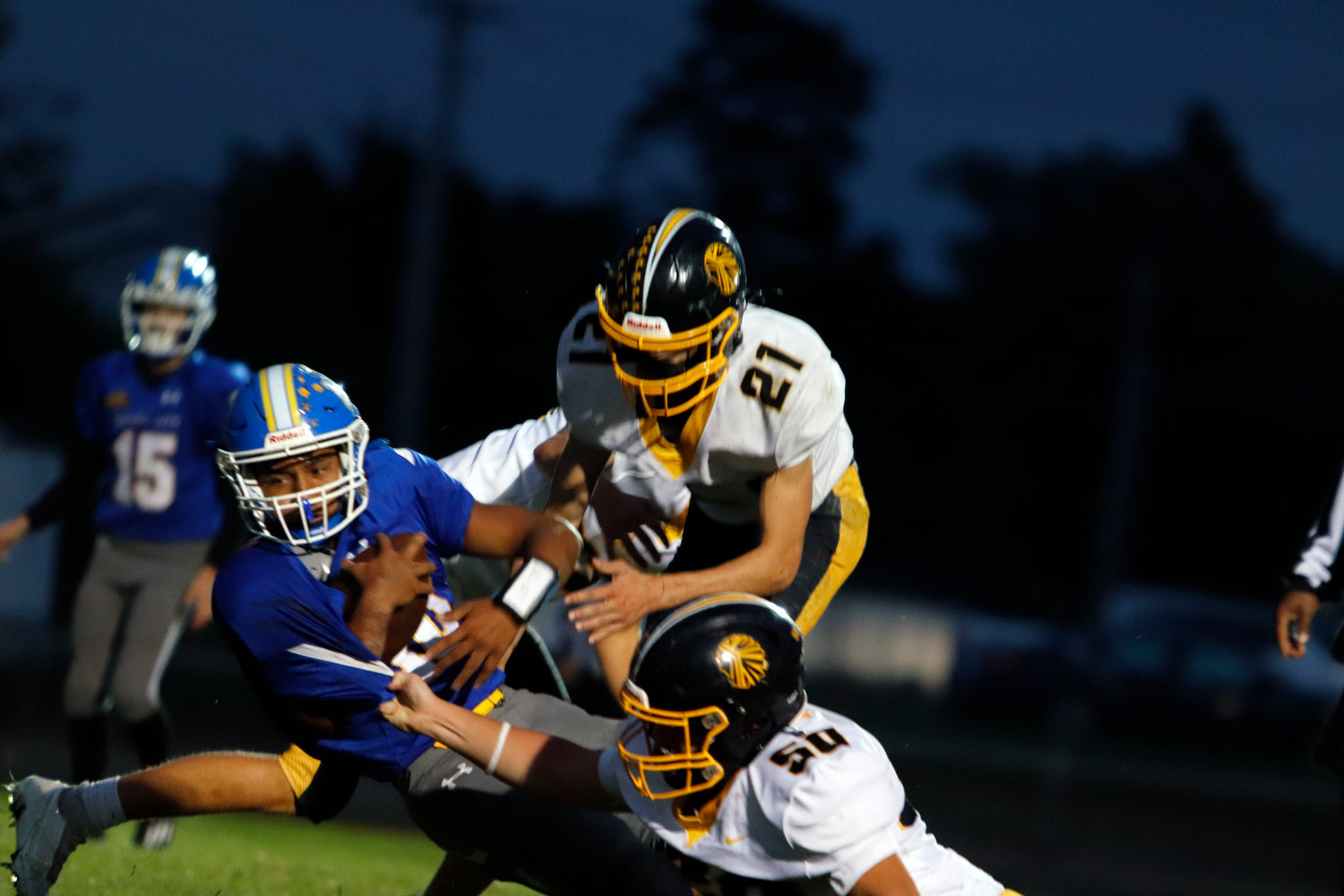 With Wright City trailing conference foe Van Far in the fourth quarter, Duan McRoberts broke multiple tackles on a 60-yard touchdown run to help put Wright City on top, a lead they would not relinquish in their 41-28 win Friday night.
McRoberts rushed for 317 yards and scored four touchdowns, including two in the fourth quarter, to help Wright City (4-1) win their fourth game of the year. McRoberts rushed for a 60-yard touchdown on third-and-five with Wright City trailing Van Far 28-26 with just over 7 minutes left in the game.
“They called a run up the middle,” McRoberts said. “I just I kind of saw an opening. They tried to tackle me. Just kind of bounced off. I just do what I usually do and then I ended up breaking free and they couldn’t catch me.”
Van Far took over at their own 42 yard line with 7:02 remaining. They converted a third down and drove down to the Wright City 29-yard-line. Wright City stopped Van Far on a fourth-and-four to take possession on the 26-yard-line.
McRoberts got the carry on Wright City’s first play from scrimmage and took it 74 yards for a touchdown to put the Wildcats up 41-28. McRoberts credited receiver Nate Womack for his block in the secondary to spring McRoberts free for the game clinching touchdown.
“After I got to the secondary, I broke one tackle from the linebacker,” McRoberts said. “I think it was the DB (defensive back), he tried to get me. Nate Womack he gave me a good just a little push block on them. Gave me some open space and I do my best with open space.”
After a 13-0 first quarter lead turned into a 22-19 halftime deficit, the Wildcats focused on establishing the run in the second half. Wright City coach Tyler Rickard said the Wildcats thought they had an advantage on the offensive line. He said both touchdown runs, especially the 60-yard run to put the Wildcats up in the fourth quarter, were big plays to help Wright City reclaim the momentum.
“He’s proven over and over since he’s stepped onto the varsity team last year that he’s a reliable player,” Rickard said. “In a situation like that, if you just get him the ball and give him a little wiggle room, he’s going to make good things happen for you.”
Wright City jumped out to an early lead in the game. Joey Gendron threw a 60-yard touchdown pass to Jeremiah Davis on the first play from scrimmage to give Wright City the early lead. McRoberts scored on a 7-yard touchdown run later in the first quarter to give the Wildcats a 13-0 lead. Van Far converted a turnover into points late in the first quarter. Wright City answered with a 31-yard catch and run by Womack to give Wright City a 19-8 lead. Van Far scored the last two touchdowns of the half, including a score with 50 seconds left in the first half.
The Van Far triple option offense created some challenges for the Wildcat defense. Wright City knew the offensive style was coming. Rickard said they just did not execute on the edge but made some key stops late in the game.
“We wanted to force the pitch and we just didn’t rally to the pitch like we thought we would,” Rickard said. “And so we had to make some adjustments because if we got to the pitch, then they’re hitting the dive back. And so we had to make some adjustments there in the fourth quarter and we were able to get some stops that obviously made the big difference.”
Rickard stressed to the Wildcats the importance of executing in the second half.
McRoberts said even though there was some frustration at halftime, the Wildcats were optimistic they would win the game.
“Everybody at first was a little upset because we were up,” McRoberts said. “We knew we could play better but we knew that this was still our game. Our goal every week go 1-0 and give it our best and that’s what we did. We battled through a lot of adversity.”
While Rickard did not like the Wildcats’ execution at points of the game, he liked how they battled through adversity to earn another win. Rickard was proud Wright City found a way to win, while also stressing there are things to work on moving forward.
“It’s something we’ve been harping on since last year is that we can’t allow a little adversity to put us out of our game,” Rickard said. “It’s encouraging to see some maturity and growth that even when we’re not playing our best football and things are not going our way that we can still find a way to win.”
Wright City will play at Montgomery County Friday in a conference matchup. The game is scheduled to begin at 7 p.m.