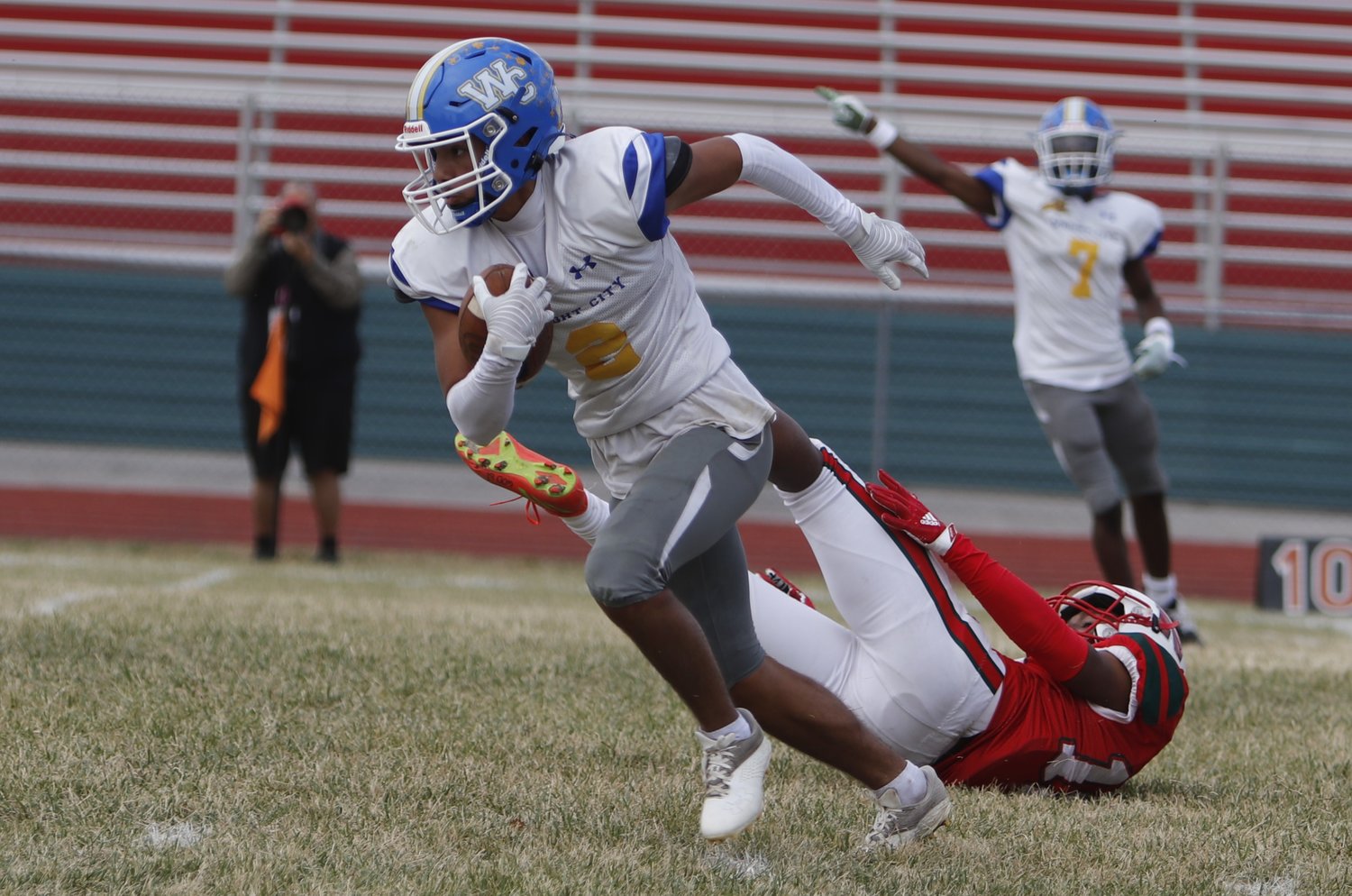 Nate Womack runs towards the Normandy end zone after recording an interception in the first half of Saturday’s district quarterfinal game.
John Rohlf photo 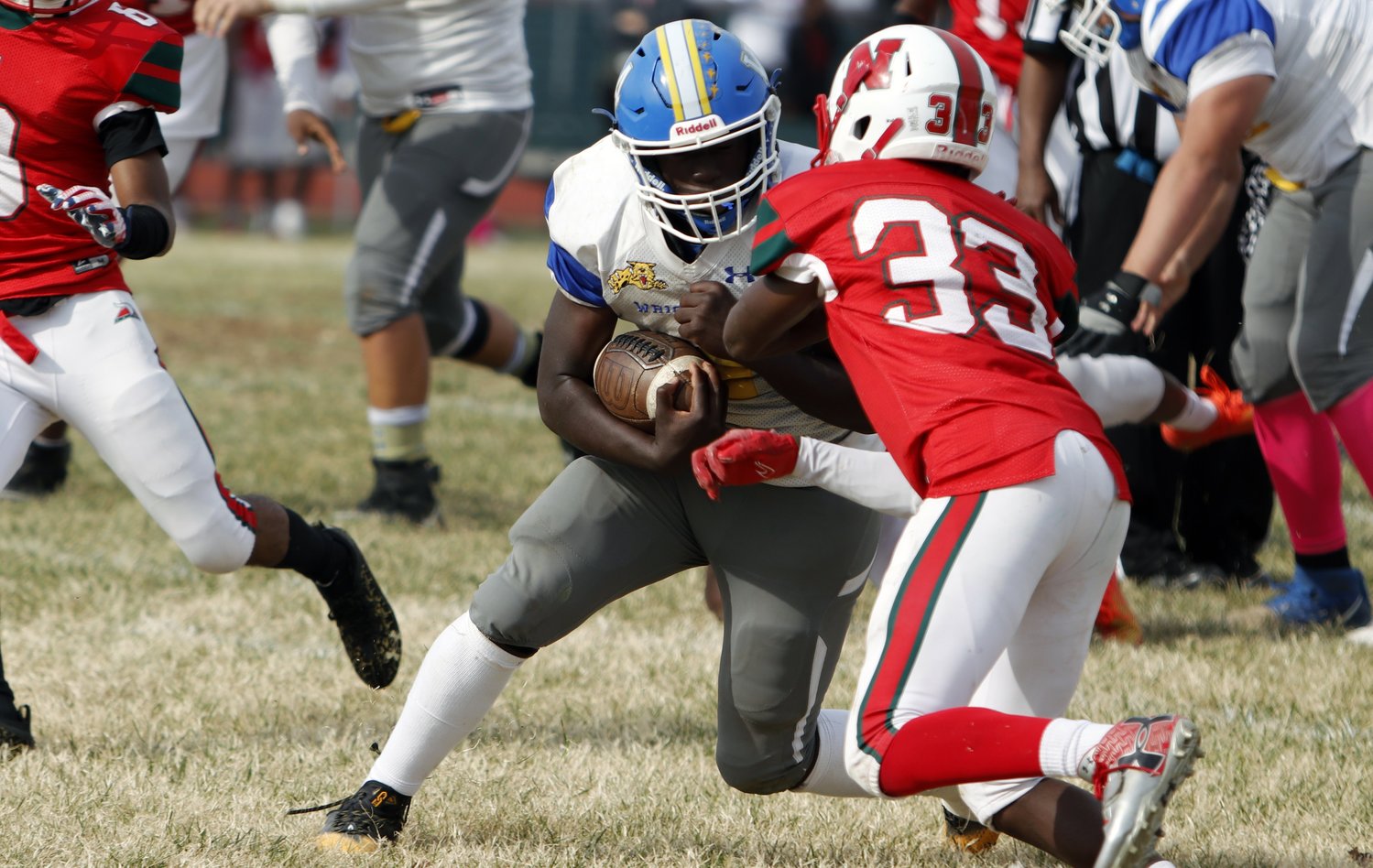 Wright City (5-5) beat Normandy 42-32 in the first round of the Class 3, District 3 tournament Saturday at Normandy High School.

Wright City scored a pair of fourth quarter touchdowns to win their first game in over a month.

“Just such a gutsy performance by everybody,” Wright City football coach Tyler Rickard said. “It was an up and down game, which we knew it would be.”

After neither team scored in the first quarter, both teams scored three touchdowns in the second quarter. Wright City opened the scoring on Joey Gendron’s 6-yard touchdown pass to Kayden Allison. Nate Womack’s interception set up the score. After Normandy responded with a touchdown to take an 8-6 lead with over seven minutes left in the half, Wright City responded less than a minute later to regain the lead. Duan McRoberts returned the ensuing kickoff to the 13-yard line. On the first play from scrimmage, Carleon Jones scored on a 13-yard rushing touchdown to give the Wildcats a 12-8 lead. Wright City added another touchdown with over two minutes remaining in the half on Gendron’s 64-yard touchdown pass to senior wide receiver Jeremiah Davis.

“I heard my boy Nate (Womack) yelling throw it here, throw it here,” Davis said. “I saw the corner come up. And I just took off. The safety wasn’t ready. I just knew I got that. I saw the ball. Perfect placement. Touchdown.”

The Vikings scored two touchdowns late in the quarter to take a 24-20 lead into the half. Normandy scored an offensive touchdown with 36 seconds left. With 15 seconds left, they intercepted a pass and returned it for a touchdown.

“It was so huge,” Rickard said. “Probably got a little too aggressive there at the end of the first half being up and getting the ball. Our guys picked us back up right there and made some plays. That was huge just to get some momentum.”

Normandy regained the lead less than a minute into the fourth quarter. They led 32-28 with 11:11 remaining in the game. Wright City responded with a pair of touchdown drives to clinch the win. Jones scored on another 13-yard rushing touchdown with just under nine minutes left to give Wright City a 35-32 lead. After Gendron intercepted a Viking pass with over six minutes remaining, McRoberts scored on a 7-yard touchdown run with 1:59 remaining to give the Wildcats a two-score lead. McRoberts ran for four yards on a 4th and 1 with just under three minutes left to extend the drive.

“Our mindset is what carried us through this game,” Davis said. “Especially that last drive right there.”

“We pride ourselves on keeping our foot on the gas,” senior Nate Womack said. “Give our 100. So us going 5-0 and then getting punched in the mouth and having to restart all over. We got knocked down. We just got to show how fast we can get back up.”

Rickard credited the Wildcat players for their perseverance through the losing streak. Although it was a tough four weeks, the players kept pushing and came to practice ready to play. They were aggressive and hungry looking towards their next game throughout the losing streak, he said.

Rickard believes there was added urgency Saturday, with the Wildcats’ season on the line.

“I just think it gave our kids a sense of urgency and a sense of never give up,” Rickard said. “They knew they were playing for their football lives. Our seven seniors had one guaranteed game. And so I think everybody was playing for them. Because they want to give them another week. And those guys deserve it. They’ve been awesome. I think that kind of emotion and feeling is what spurred us in that second half to really get going.”

Davis and McRoberts both registered over 100 all purpose yards in the win. McRoberts rushed for 112 yards and one touchdown. Davis had 75 yards receiving and a touchdown. He added 32 yards rushing. Gendron threw for 124 yards and two touchdowns. Jones led the Wildcat defense with five tackles and 10 assists.

Womack expressed confidence the Wildcat coaching staff will have the Wildcats ready to compete against the Warriors Friday night.