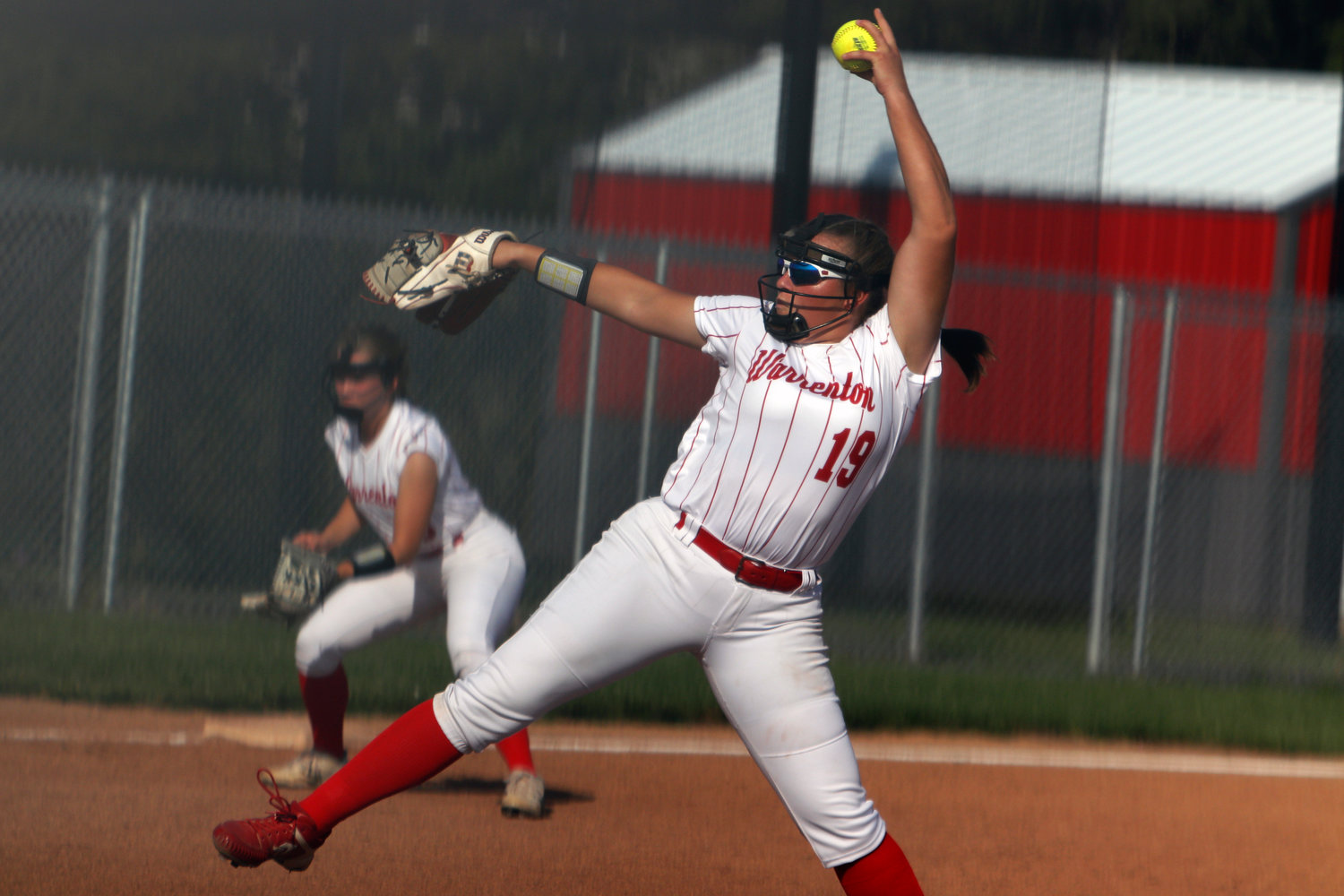 The Warrenton Lady Warrior softball team used a big fifth inning to beat conference foe Winfield last week.
Warrenton (8-5) beat Winfield (11-7) 7-2 last week on senior night to avenge a loss to Winfield earlier in the season. Warrenton jumped out to a 7-0 lead in the game, keyed by a four-run fifth inning. They faced Winfield pitcher Emma Dixon, who struck out 14 Warrenton batters in the team’s first matchup earlier this season.
“Winfield is a good team,” Warrenton softball coach Chad Berrey said. “They have beat some really good teams and they are very deep at all positions. It was a great feeling coming back winning when we lost to them earlier this season.”
The Lady Warriors overcame what Berrey described as Warrenton’s worst pregame in a long time. With the pregame performance, Berrey was not optimistic prior to first pitch about Warrenton’s chances in the game. Berrey credited captains Mackenzie Hurst and Sam Eskew for bringing the team together and redirecting the ship.
“There is a reason why these two are our captains,” Berrey said. “They were able to lock in our girls and we started firing on all cylinders. Kylie (Witthaus) was Kylie, she kept their offense at bay from the start.”
Warrenton opened the scoring in the second inning. They plated a run on Caydyence Haverfield’s RBI single to knock in Audrey Lanzone, who doubled earlier in the inning.
Warrenton was able to escape a threat in the top of the third inning. A Winfield runner reached third base with no outs. Three pitches later, Winfield attempted to score on a passed ball. Warrenton catcher Maddisyn Hoelscher recovered and threw to Witthaus at home plate, who tagged the runner out to escape the jam. Berrey thought the play was a big moment in the game.
“At that moment, I felt the same team energy as we had last year as we were in the hunt for a district title,” Berrey said.
Hoelscher also caught a runner attempting to steal second base in the fourth inning. Berrey believes these plays drove Warrenton’s energy throughout the game.
Warrenton used three home runs to claim a 7-0 lead. Witthaus hit two home runs and Hurst hit her first home run of the season on senior night. Hurst is the lone senior on Warrenton’s team this season.
On the mound, Witthaus struck out 13 Winfield batters in the win.
“Kylie told us that she felt great after she warmed up and she looked as good as ever,” Berrey said. “She struck out 13 and kept the hitters off balance all game. She was poised when we had runners in scoring position or when we got behind in a count. Her maturity as a pitcher really shined yesterday.”
Warrenton pushed their winning streak to three games with a 6-2 win over Montgomery County Monday. Witthaus went 4-4 with two doubles and three RBIs. Kiera Daniel had two hits and three runs scored. Rose Renshaw had one hit and two RBIs.
Witthaus earned the win on the mound. She struck out 15 Montgomery County batters in the win.
Warrenton is scheduled to host St. Charles at 4:15 p.m. this Thursday.