The Warrenton Warriors took an early lead and did not look back in their district quarterfinal win over North Point last week. 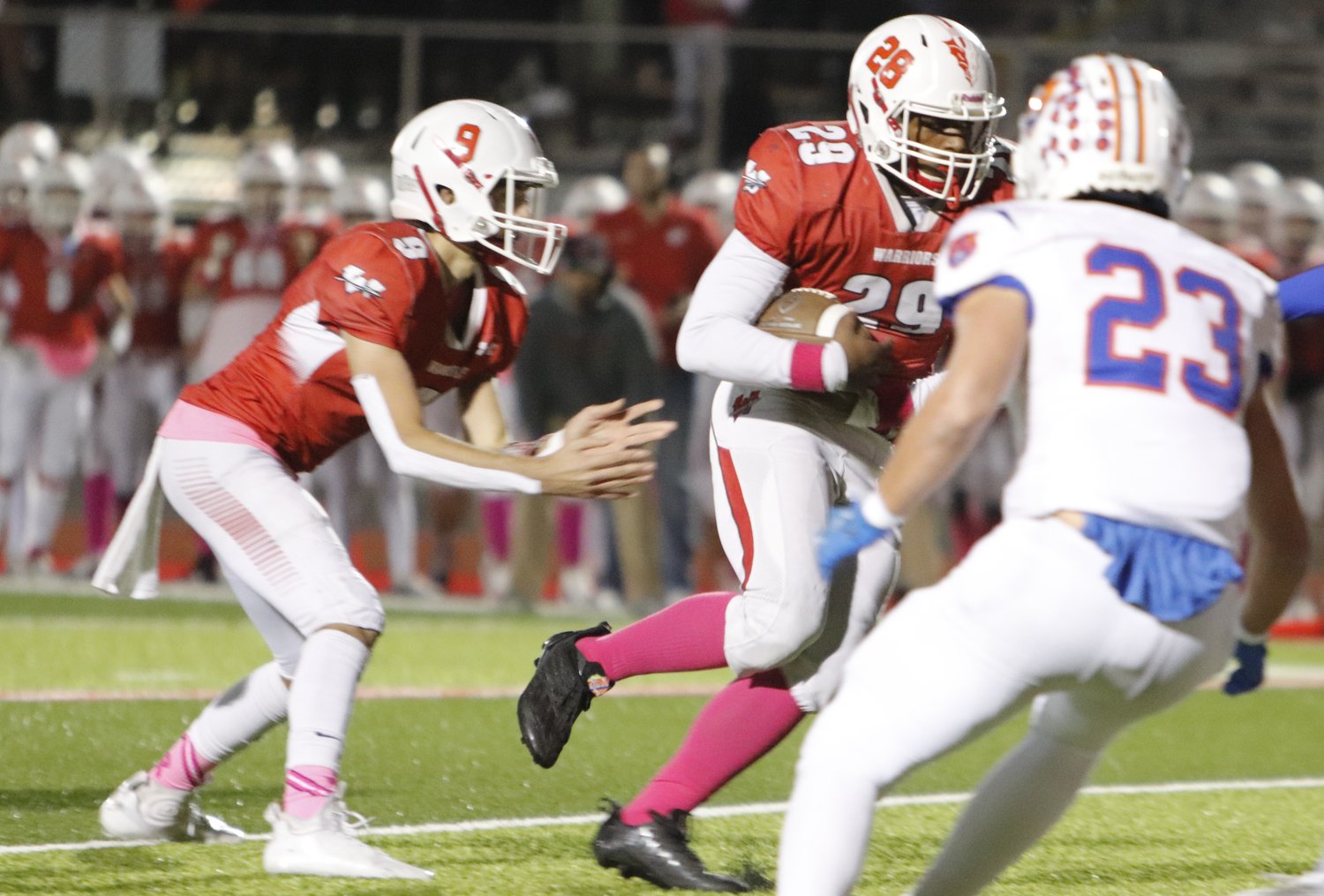 Elias McPike carries the ball on his touchdown run in the first half of last week’s district quarterfinal win over North Point.
John Rohlf photo 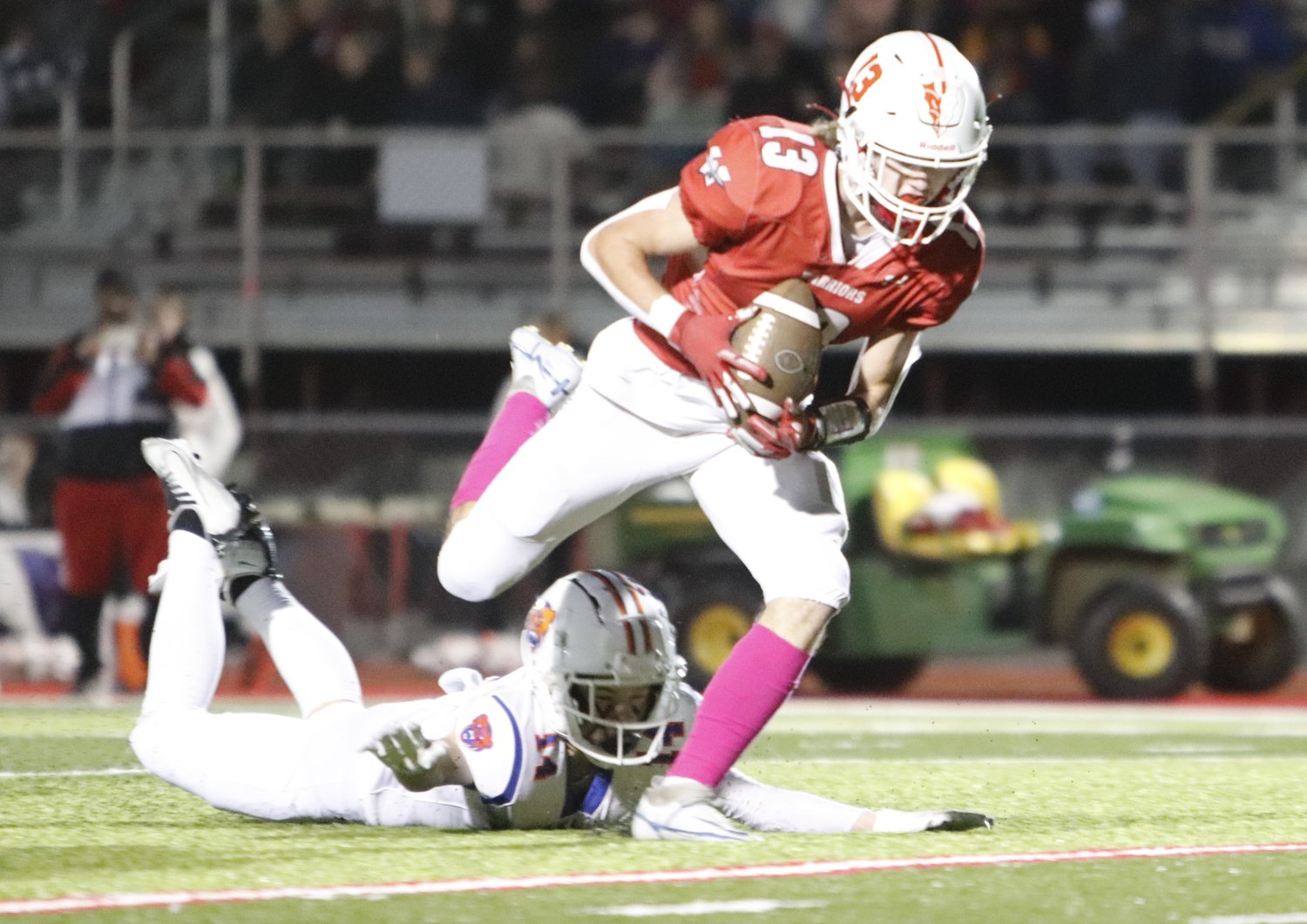 The Warrenton Warriors took an early lead and did not look back in their district quarterfinal win over North Point last week.

Warrenton (4-6) beat North Point 33-25 in the first round of the Class 4, District 5 tournament. Warrenton will travel to Hannibal (7-2) this week to play the Pirates in the district semifinals.

Warrenton got off to an early 14-0 lead after two offensive possessions. Quarterback Charlie Blondin threw a long touchdown pass to Mason Thompson on Warrenton’s first possession of the game to give Warrenton an early 7-0 lead. After the Warrenton defense stopped the Grizzlies on their second possession, Warrenton put together another touchdown drive to claim a 14-0 lead. Blondin hit Colton Brosenne on a pass to the 10-yard line to set up Elias McPike’s 10-yard rushing touchdown.

The Warriors scored two more first half touchdowns to lead 26-13 at halftime. Blondin threw a 53-yard touchdown to Brosenne. Running back Austin Haas scored on a 2-yard rushing touchdown with less than a minute left in the first half.

“We couldn’t have played much better offensively. In the first half, especially,” Warrenton football coach Jason Koper said. “We were four for four on touchdowns. We didn’t go into the game trying to hit those deep passes but they were open. Charlie threw great balls and Colton and Thompson went out and caught them right away.”

North Point trimmed the Warrenton lead to 26-19 early in the third quarter. North Point started the half with an onside kick and recovered the ball to start the half on offense.

North Point converted a pair of red zone fourth downs to score a touchdown on their opening drive of the half. Quarterback Gregory Hoyt threw a touchdown pass to Trey Trennepohl in the back corner of the end zone to trim the Warrenton lead to seven points.

Warrenton responded with a touchdown on their first offensive possession of the second half. Haas scored his second touchdown of the game on a 2-yard touchdown run on 3rd and goal. The touchdown gave Warrenton a 33-19 lead they carried into the final quarter.

“A couple times this year, we’ve had the chance to make drives like that and we’ve been unsuccessful,” Koper said. “At that moment, to go take care of that, go score. That’s the growth that I’ve been looking for and it was huge for us tonight.”

With North Point driving in Warrior territory early in the fourth quarter, Warrenton junior lineman Cameron Faerber sustained an injury that caused a lengthy delay. When play resumed, the Warrenton defense stopped the Grizzlies on fourth down. The fourth down stop came one play after Hoyt’s fourth down rushing touchdown was taken off the board because of a holding penalty.

Hoyt scored later in the quarter on a 15-yard rushing touchdown with just over three minutes left to trim the Warrenton lead to eight points. Warrenton converted multiple first downs, including a 4th and 1, to run out the clock and clinch the win.

Koper was proud how the Warriors finished off the game after Faerber’s injury.

“I was just glad the team stepped up for him to finish off,” Koper said. “That’s been on my mind since that happened. I was proud of our guys for stepping up and finishing the game up. That’s the family atmosphere that we’ve been trying to take care of. So that made me very happy.”

“It’s going to be a tough game this week going up to Hannibal,” Koper said. “That’s a pretty good road trip there. We’ve got to execute better. They’re going to be a good team and hopefully we have a good week of practice and get after them.”

Friday’s game will be played at 7 p.m. Friday at Hannibal High School.