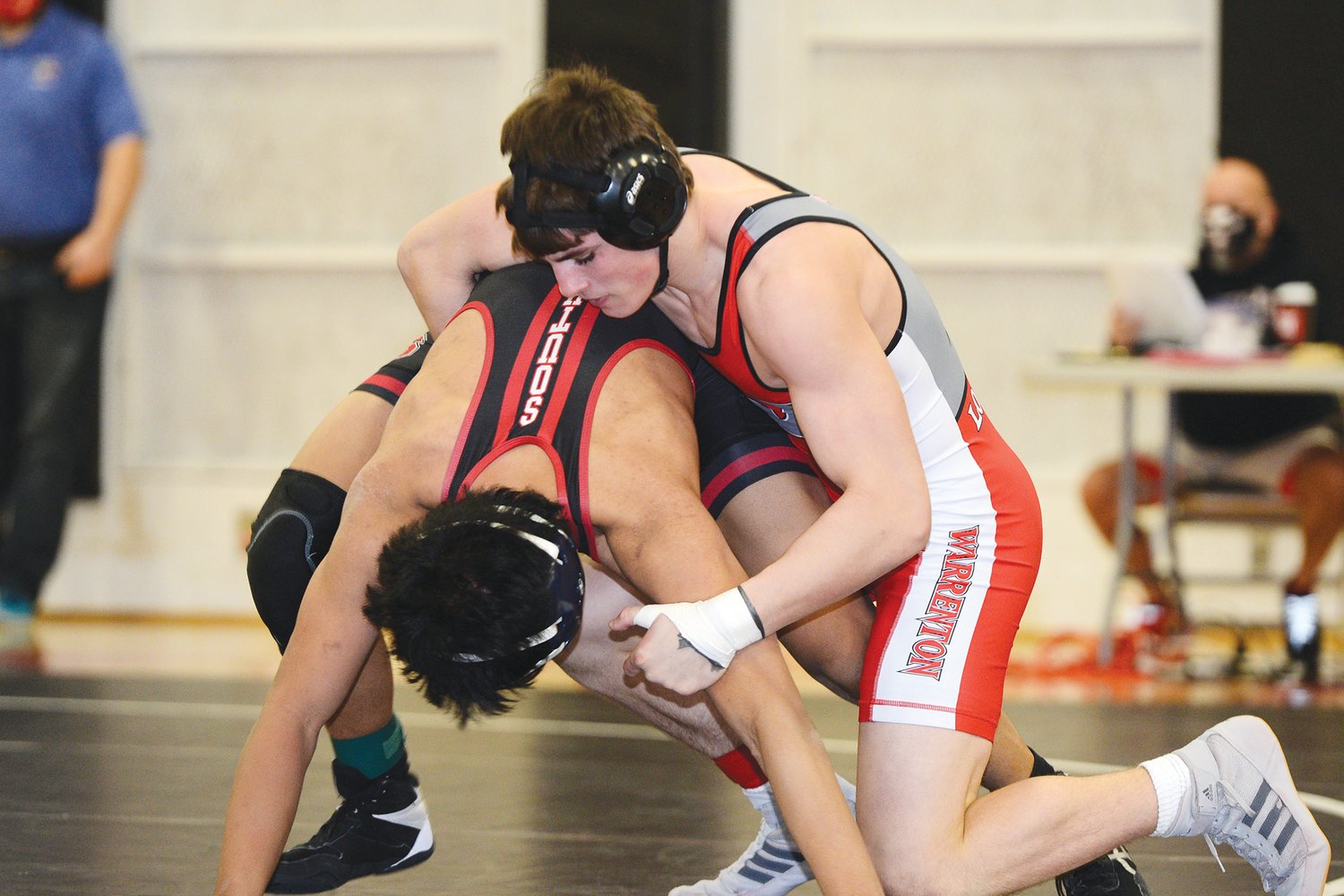 STATE BOUND — Warrenton’s Anthony Lombardo, right, qualified for state by finishing in the top three at Saturday’s sectional meet at 152 pounds. Lombardo was the lone wrestler for the Warriors to advance to state as four other grapplers placed fourth. Bill Barrett photo.
Posted Thursday, March 4, 2021 2:43 pm

The Warrenton wrestling team will be sending one grappler to the Class 3 state meet later this month and narrowly missed bringing a larger group as four others finished one spot shy from advancing.

The top three finishers in each weight class advance to state, which will be held March 12 in Independence.

Competing at 152 pounds, Lombardo won two of his three matches. He opened the tourney by pinning Jordan Fellner and beating Whitfield’s Caiden Gagliano by a 6-4 decision.

In the title match, Lombardo lost a 3-2 decision to Evan Longer of Fort Zumwalt East.

Competing in the third-place match, four Warrenton wrestlers finished one win shy of a state berth.

Joshua Kassing won one of his three matches at 106 pounds, while Levi Penrod lost both of his contested matches at 145.

At 170 and 285, respectively, Andrew Sommers and Josh Napier each won two of their four matches.

Also competing at sectionals for Warrenton were Anthony Edison (120 pounds) and Kyler Flowers (195).

Wright City had two wrestlers compete at the Class 2 sectionals Saturday and one also finished just shy qualifying for state.

David Riggs won one of three matches at 120 pounds. His final loss came in the third-place match in a 7-2 decision to Kade Scheer of Southern Boone.

“Going into Saturday we knew it would be tough for David to qualify,” Wright City Coach Billy Garrett said. “His weight had three other quality wrestlers that he had lost to throughout the season.  In the third-place match it was his fourth time wrestling the Southern Boone wrestler, and by far his best performance against him. Any other year his performance would have qualified for state, but this year they had to reduce the number of qualifiers.”

Also competing for the Wildcats was Riley Shive at 285. He lost both of his matches.

“Riley had a couple tough losses Saturday,” Garrett said. “In his first match he was up 8-1, then got caught in a throw and pinned.  Then in his second loss he was up 2-1 and got a penalty to tie the match with 4 seconds left and ended up losing in the tiebreaker round. “

Garrett said the sectional experience will pay off for both grapplers next season.

“Both David and Riley wrestled tough Saturday and with our entire lineup being underclassmen, we should come into next season with more experience and drive in the room,” he said.