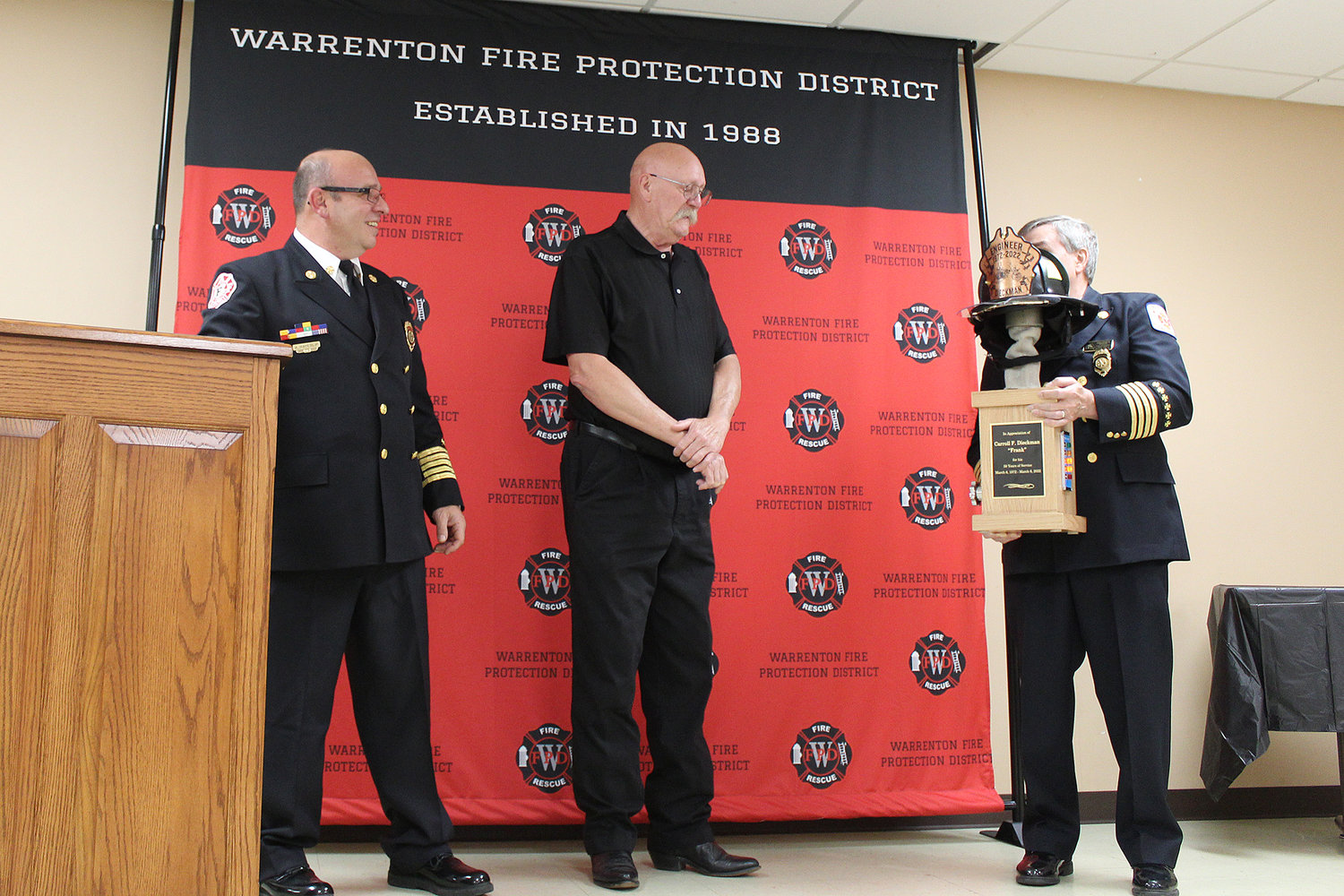 This year marks a milestone in local emergency service that Warrenton firefighters wonder if they’ll see again in their lifetime: volunteer firefighter Frank Dieckman has been responding to emergencies for 50 years.

Dieckman, an engineer tasked with operating firetruck equipment on calls, was presented with a custom-crafted service award during Warrenton Fire Protection District’s annual awards ceremony July 29. Fire Chief Anthony Hayeslip said it was a moment of recognition for a rare person willing to offer five decades of volunteer service.

“He’s always been there. He’d do anything, anytime,” Hayeslip said. “Even when he was working, he was giving all the time he had. He had family of his own, but he kept with it. ... You don’t have people like that anymore.”

Dieckman was recruited to join the fire district in 1972 when he was 24 years old. To say that he’s seen a lot of changes over the years would be an understatement. At the time, the only way the all-volunteer department knew to report to the fire station was a single siren in downtown Warrenton.

In the decades since Dieckman began his service, the clothing that firefighters wear, the equipment they carry, and the trucks they operate have all advanced significantly. Networked phones, and later wireless pagers, were “high class” developments, he noted.

The training for firefighters has also become much more elaborate as fire departments evolved into all-purpose rescue agencies, and also adapted to building fires that are much more dangerous than they used to be, Dieckman said.

“House fires are so different now. The materials the house is built with used to be all dimensional lumber. No plywood or OSB board, which are full of sawdust and glue. The materials in the house, your furnishing, was all natural materials,” Dieckman explained.

Now, he said, homes are full of plastics and adhesives that become flammable when exposed to high heat — materials that firefighters refer to as ‘solid gasoline.’ That’s cut the time to safely escape a house fire from 17 minutes to 3 minutes.

To stick around while the nature of the service, the equipment, the training, and the dangers they faced are all changing, Dieckman said firefighters have to be willing to constantly adapt and motivated to serve their community.

“You gotta be stubborn. It gets in your blood,” he commented. “It’s worth it to be helping someone. For me, it’s giving back to the community. On a house fire, helping someone who’s having the worst day of their life.”

But even on the many days when there weren’t emergencies, Dieckman said he found something important at the firehouse: a camaraderie, a brotherhood among those who had chosen this line of service.

“It’s family. ... I feel the brotherhood of the fire department has to be the best above all others,” he said. When a firefighter is injured or killed on duty, no matter where they are, firefighters from throughout the region and across the nation will turn out to honor their service and console those they left behind, Dieckman said.

Over his 50 years of service, Dieckman has seen 10 prior fire chiefs come and go, and is planning to outlast the 11th, Hayeslip.

“I figure he’s going to retire in a few years,” Dieckman speculated, “and I figure I’ll probably give it up when I die.”

And even after 50 years, he said there are still parts of running fire calls that are exciting.

“I hate the frickin’ noise from the sirens. After a while, that gets old,” he noted dryly. “But it is the coolest job in the world.”