It’s been many years since Orville and Vincent Ruether wore the uniforms of active duty military men. But with a recent trip to the heart of military honors and memory in Washington, D.C., they … 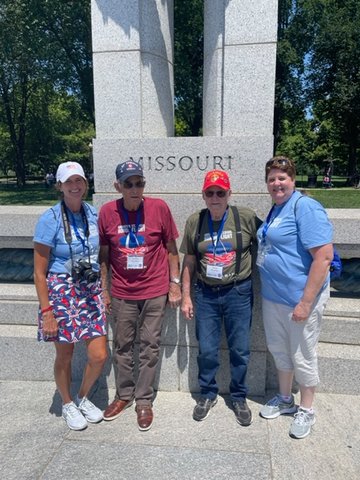 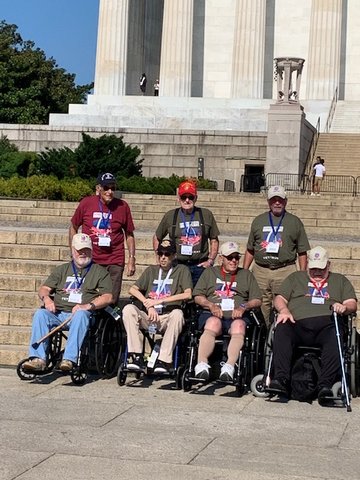 VISIT TO WASHINGTON — St. Louis-area veterans on an honor flight trip to Washington, D.C., stop for a photo during a visit to the Lincoln Memorial.
Submitted photo 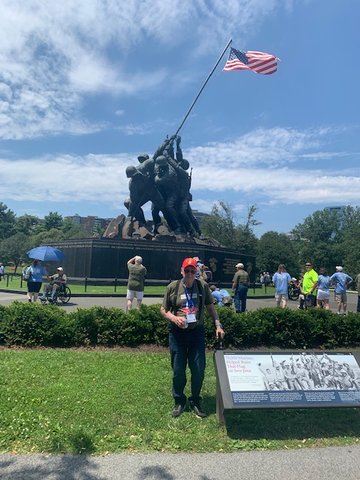 It’s been many years since Orville and Vincent Ruether wore the uniforms of active duty military men. But with a recent trip to the heart of military honors and memory in Washington, D.C., they were reassured that those who gave years of their lives to serve their nation haven’t been forgotten.

Orville, 88, and Vincent, 85, were among a group of St. Louis-area military veterans who were taken for a guided visit to the capitol on July 12 by Greater St. Louis Honor Flight, a nonprofit organization which aims to ensure older veterans have a chance to experience the memorials built in their honor. One-day, round trip visits to as many Washington monuments as possible are provided to veterans and accompanying guardians free of charge.

The Ruether brothers, who come from a family of military men, said the trip was a meaningful, and at times humbling, experience. Orville Ruether served in the Army’s 82nd Airborne Division from 1953-1955, stationed at several domestic military bases. Vincent Ruether served from 1956-1958 as a Marine stationed in Iwakuni, Japan.

Neither was deployed to combat, and so at times have felt unworthy of recognition. The honor flight was a day to acknowledge that their service also mattered.

“I was pretty honored to go on the flight. I thought it was pretty neat,” commented Orville.

Vincent said he was grateful for the opportunity to meet and learn about the other veterans on the trip, many of whom served during the Vietnam War era.

“With all the veterans there, you got more handshakes and ‘Semper Fi’ than a man can explain,” laughed Vincent, referring to the Marine Corps’ motto, which means “Ever Faithful.”

While in Washington, the group visited memorials for veterans of World War II, Korea and Vietnam, as well as the Tomb of the Unknown Soldier and Arlington National Cemetery, where members of the military have been buried since the American Civil War.

“I thought the Iwo Jima monument was great, being as I was in the Marine Corps,” Vincent noted. He also said that seeing the sheer number of military buried in Arlington was truly impressive.

Orville commented that each stop was meaningful, but visiting the Tomb of the Unknown and witnessing the changing of the guard there was particularly memorable.

Orville and Vincent were accompanied by their daughters, Kim Tarlas and Cheryl Pisane. As they toured the nation’s memorials, the women said they were grateful for their fathers to be seen and recognized for their service.

“There were a few times before we left that Dad would say, ‘I shouldn’t be going. I didn’t do anything.’ ... He didn’t see any combat, and that’s why he would say ‘I don’t deserve to go.’ But he did do something. He did exactly what he was supposed to do,” said Tarlas, Orville’s daughter. “It really was an honor, and made me very proud of my dad and my uncle.”

“At any of the memorials, random people would come up and thank them for their service,” noted Pisane. “Especially when it was teenagers, that to me was very touching.”

Even once they’d left Washington to return home at the end of a long day, the experience wasn’t quite over. When the veterans arrived in St. Louis, the honor flight group had arranged for other military, family and community members to welcome them back home. Even random civilians in the airport stood and clapped for them as they arrived.

“I had tears coming out of my eye. I couldn’t believe it,” Vincent recalled.

Both brothers said that from start to finish, they were impressed with the honor flight’s staff of volunteers and moved by the whole experience. It’s something they recommend any veteran do if they get the chance.