Vehicle was carrying over 120 pounds of marijuana products

Vehicle was carrying over 120 pounds of marijuana products 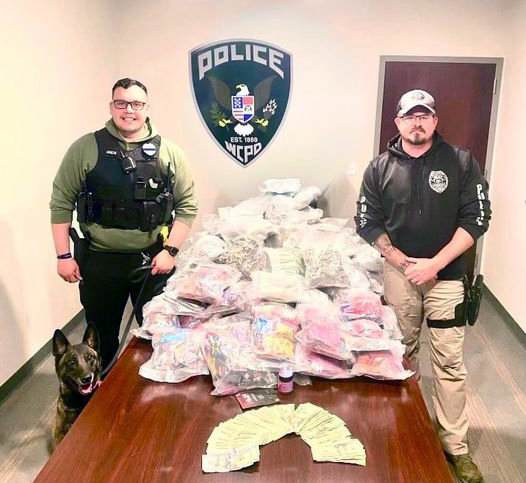 What started as a proactive traffic stop along Interstate 70 on March 22 turned into one of Wright City’s largest drug seizures in quite some time. Around 60 pounds of marijuana, 65 pounds of THC edibles and 2 pounds of psychoactive mushrooms were seized, according to documents submitted to the Warren County Circuit Court.

Jed Halliday, 34, of Louisville, Kentucky, was arrested and charged with drug trafficking, two counts of drug delivery, and two misdemeanor traffic violations, according to court records.

Wright City police reported that an officer noticed Halliday’s  vehicle on eastbound I-70 when he saw it cruising in the passing lane, following too close to another vehicle, and failing to maintain its lane. The officer initiated a traffic stop at the Wildcat Drive interchange, and upon contact with Halliday and a passenger, the officer called for Wright City’s K-9 unit.

Police said the department’s drug detection dog alerted to the presence of narcotics in the vehicle, giving them cause to search and find the illegal cargo.

Halliday allegedly claimed responsibility for the narcotics and claimed to have purchased them out of state. Police quote him as stating, “I saved up as much weed as I could, thinking I could take it home and make some money.”

Nearly $3,000 in cash was also seized along with the drugs. Warren County Prosecutor Kelly King has petitioned the court to order that the cash be permanently forfeited under Missouri law regarding currency associated with drug crimes.

Following the arrest, the Wright City Police Department took a picture of the two arresting officers and police dog posing with the seized narcotics and cash. The photo was posted on the police department’s Facebook page with information about the arrest and a commendation for the officers.

That Facebook post found its way into the social media site’s mysterious programming that decides what posts "go viral" and get seen by vast groups of people, and soon the police department was receiving hundreds of comments from marijuana supporters across the country. Most of the comments were some variation of the argument that marijuana is a harmless, victimless drug, that it shouldn’t even be illegal, and that Wright City police should find better things to do with their time.

“The Wright City Police Department has, and will continue to support individuals’ rights to lawfully use marijuana, which at this time is for medicinal purposes,” Police Chief Tom Canavan said in response to the criticisms. However, he said illegal marijuana trafficking has been associated with numerous public safety concerns.

“During the past two years, we have taken reports for robbery, burglary, armed criminal action and the theft of several firearms, all stemming from the illegal trafficking and sale of marijuana. ... As long as we have individuals committing these types of crimes within our city, we will continue to be vigilant in our efforts to stop them from occurring.”

Alderman Ramiz Hakim also responded to the controversy. On a Facebook post of his own, Hakim said he’s proud of the officers for preventing illegal and unregulated drugs from being moved through Wright City. He said the criticisms shouldn’t affect how officers do their jobs.

“If you disagree with a law, and think certain drugs should be legal, that’s ok! That’s a debate worth having,” Hakim commented. “But it is not the job of law enforcement to pick and choose which laws to enforce. Take that up with your legislators.”