Once new Wright City High School is built, part of old school would be demolished

The Wright City R-II School District plans to eventually demolish half of its existing high school facility after a new, larger high school is constructed, according to district officials.

Once new Wright City High School is built, part of old school would be demolished 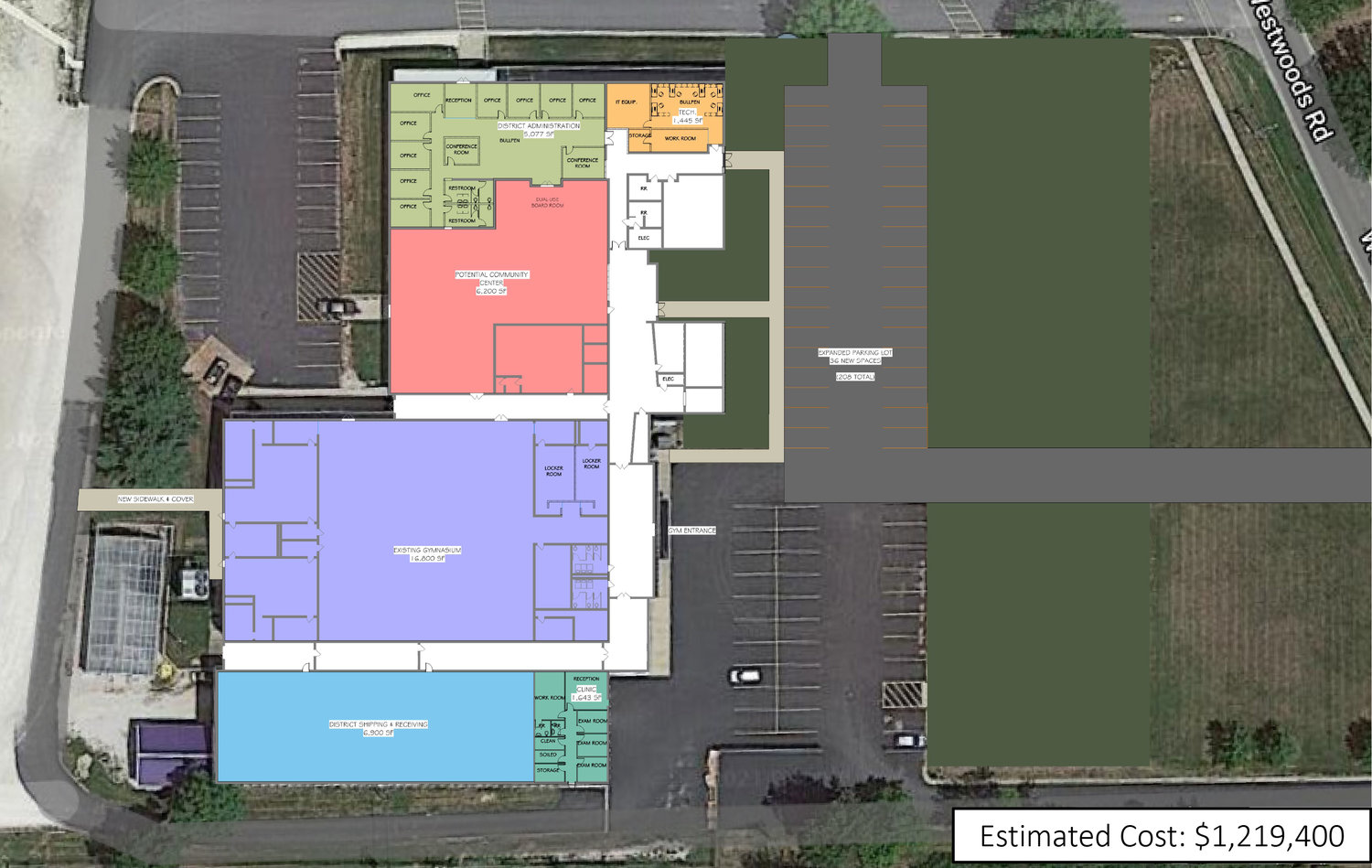 This image, taken from a Wright City School Board presentation, shows plans for Wright City current high school building after a new school is constructed. The dark green and gray portion to the right shows where the eastern half of the building will be demolished.
Wright City School District image
Posted Friday, March 11, 2022 5:00 am
Adam Rollins, Staff Writer

The Wright City R-II School District plans to eventually demolish half of its existing high school facility after a new, larger high school is constructed, according to district officials.

This April, voters within the Wright City School District will vote on two no-tax-increase measures to provide financing for construction of the new high school and smaller projects at existing schools. One of those smaller projects is renovation of the current high school as an administration building once students have migrated to the new school. However, districts leaders say it would be an irresponsible financial drain on taxpayers to try to renovate and maintain the older east wing of the building as part of the project.

The eastern half of the building, which contains most of the high school’s classrooms and the library, is a hodgepodge of utility systems and expansion areas that have been added to the school since it was first built in 1967. The mismatched collection of aging mechanical and electrical systems that weren’t designed into the original building, along with natural building deterioration, would require an unjustifiable cost to rectify, said District Superintendent Chris Berger.

“All those additions to the school were good ideas when they happened. ... But whenever you do add-ons, it tends to create a mechanical mess. And (that section) is in poor condition, everything from the rooftop down to the mechanical/engineering aspects of the building,” Berger explained.

He said the decision to remove the eastern wing of the building was made during early project planning. Architects and engineers examined the current high school, and advised the Wright City School Board and administrators that attempting to renovate the east side of the school would become a money pit, Berger said.

“It was going to be bad money after bad money if we tried to renovate that space,” he commented.

The demolition and renovation are currently predicted to cost $1.2 million.

What gets saved, what gets repurposed

The “newer” western section of the high school will be repurposed to serve a variety of district-wide and community-oriented functions, according to current project plans. District administrative offices will be moved into the remaining class spaces on the west side, along with a new office space for information-technology services.

Berger said that move will allow the current admin offices on Bell Road to be converted into a second location for preschool, doubling the district’s preschool capacity.

The southern end of the remaining high school wing will be converted into two new services for the district: a shipping and receiving ‘warehouse’ for district-wide supplies, and what Berger described as a “school-based health clinic.” He said the proposed clinic is particularly exciting.

“That’s a huge need for our community. We would have a place in proximity to most of our schools where we could serve our students’ health needs,” Berger said.

The high school’s cafeteria and band roomwould be converted into a large meeting chamber for the Wright City School Board, but also double as a space for community events, according to building plans.

The gymnasium in the school will remain largely unchanged. It will continue to serve as the high school-level competition gym until an equivalent facility is built at the new high school, Berger said. He explained that the timeline for the new athletic facility would depend on what financing voters are willing to approve.

Berger added that after a new competition gym is built, the old gym would become available for community uses and community sports programs.