After a season that saw the Warrenton boys basketball team win only once en route to a 1-20 tally, coach Mark Thomas was able to find some reason for optimism as the 2021-2022 season gets underway. … 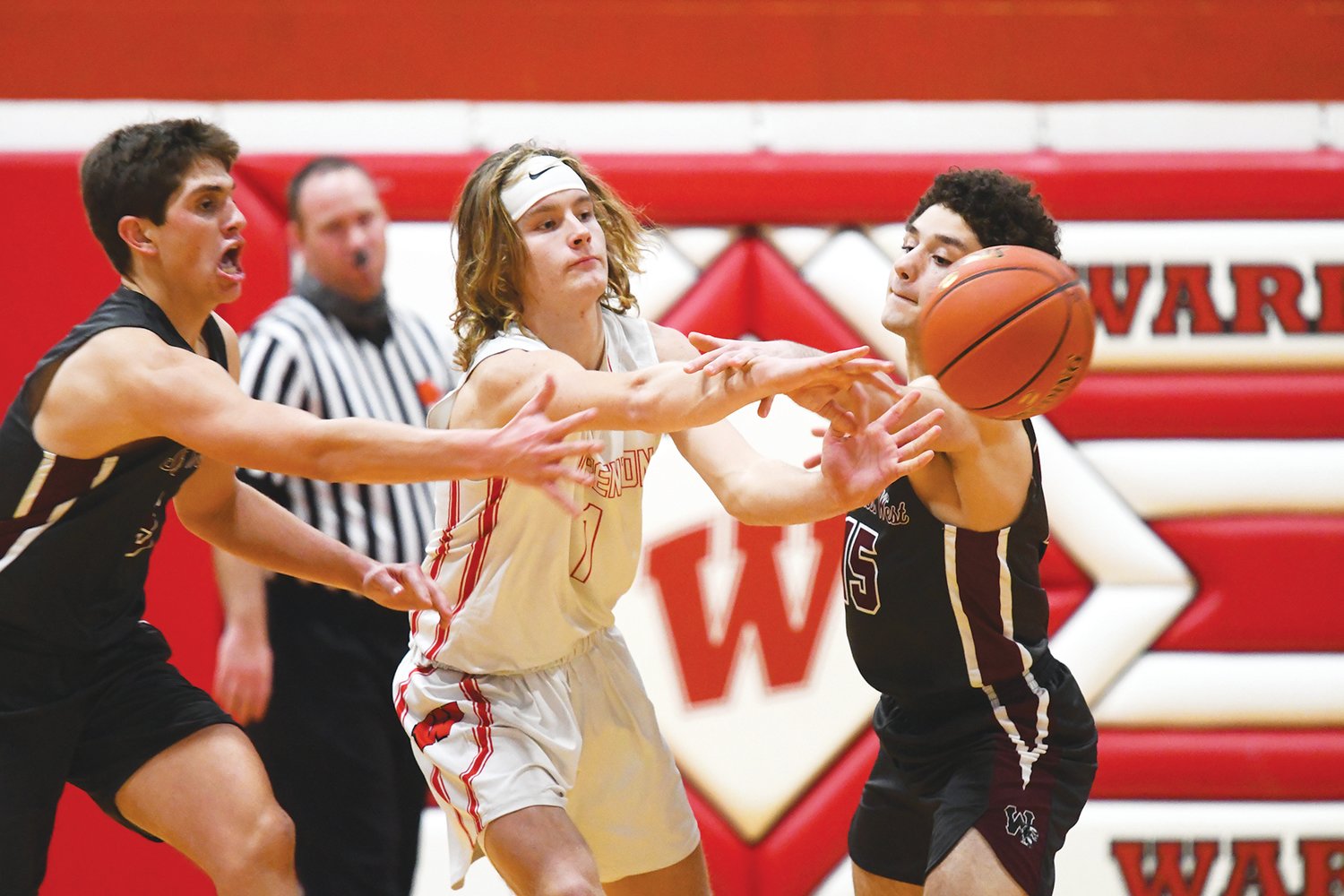 SENIOR LEADER — Warrenton’s Kolby Meine, center, passes the ball out of a trap during a game last season. Meine is one of three seniors suiting up for the Warriors this season.
Bill Barrett photo
Posted Friday, December 3, 2021 5:00 am
Jeff Stahlhut, Correspondent

After a season that saw the Warrenton boys basketball team win only once en route to a 1-20 tally, coach Mark Thomas was able to find some reason for optimism as the 2021-2022 season gets underway.

“We were inexperienced at the varsity level having only one returning full time starter and we started freshmen for most of the year. It was a struggle to get used to playing with each other having two full-team quarantines and several individual player ones during the season,” Thomas said before making a note of the Warriors’ effort. “We competed well in the majority of the games we played, so that was encouraging for the years to come.”

The biggest positive of playing as a very young team one year results in a team with lots of experience the next, and the Warriors will rely on several returning players to lead the way this season.

“Troy Anderson is running the point for us this year. His court vision and personal skill set has already made a big difference in our team. Joe Goldsmith, once back from his football injury, will be very impactful for us on both ends of the court,” Thomas told The Record. “I am expecting better leadership out of those two guys already which is great considering it is a big ask to have sophomores being leaders both vocally and with action. The seniors — Koby Meine, Issiah Jones, and Joseph Evans — should be able to help with that aspect as well with being in the program now for their fourth year.”

Given the experience of the team, Thomas believes this can be a productive season in ways other than the anticipated improvement regarding wins and losses. A big focus of this season will include every opportunity to learn from one day to the next.

“I look for us to compete in every game. Every time out is an opportunity for growth as individuals and as a team. I am changing the mindset this year to learning — win or lose — we will learn from it to make us better in the next game,” he said. “I’m excited to see what steps this team can take compared to last year. The pieces are there to have a good year, putting in the concentrated work will determine if that potential can be reached.”