Traffic was sticking point for aldermen during lengthy debate

Traffic was sticking point for aldermen during lengthy debate 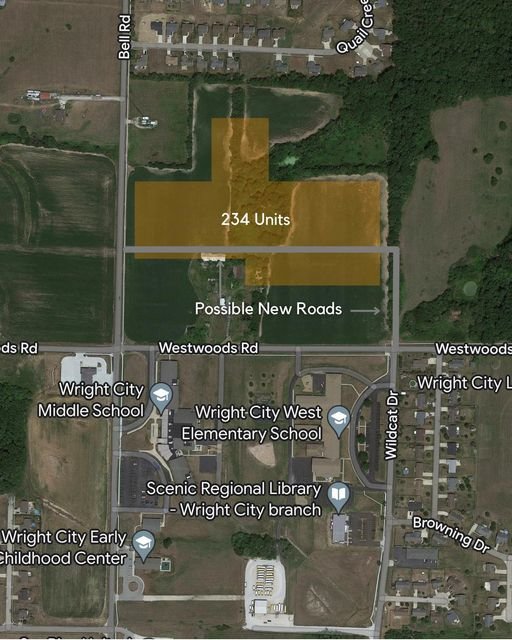 Plans for an apartment complex on Bell Road containing 234 living units were approved by the Wright City Board of Aldermen last week after a lengthy debate about whether the development would worsen the daily traffic jams that form around two nearby schools.

The apartment proposal was approved unanimously by the board during their public meeting on July 28, but only after more than an hour of back-and-forth about what responsibility the city can or should assign for helping to address traffic flow around the apartments.

Members of the public also expressed concerns about more housing causing a drop in water pressure, which is already low. Two commenters also voiced opposition to the idea of apartments, implying that any apartment building might eventually be converted to low-income housing.

To the water pressure issue, city officials replied that the public water district which provides service to the area is aware of the issue and capable of addressing it. For the low-income concern, Pollard Properties executive Adam Pollard stated that he plans for the apartments to be a profitable long-term investment by being priced for young professionals.

Considering the scope of the development, aldermen said they were actually surprised there wasn’t significantly more objection or concern from the public. They credited Pollard for taking significant time to visit with property owners in neighboring subdivisions and answer their concerns ahead of his official proposal.

“He’s done his research. He went door-to-door, he’s put in the effort to be in this community,” commented Alderman Nathan Rohr. “He’s already bettered this community by redoing other apartments. I can only imagine what he’s going to do with these new ones.”

Despite the compliments for Pollard, Board President Ramiz Hakim said he received numerous concerns about worsening the already-poor traffic around Wright City Middle School and West Elementary, just south of the proposed apartments. Twice per day on weekdays, backups from pickup and drop off spill onto Wildcat Drive, Westwoods Road and Bell Road, aldermen noted.

Hakim said he didn’t know what the solution to that concern would be, but that he was hesitant to approve the development without further study.

“Once we approve this, there’s no going back,” Hakim cautioned.

Mayor Michelle Heiliger noted that traffic in the area of Bell Road has been a known issue, and that the city will eventually have to improve the road to allow new development.

“It’s in the city’s comprehensive plan to widen Bell Road. That’s already something we know is going to happen ... probably sooner rather than later,” Heiliger commented.

Pollard also pushed back on the idea that his residents’ traffic would overly conflict with school traffic. Most drivers leaving the property would be spread out during the morning and afternoon, not happening all at once like the school traffic does. Adults going to work would also be leaving sooner and coming home later than students, and any children going to school could just walk the short distance from the property, Pollard said.

The developer also expressed frustration that he gave months of notice to the city government that this proposal was coming, and this is the first time aldermen had made a major issue out of traffic.

One nearby homeowner also came to Pollard’s defense, chastising aldermen for trying to hold Pollard responsible for traffic that mostly isn’t his fault.

“We’re hearing all kinds of concern about Wildcat Drive and Westwoods. Well the new city park is there. You guys are responsible for all the traffic that’s going to go in there. ... Then you’re putting this man through hell for a few apartments?” the homeowner said. “That’s the worst intersection right now. In my thinking, you need to put a traffic light there.”

Aldermen eventually reached a compromise on the issue, agreeing to approve the apartment development, but to also initiate an immediate professional traffic study to begin planning improvements to the surrounding roads.