For 13 hours last week, a section of Veterans Memorial Parkway in Wright City was closed as emergency workers responded to the crash of a tractor-trailer carrying hazardous waste material. 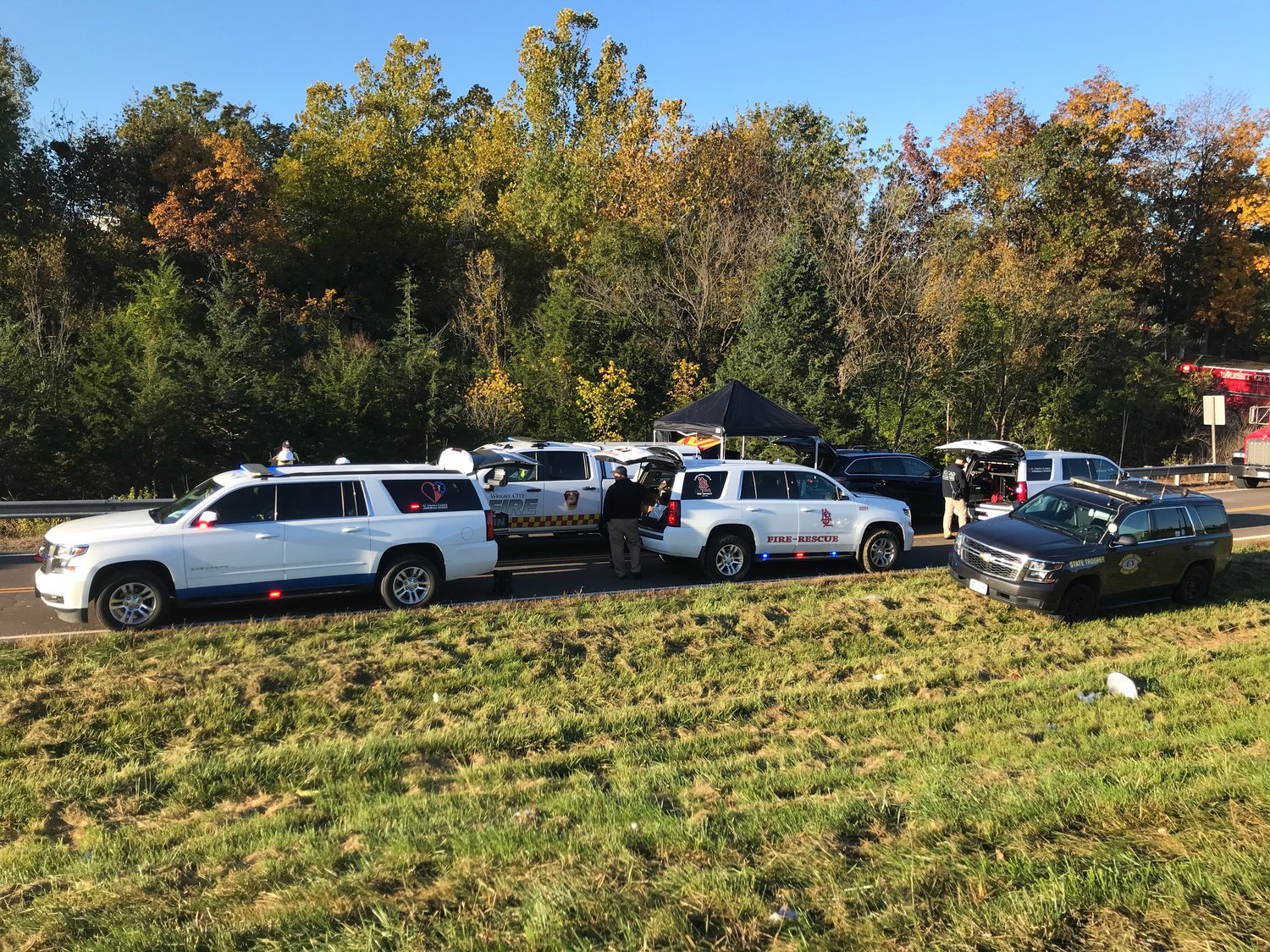 For 13 hours last week, a section of Veterans Memorial Parkway in Wright City was closed as emergency workers responded to the crash of a tractor-trailer carrying hazardous waste material.

The incident was a chance for responders to put hazmat training into action to prevent a danger to the public or environment.

Around 4:30 a.m. on Oct. 26, a tractor-trailer overturned along the parkway east of Elm Street, sliding about 50 feet down an embankment into a dry creek bed.

While rescuing the passengers, responders became aware that the tractor-trailer’s cargo was a mix of various solid and liquid waste products, some of which were marked as hazardous material. The truck was transporting the waste to be incinerated.

A small amount of unknown chemicals were leaking into the dry creek bed. The chemicals eventually turned out to be non-harmful household products, but responders at the time were afraid different chemicals could begin having dangerous reactions with one another, said Fire Chief Ron MacKnight.

MacKnight said the crew on scene took in that information and enacted a hazmat response plan that they train for at least once a year. The incident was a reminder that firefighters don’t just respond to fires.

“We should really change our name to the ‘Wright City All-Hazards Rescue Department,’” MacKnight joked, adding that as soon as it became a hazmat incident, the response became much more cautious. “It’s a more methodical process to mitigate an incident like that. You’ve got to know what containers it’s carrying, is there any issue if stuff gets mixed together. ... It becomes a hurry-up-and-wait situation.”

Step one was to contact an officer with a hazmat incident team jointly maintained by emergency districts in Warren, Lincoln and St. Charles counties. While that officer was coordinating response and cleanup with crew chiefs, Wright City Fire and St. Charles Ambulance launched drones with video and thermal cameras to monitor the chemical leak.

Because of the nature of the incident, Missouri Department of Natural Resources (DNR) was also brought into the response, coordinating a plan to contain the spill as workers with Skyline Towing prepared to extract the overturned trailer. The crews worked together to build a dam in the creek bed to prevent any chemical from escaping the area.

Once the trailer was upright, and the cargo either removed or secured for transport, all that was left was to coordinate a specialized cleanup company to remove the chemical spill.
MacKnight said this sort of incident is always a worry with both an interstate and a railroad running through the area.

“All of our firefighters are trained in hazardous material response. ... It’s always in the back of our heads,” the chief said. “We try really hard to pay attention to what kinds of hazardous materials are coming up and down the highway.”

MacKnight thanked all the partner agencies that helped Wright City’s responders to successfully contain the incident.

Unfortunately, there was another safety risk in the area that firefighters have a harder time preventing. At least two more vehicle crashes occurred on Interstate 70 the morning of the incident, as drivers were distracted by the emergency vehicles on Veterans Memorial Parkway. MacKnight said drivers need to practice extra caution by slowing down and focusing on the road ahead of them when they see emergency vehicles in the area.