Aldermen may approve gas station next month, but prospects are slim for two housing proposals

The Warrenton Board of Aldermen sent a proposal for a gas station back for further review during their Dec. 21 public meeting, where they also gave two housing projects what amounted to a temporary …

Aldermen may approve gas station next month, but prospects are slim for two housing proposals 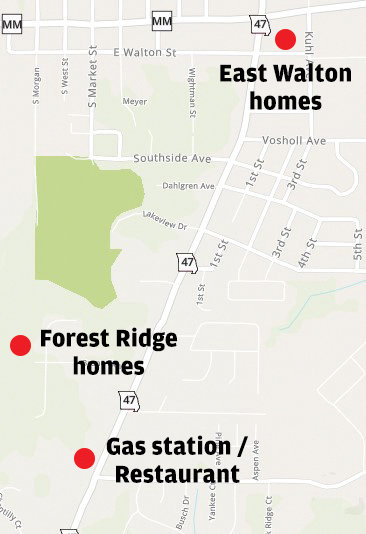 This map shows the locations of three proposed developments in Warrenton that have received pushback either from residents or from city officials. Approval votes for each development have been postponed until January.
Posted Friday, December 31, 2021 5:00 am
Adam Rollins, Staff Writer

The Warrenton Board of Aldermen sent a proposal for a gas station back for further review during their Dec. 21 public meeting, where they also gave two housing projects what amounted to a temporary stay of execution.

At issue were three projects:

• A gas station, convenience store, restaurant and car wash, with associated drive-thru lanes, at the corner of South Highway 47 and Warrior Avenue.
• A 17-building housing complex with 66 living units, located south of Morgan Street and west of the Forest Ridge subdivision on Brune Parkway.
• A three-building housing complex with 10 living units on East Walton Street, behind the Kroger/Orscheln shopping center.

The gas station facility proposed by Nirdosh LLC had been recommended for approval by Warrenton’s citizen-led Planning and Zoning Commission, with some recommendations including visual and sound screening around the property, along with traffic control elements to mitigate the store’s impact on Highway 47 traffic flow.

When the development was presented to aldermen on Dec. 21, project engineers had already made adjustments to accommodate those recommendations. But they also made one other adjustment that the city didn’t expect, and are having to go through additional rounds of approval because of it.

The issue: The planning and zoning commission approved a site plan for the gas station that included four concrete “islands” for fuel pumps. But engineers added a fifth island to the site plan presented to the aldermen. That was enough of a change for the majority of aldermen to send the plans back to the planning and zoning commission for a new approval.

“Planning and zoning agreed to the four pumps, and if we don’t send (this project) back to planning and zoning, somebody’s going to come in here some other time with six pumps instead of four,” said Ward 1 Alderman Larry Corder. “To stay fair with everyone, we need to send this back to P&Z.”

Ward 3 Alderman Jeff Jaspering was the only board member who opposed setting the project back over what he saw as a relatively small change. Somewhat exasperated, he declared “I just don’t see how adding another pump is going to change (P&Z’s) mind.”

Aldermen voted 3-1 for a new review and approval from the Planning and Zoning Commission, with Jaspering voting against. Aldermen Jack Crump and Steven Cullom were absent.

The proposed housing complex south of Morgan Street got a sour reception from aldermen, partly over issues of housing density and lack of parking, but primarily because of traffic concerns on Morgan Street leading to the area.

“Morgan Street is not currently designed or intended for the intensity of development occurring along that corridor ... which will result in continued degradation of the surface,” said city Planning and Development Director Tim Burks.

Aldermen agreed with that concern, leading to a frustrated comment from developer Ben Beckemeyer, who had similar difficulties with another upcoming development along Morgan Street.

“It’s ridiculous. If the city has streets and doesn’t want to improve them, you can’t bring developers in,” Beckemeyer said.

Ironically, the developers never wanted to connect to Morgan Street in the first place, according to engineer Bart Korman.

They want to use Brune Parkway and its connection to Highway 47 as the primary access. They only added a connection and extension of Morgan Street because that’s part of the city’s long-term development plan, Korman said.

Korman negotiated with aldermen to postpone their decision on the project until January in case some kind of adjustments can be made to save the project. The board agreed, but said the prospects are slim.

Aldermen granted a similar postponement for a housing proposal on East Walton Street, for which Korman is also the engineer.

For this project, city officials are concerned about plans to build homes that back up to the loading docks of active commercial businesses, without any sort of buffer between them.

The area where the housing is proposed is zoned for future commercial development, but Korman said the currently empty lots with poor visibility work better as homes. He convinced aldermen to put off any judgment while he works on buffering plans that can earn the city’s support.

Although they agreed, aldermen were pessimistic for the project.

“It’s a great project, but not for there,” Alderman Corder commented.