Candidates make their case to voters

Candidates for regional state and federal officers are making their case to local voters in the final weeks before primary elections on Aug. 2. Public forums in Wright City on July 19 and Warrenton …

Candidates make their case to voters 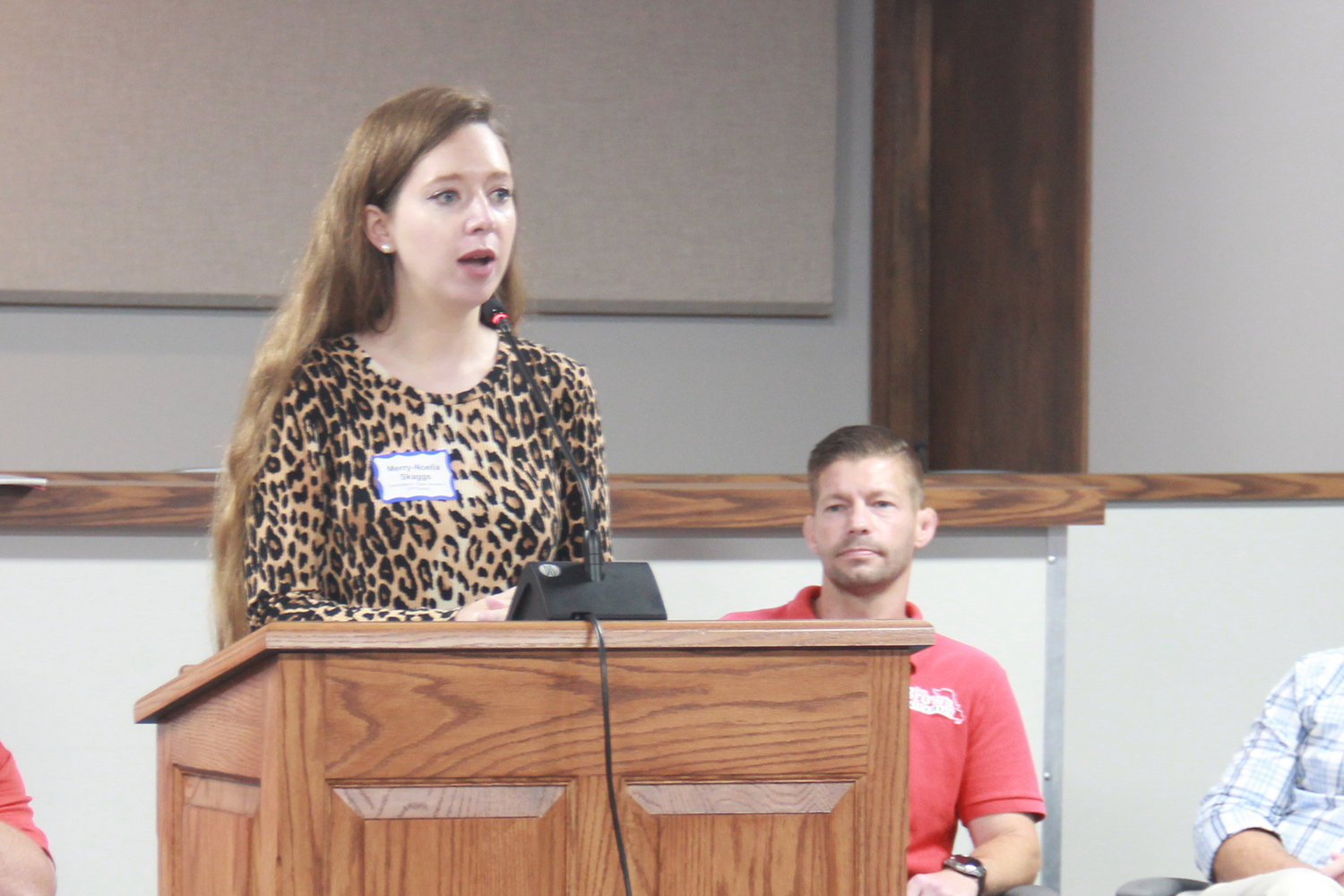 NURSE FOR SENATE — Merry-Noella Skaggs, of Pacific, a candidate for Missouri State Senate, describes how COVID vaccine mandates negatively impacted her career, while a lack of state requirements for healthcare staffing negatively harms patients. Skaggs was one of a dozen candidates who spoke at a forum in Warrenton Tuesday.
Adam Rollins photo
Posted Thursday, July 28, 2022 12:34 pm
Adam Rollins, Staff Writer

Candidates for regional state and federal officers are making their case to local voters in the final weeks before primary elections on Aug. 2. Public forums in Wright City on July 19 and Warrenton on July 26 gave voters a chance to meet face-to-face with the people who seek to represent them.

One more forum, aimed at voters aged 18 to 30, is scheduled in Warrenton on the evening of July 28.

During this Tuesday’s forum, candidates running for U.S. Congress, Missouri Senate and Missouri House of Representatives attempted to differentiate themselves in races crowded with Republicans. A total of 12 candidates — 11 Republicans and one Democrat — spoke at the forum.

Of the Republicans, most touched on topics that have become standard-issue conservative talking points. Candidates running for the U.S. Congress talked about wasteful spending and the harms of illegal immigration. Missouri State House and Senate candidates said they want to keep critical race theory and transgender ideology out of schools. Candidates for every race expressed their complete support for Second Amendment rights.

The notable distinctions between candidates emerged when they delved into how their life experiences would guide their mission as an elected representative. For example, two of the three U.S. House candidates who came to speak are military veterans whose ideas on government were heavily shaped by their time in service.

“At the end of every year, we’d do what’s called a ‘SpendEx’ — we spent all the money we had in order to get more money from Congress next year. ... I was a waste of taxpayer funding,” Smith commented.

Smith also recounted horror stories from the Department of Veterans Affairs that lead him to believe in significant reforms to how America cares for its veterans.

Among those who would represent Warren County in the state Senate, several candidates expressed policy goals heavily colored by business and professional experiences.

Ben Brown, for example, said government mandates during COVID had harmed his restaurant and convinced him to fight against government overreach.

Merry-Noella Skaggs said she worked as a registered nurse until she was fired over her refusal to receive the COVID vaccine. She said the state government needs to reform healthcare regulations to ensure caregivers and patients alike receive better treatment.

Bob Jones, meanwhile, said decades as a business owner and member of community organizations made him realize how dysfunctional and uncivil the Missouri Senate is. Those are qualities that he wants to reverse.

Professional interests also colored all three candidates who would represent Warren County in the Missouri House.

Longtime teacher and state education department employee Rene Yoesel said her work involving state budgets convinced her of the need for more transparency to ensure tax dollars are being well-spent on public services.

Joseph Holiway said personal and professional experiences with Missouri’s Department of Social Services had revealed a lot of solvable failings in how the state cares for its most vulnerable citizens.

And retired Highway Patrol trooper Jeff Myers said he spent years advocating on behalf of troopers in Jefferson City, teaching him that people need to be willing to be their own advocates, and also giving him a close look at the legislative process.

The final forum for candidates ahead of next week’s primary is scheduled for 6 pm. on July 28 at the Walton Street Annex Building in Warrenton. The event is aimed at providing younger voters a chance to ask questions.