After two years of working remotely with supporters to collect donations for student scholarships, the group of volunteers who organize the Blue and Gold annual fundraiser brought their signature … 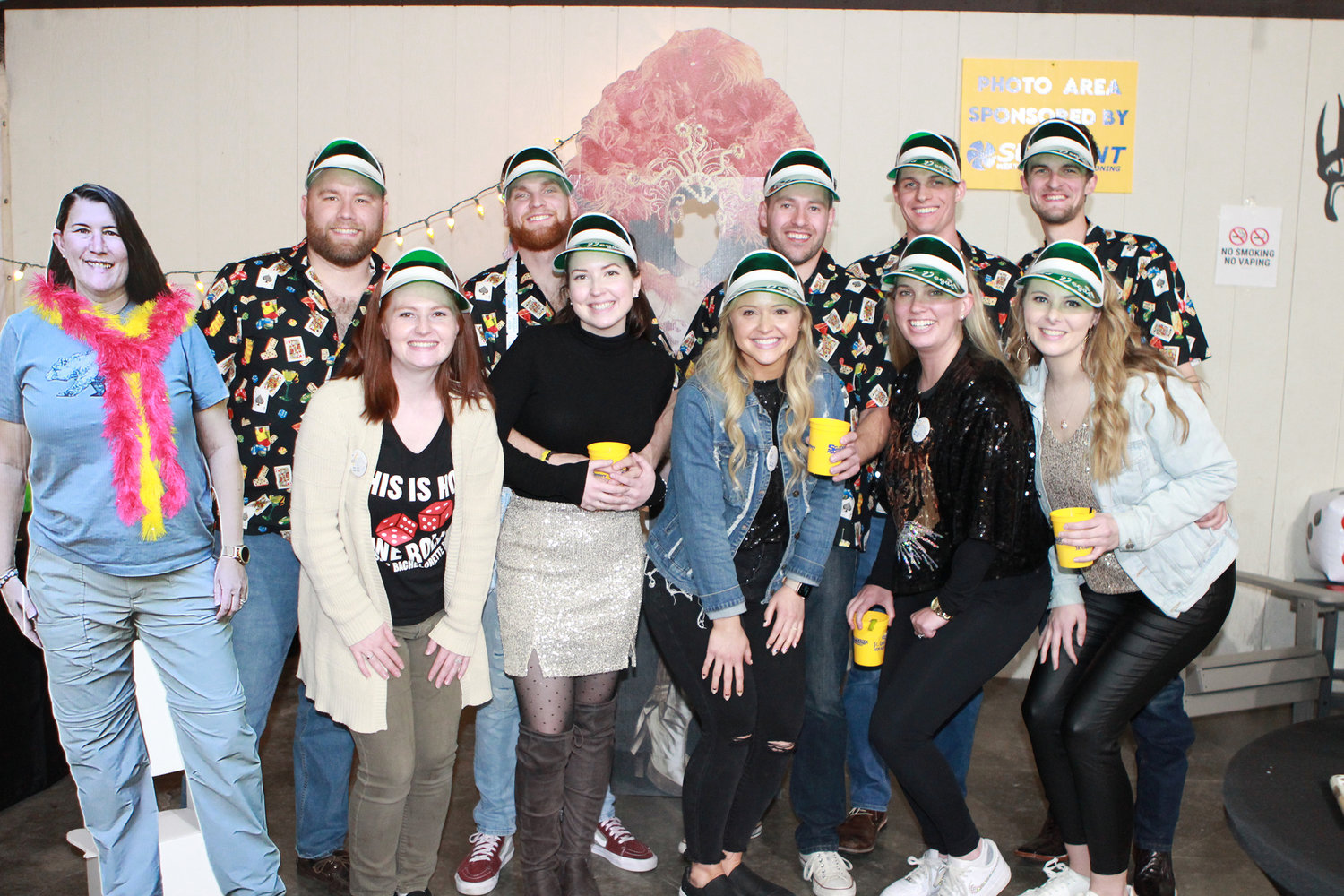 VEGAS COMES TO TOWN — Attendees at the annual Blue and Gold dinner on Saturday were enthusiastic about the Las Vegas theme for the event, coming with their own in-theme outfits. Pictured in the event’s photo area are, in front, Mackenzie Lewis, Hannah Heath, Katie Bain, Katie Pall, and Alicia Hallemann. In back are Kyle Lewis, Chance Ludy, Gus Wehmeier, Brice Pall, and Dustin Ludy.
Adam Rollins photo 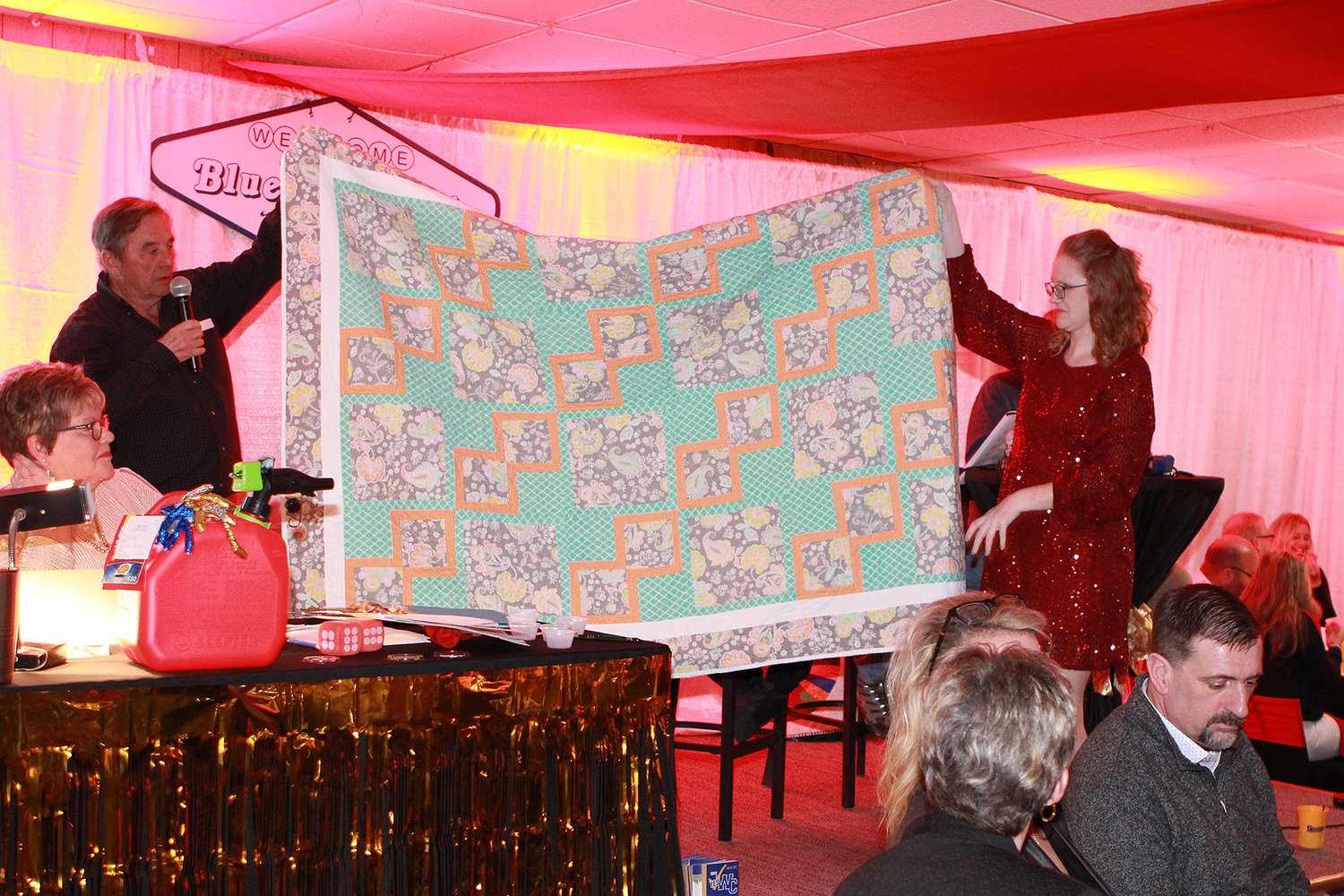 QUILT FOR AUCTION — Auctioneer Charlie Clark and volunteer Becky Schriener display a quilt that was one of dozens of items up for auction during the Blue and Gold scholarship fundraiser March 19.
Adam Rollins photo
Previous Next
Posted Thursday, March 24, 2022 5:00 am
Adam Rollins, Staff Writer

After two years of working remotely with supporters to collect donations for student scholarships, the group of volunteers who organize the Blue and Gold annual fundraiser brought their signature event back in a big way this past weekend.

The Blue and Gold dinner and auction, hosted on March 19 at the Wright City Lions Club, took in more money than the organization has ever collected in one year, said co-organizer Kristin Beckmeyer.

Beckmeyer credited great work by volunteers to collect good auction items, along with an above-average turnout for the dinner and auction (around 360 people). There were also a lot of people and organizations who simply gave money to help sponsor the fundraiser. All the individual contributions, from hundreds of people, add up to a lot of support for Wright City students, Beckmeyer said.

The largest single contribution from the auction portion of the event came from a wave-making contest for naming rights on the Wright City High School football stadium. Internet service provider Gateway Fiber took that honor with a bid of $27,000. Other naming rights for school facilities were hot ticket items as well, Beckmeyer said.

The huge infusion of funding is good news for the Wright City High School Scholarship Fund, which helps local students pay for tuition for college or post-secondary education. With two years of online-only auctions and fundraisers due to the COVID pandemic, the fund was beginning to struggle to continue providing for graduates, Beckmeyer said. Donation levels without the in-person event just weren’t sustainable.

But with the record-smashing event it just had, the scholarship fund will be able to get back on track. Beckmeyer said the number of students who receive scholarships each year varies widely depending on how many qualify. Students typically receive $700 to $1,400 per year, renewable for up to four years.

The Blue and Gold fundraiser is made possible by dozens of people working together, with a core group of 10 to 15 starting months in advance to get the dinner and auction planned, Beckmeyer said. This was the 22nd year for the fundraising event.

“The community support is just amazing. I’m overwhelmed every year at the support from this small community,” Beckmeyer commented. “We want to give a huge thank you to everyone. It’s such a wonderful experience year after year. After not having it for two years, it was amazing to have everyone show up, ready to go.”