The Warren County Ambulance District has announced that Darren Lenk has been selected to permanently lead that district as chief.

Lenk has been serving as interim chief since April following the … 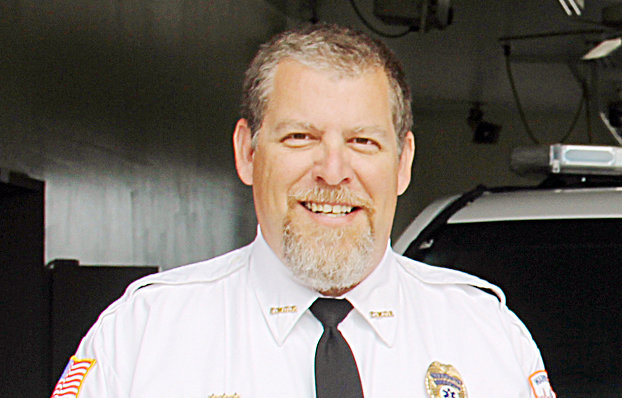 The Warren County Ambulance District has announced that Darren Lenk has been selected to permanently lead that district as chief.

Lenk has been serving as interim chief since April following the retirement of Chief Tim Flake. Lenk had previously served as a deputy chief since 2018, and has been a medic for 33 years. Lenk was endorsed by the ambulance district’s staff members to officially take over as chief.

The ambulance district’s board of directors voted in agreement with that recommendation during their monthly meeting in June. Their decision was publicly announced on June 23.

Board President Merlyn Petersmeyer said the staff’s confidence in Lenk was important to the board’s decision, as well as Lenk being a local candidate with a wealth of experience.

“It was unanimous — all the employees and all the board members thought he was a good choice,” Petersmeyer said. “We were fortunate that we had somebody available to us that everybody could agree on. We could have hired somebody from out of town or out of state. … But if you don’t have confidence (of the staff), it doesn’t work too good.”

Lenk believes his three decades of experience and strong working relationships with his staff will be a central asset to his work as chief.

“Bringing a good working relationship with the employees, understanding what they want and what they need, is going to be a really good strength,” Lenk commented following the decision. He said he’s used his leadership roles at the district to have a hand in “changing the culture in the district, trying to come into a more modern, progressive age, and thinking outside the box.”

Lenk enters office at a time when medical staff are seeking concrete improvements to the district’s operating procedures. Following the retirements of Chief Tim Flake and Deputy Chief Mike Eskew in April, staff publicly voiced concerns that the district had been falling behind on best practices related to training, supply acquisition and management of controlled medications.

The district’s crew supervisors said those concerns are now being addressed, and Lenk told The Record he hopes to see continued progress that will make the staff proud to work in Warren County.

Taking care of the community, he said, starts with ensuring that staff feel well prepared, supported and equipped for their duties.

“If we have happy employees, they’re going to take good care of the citizens,” Lenk commented.

The new chief’s long history in the medical field starts with his father, who was a paramedic and administrator for Lincoln County Ambulance District. Although Lenk didn’t immediately follow those footsteps, he eventually fell in love with the profession.

“Every day is different. There’s nothing ever the same no matter what you try to do,” Lenk explained. “When you work at a factory or a mechanic’s job, it’s pretty much the same thing every day. But when you come in for a shift here, you can’t anticipate what that day’s going to bring. That was a thrill, knowing everything’s going to be different.”

Looking to the future, Lenk said it will be important for the district to plan for the long-term growth in services needed for Warren County, and develop the resources and training to meet those needs.

Short-term, he said that means more cross training with other emergency responders such as firefighters and police, which Lenk and other medics believe has been a shortfall in this area.

“One of my bigger goals is to make sure that everybody who is a first responder ... are all trained to the best of our ability,” Lenk commented.

Long-term, Lenk said the district needs to plan for acquiring more ambulances and recruiting more staff to run a growing number of medical calls. He’d like the district to establish its own in-house training program for new medics, who would hopefully choose to become full-time staff in Warren County.

Board president Petersmeyer said he hopes to see the enthusiasm for Lenk’s appointment continue for a long time. He added that as of now, the district does not plan to appoint any deputy chiefs, and will instead continue to rely on crew supervisors who stepped up to fulfill additional duties over the last two months.